Some pre-release samples have arrived! (=ﾟωﾟ)ﾉ 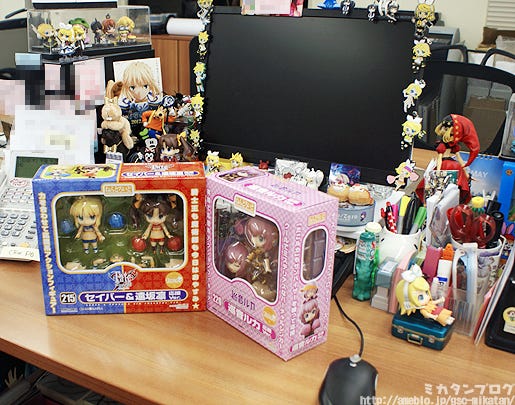 Today I’ll be taking a look at two separate Cheerful JAPAN! products that were sold to help relief efforts in the Touhoku region after the tsunami and earthquake last year.

A big thank you to everyone who supported the project! 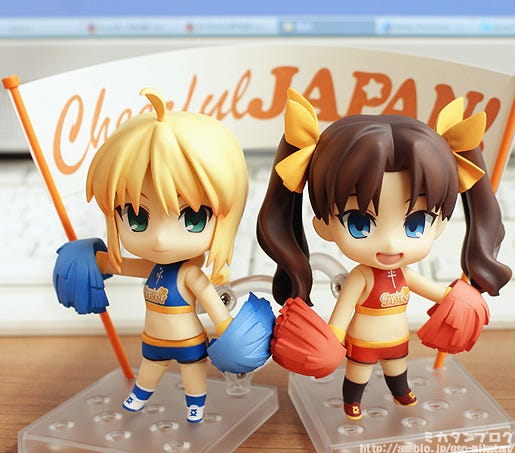 The 8th product in the Cheerful JAPAN! series:

The eighth product to join the Cheerful JAPAN! project is a set of two Nendoroids of TYPE-MOON’s popular characters – Saber and Rin Tohsaka, both wearing adorable cheerleader outfits, and ready to cheer on for everyone who needs it! 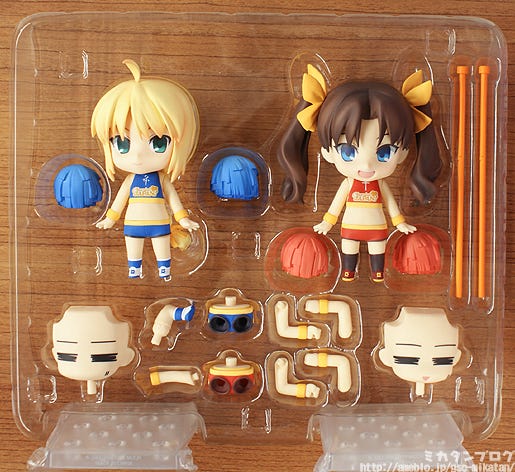 You can see hoe nicely the two of them match up just by looking at them in the packaging! They each come with pompons that match their image colors, lazy expressions and sitting parts – plus they also come with a Cheerful JAPAN! banner they hold up together!

This version of Saber features a braided ponytail which is fitted with a Nendoroid joint. Rin’s twintails are also as always fitted with joints allowing for a wide variety of poses from both of them! 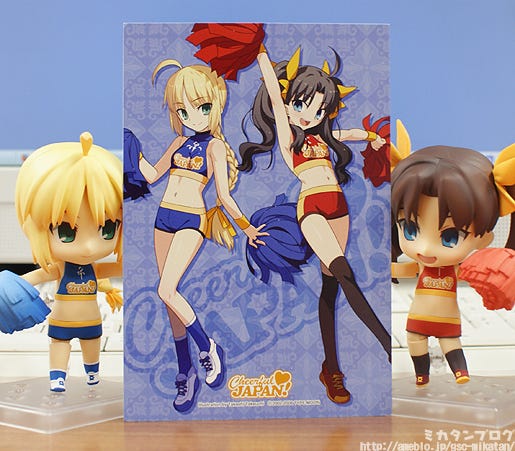 Takashi Takeuchi’s illustration of a younger version of the two girls!

Takashi Takeuchi specially drew this illustration for the Cheerful JAPAN! project, and a postcard of the illustration is included with the Nendoroids! A rare bonus indeed!

The Nendoroids can take the exact same pose as the two from the illustration! The postcard can be found between the inner cardboard of the package, so make sure you don’t accidentally throw it away! 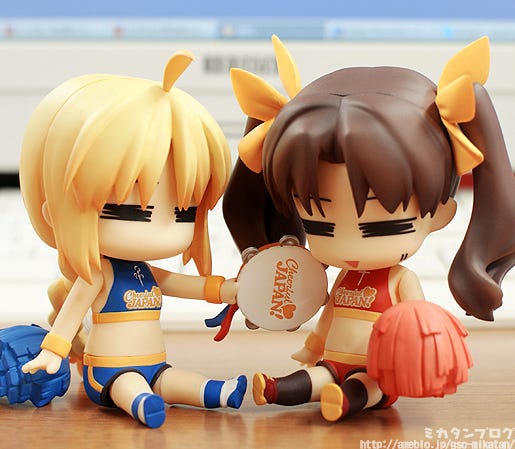 When you put the lazy expression on both of them along with the sitting parts they look too cute next to each other!! It’s so relaxing to look at them!

Saber is also holding a tambourine, but that is in fact included with a different figure… 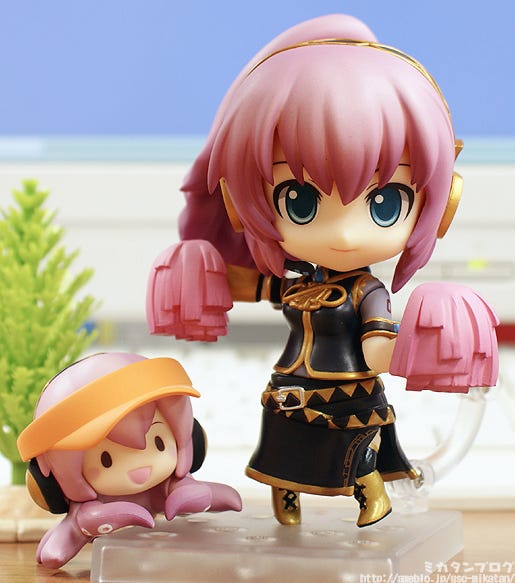 The 9th product in the Cheerful JAPAN! series:

The ninth product to join the Cheerful JAPAN! project is this Cheerful Ver. of the popular Nendoroid Luka Megurine!

She comes with all the optional parts from the original Nendoroid, along with new parts such as pink pompons and a tambourine to cheer everyone on! Luka also comes with all new ponytail hair parts!

She comes with ponytail hair parts!

Plus the little Nendoroid Petite sized Octo-Luka comes with an orange sun cap featuring the Cheerful JAPAN! logo so that he can cheer as well! 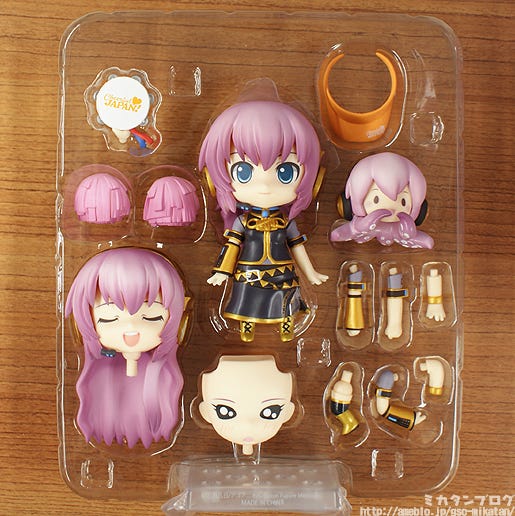 Everything that came with the original Nendoroid Luka is also included, along with all the new ‘Cheerful’ extras!

Plus some of the arm parts that were a single part have been separated into upper arm and hand parts for even more options! 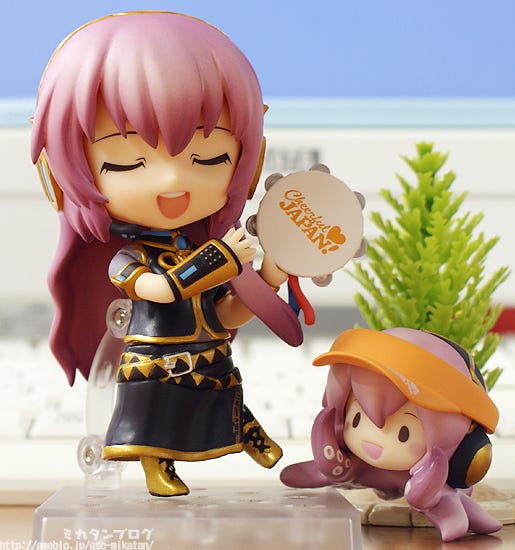 A singing face and tambourine!

She comes with both the ponytail and her standard long hair and you can either hairstyle with any expression! Plus the tambourine really suits her singing face nicely! 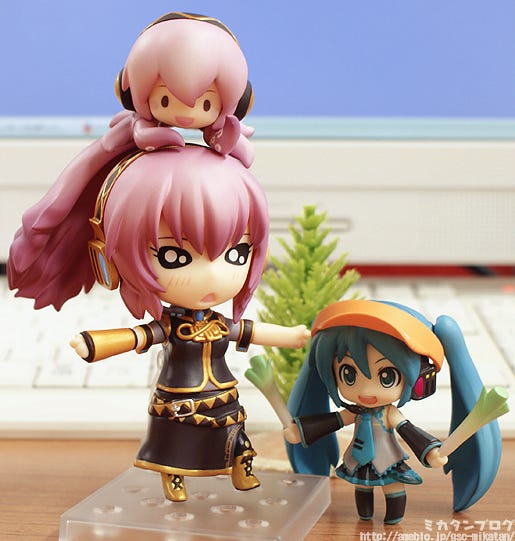 She looks even better spinning around with the ponytail! The visor that the Octo-Luka wears us Nendo Petite sized, so you can also put it on some of your favorite Nendos! (･∀･)ﾉ 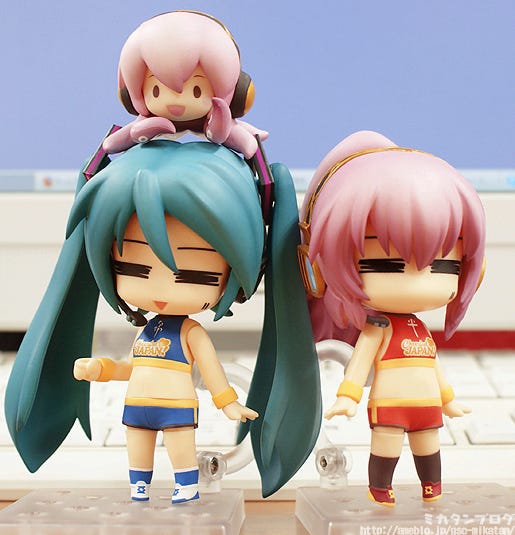 Switching parts around!
One of the funnest things you can with Nendoroids is switch around the parts! I think this is the first ever Nendoroid body to show off so much skin, so it might be fun to use it with some other characters! :P 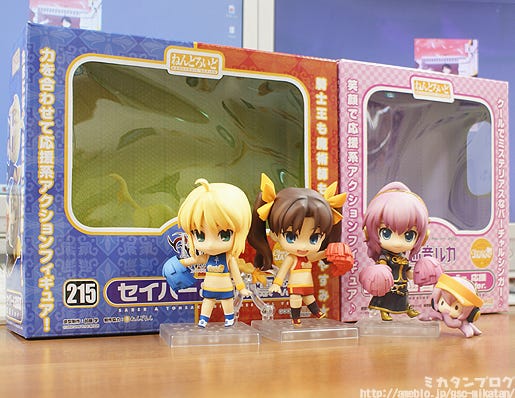 The 8th product in the Cheerful JAPAN! series:

And the 9th product in the Cheerful JAPAN! series:


They’ll be shipped out to everyone who ordered tomorrow! (`･ω･´)ゞ
Contact the Good Smile Online Shop if you have any queries about your order!