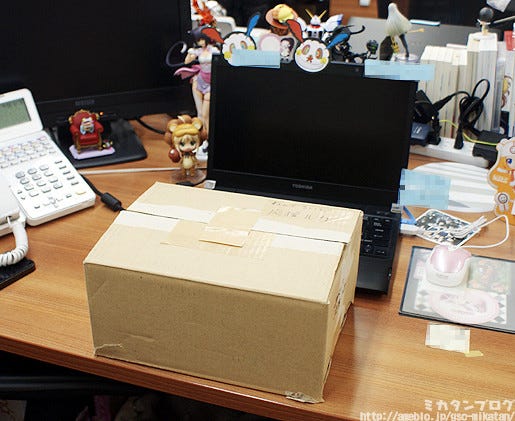 While wandering around the office, I found an interesting looking box at Sacchan’s desk…

As it’s the first prototype review of the year, I can’t wait to get started!

…or so I thought…. but my beloved Sony Alpha 350 camera is behaving quite strangely… it’s still working, so I’ll continue using it for now… it’s just acting up sometimes. This camera has been with me on the best of days for many years… I can’t just abandon it! 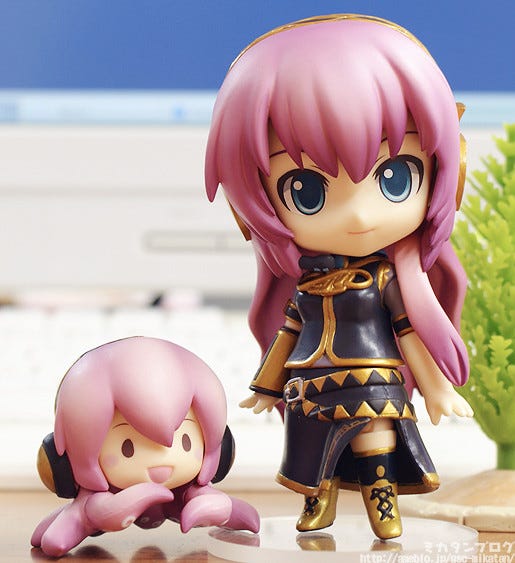 The first figure review for the year will be…

The 9th product from the Cheerful JAPAN! Project:

A special Cheerful version of Nendoroid Luka is here to join the rest of the Cheerful JAPAN! series! Along with Octo-Luka! 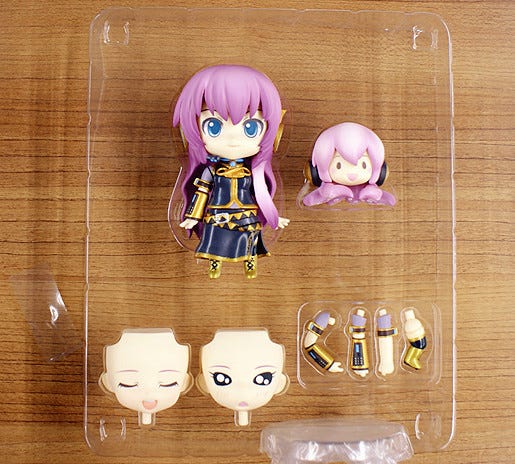 As always, all the original parts are included!

But there are also various ‘cheerful’ version extras!
The arm parts on this version are also separated in a better way. There is a connector between the upper arm and hand parts, allowing you to exchange hand parts, and rotate them! 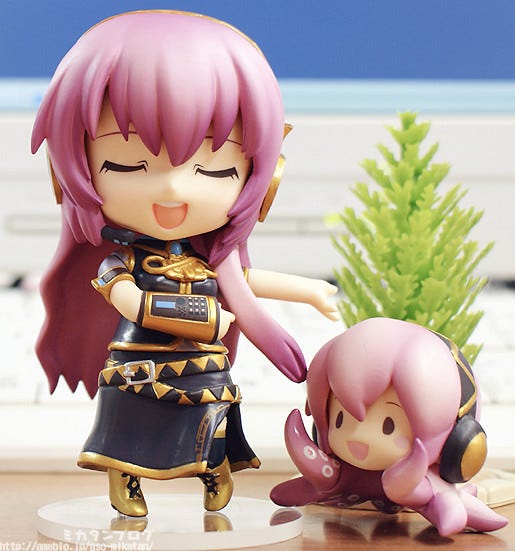 Singing with her eyes closed… Luka looks so mature compared to the other Vocaloids. The Octo-Luka next to her also has two posable tentacles! Lovely! 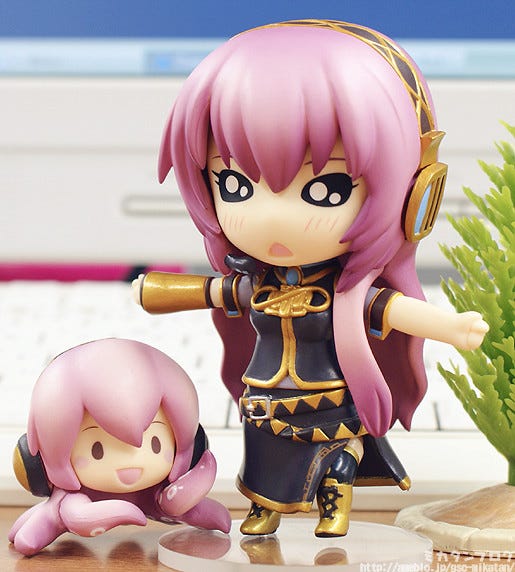 She also has hands spread out to the left and right, which all together let you recreate the pose from the Double Lariat music video! I really love Agoaniki’s songs! They’re really touching. (I even went to Osaka to watch the live :P) 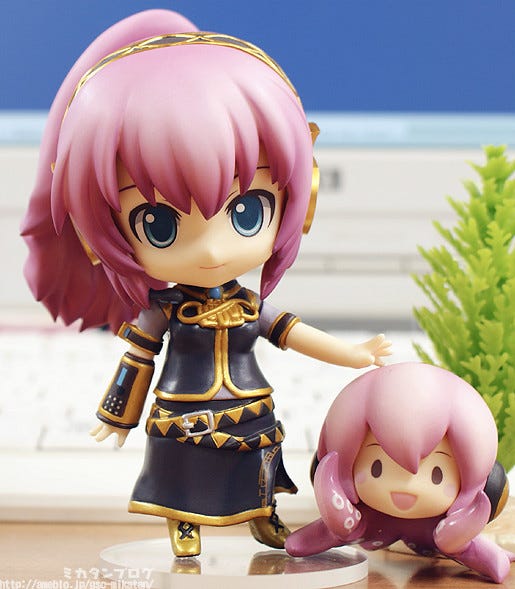 Now we’ll take a look at the Cheerful parts!
First up is her ponytail!

Luka has tied up her long hair so she can better cheer on for everyone! It’s amazing how different she looks by just changing her hairstyle… but the ponytail really suits her! Somehow it makes me want to put on apron on her… 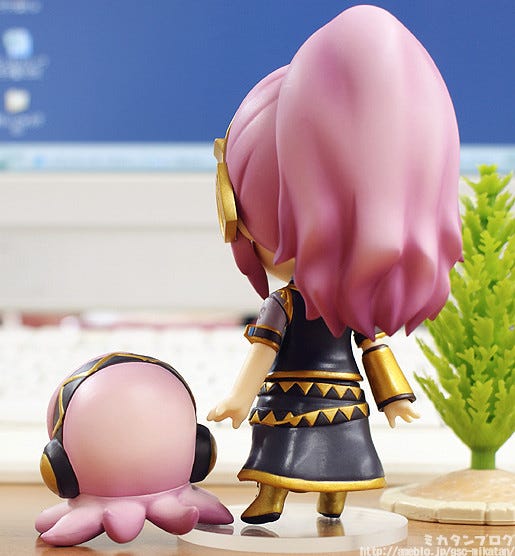 You can even see the little waves at the tips of her hair! The ponytail is also fitted with a joint allowing you to move it around however you like!

The back of Octo-Luka is also adorable! It’s so round! xD 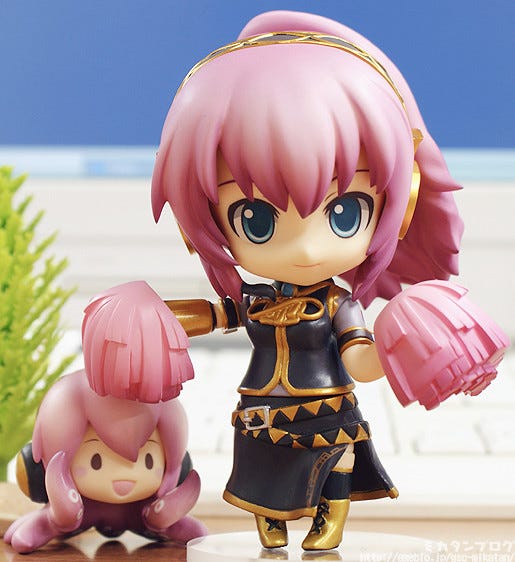 As with all the previous Nendoroids in the Cheerful series, Luka comes with her own pink pompons to cheer everyone on! If Luka were to cheer for me, I know I’d be able to get though the day with no problems!! :P

She also comes with a new bent left arm!
Luka normally has a kind of bracelet covering up her arm, but that was removed for the bent arm. If you look at the picture below an compare the arms it might be easier to see what I’m talking about. In order for her to be able to hold the optional parts, we needed to replace the big bracelet with a smaller gold ring – I think it suits her quite nicely. 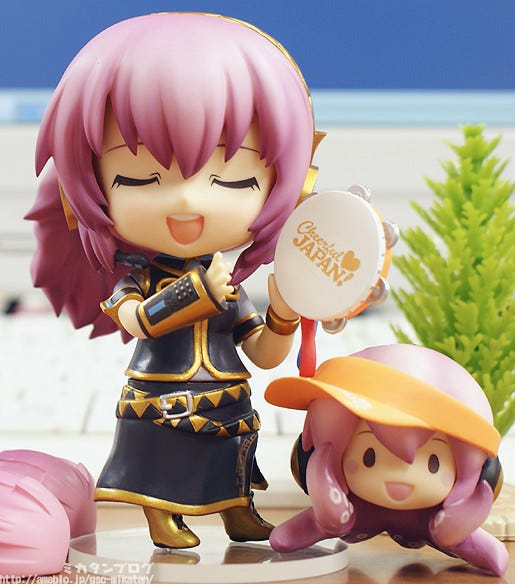 She also comes with a tambourine!… and Octo-Luka has a sun-visor!

Both of these have the Cheerful JAPAN! logo printed on them! The sun-visor is Nendoroid Petite size, so you can attach it to other characters as well! (Well… at least most characters… there might be some it won’t fit on!)

The 9th product from the Cheerful JAPAN! Project:

■ She will cost 3500JPY.
■ Shipping is free in Japan, and 2000JPY overseas.
■ For each figure sold, Good Smile Company will donate 1000JPY to aid relief efforts.

Please note the following if you’re interested in ordering: