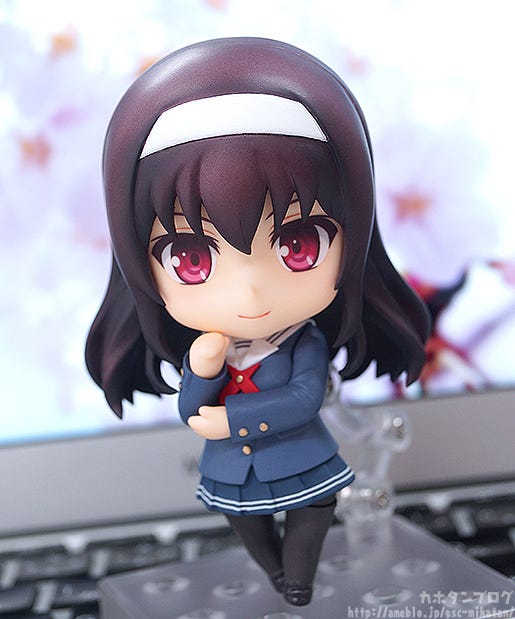 Today I’m going to be taking a look at…
Nendoroid Utaha Kasumigaoka! From the popular anime series scheduled to air from April 2017 – ‘Saekano: How to Raise a Boring Girlfriend ♭’ comes a Nendoroid of the popular light novelist Utaha Kasumigaoka wearing her school uniform! She comes with three face plates including a standard expression, a contemptuous expression as well as a fantasizing expression.

Optional parts include a laptop for her to write her novels on, an audiovisual room chair as well as an alternate lower body part to display her sitting with crossed legs. Display Utaha in various poses from her common haughty appearance to losing herself while writing her novels. Be sure to display her with the previously announced Nendoroid Megumi Katou and Nendoroid Eriri Spencer Sawamura!

The sharp-tongued student in Toyogasaki Academy’s 3C class with both beauty and brains – Utaha Kasumigaoka is joining the Nendoroid series! ♥

Her long, silky hair, white hair band and the mature aura in her eyes have all been faithfully included on the Nendoroid… not to mention that her black stockings! (´□｀｡) As she is wearing her school uniform it’s a little difficult to make out, but the Nendoroid has a very faithful rendition of her impressive curves as well!

She also comes with special  parts to recreate the folded arms pose that was rather memorable in the first season! The parts have been made with both hands visible to faithfully recreate the elegant way she folds her arms! (灬ºωº灬) Other Nendoroids with folded arm parts have always had the lower hand covered up by the arm, making this a rather unique part that really captures her original pose nicely! The arms look so much more gently folded, as if she isn’t putting too much strength into them!

But she also comes with more parts for iconic poses…! She comes with both a audiovisual room chair as well as an alternate lower body part sitting with crossed legs. ヽ(*´Д｀*)ﾉ━

These parts combined with her contemptuous face plate are the perfect combination to pose her talking back with the abusive talk she loves so much! ♡ Those cold, assertive eyes have been so nicely captured in Nendoroid size! I can just imagine Utaha’s voice in my head! The expression she has when she becomes too obsessed with her writing and loses herself in the process – a fantasizing expression!

The wide open eyes, excited blush on her cheeks and the drooling mouth! The difference between this expression and the more serious ones above show just what makes Utaha such an amazing character! The logo on the back of her laptop is also included on the Nendoroid design! ♪ Not to mention that the keyboard and touch-pad have also all been detailed for a lovely little laptop for Utaha to work on! ε=(｡・д・｡) As a side note, the final product will come with a special attachment part to ensure that Utaha can be securely posed sitting on the chair!
Be sure to add the up-and-coming novelist to your collection!
Nendoroid Utaha Kasumigaoka! She’ll be up for preorder from tomorrow! ♥

Just like the previous Nendoroids from the series we will also be preparing a bonus for purchases from the GOODSMILE ONLINE SHOP! Be sure to check the official website tomorrow for more details!

Last but not least a few related announcements!

Saekano: How to Raise a Boring Girlfriend ♭ starts airing from April 2017! You can find the latest trailer below! ♪

WonFes is coming up the weekend after next, and the afternoon stage talk event will include a Saekano: How to Raise a Boring Girlfriend ♭ event with Megumi Katou’s voice actress Kiyono Yasuno as well as Utaha Kasumigaoka’s voice actress Ai Kayano!! The talk event will also be broadcast on NicoNico, so if you are interested be sure to take a look! (Japanese only!)