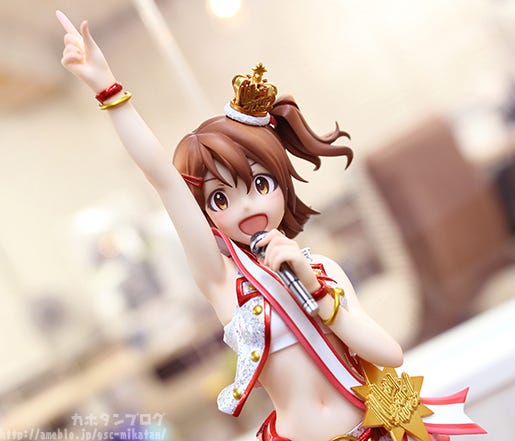 Hi everyone! Suwabe (@gsc_suwabe)  from the Corporate Planning Division here! I often have dreams of sparking to a million! From the popular idol production game ‘THE IDOLM@STER MILLION LIVE!!’ comes a figure of Million Spark! Mirai Kasuga! She is posed with a microphone in hand and her right arm pointing up to the skies in an energetic pose that conveys the tension and elation of a live concert stage!

The glittering appearance of her carefully painted outfit has been preserved on the figure to recreate the sparkling appearance you’d expect of an idol on stage! The accessories such as the crown, belt and pendant have also all been faithfully included on the figure in lovely detail! Be sure to add the impressive Mirai to your stage!

She is so SHINY!
Her expression, outfit and even the smaller accessories… they’re all so SHINY!! ★☆★
Let’s start off with a quick spin!

The figure is posed capturing the decisive moment of a live performance where Mirai shouts out to her fans!! You get to experience being in her audience whenever you like with this figure in your collection!
You’ll be able to get a nice full look at her from the official product photos once she is up for preorder, so I’m instead going to look at the finer details!
– Crown – This was definitely the first thing I noticed when I saw the figure in person! If you look close you can even see the ‘Million Spark Live!’ letters have been sculpted onto the design!

The thing that surprised me the most were the tiny little arches that make up the shape of the crown! You can even see the more hat-like part inside the golden arches, which really gives off a stylish, regal look! The little pendant that brings out her neckline!

I’m really not sure just how well you can tell from the photo, but the pendant is so elaborate… even the little red star in the middle has been faithfully included! One of my best parts about the figure is the paintwork on the outfit!

As one would expect from an idol shining on the stage, her outfit is filled with sparkly silver parts that complement the design so effectively!

The white areas are covered in little silver sequins while the red areas have no sparklies, but instead a more enamel texture. The red belt also has a slightly different texture to differentiate it from the rest of the outfit! (I’m sure this outfit is going to give the manufacturing team trouble though…!) The top and soles of the boots are so smooth and silky!

As much as I wanted to slide my fingers on the shiny redness, I’m allowed to with the prototype… so I’ll have to wait for the final product just like everyone else! The outfit also allows a nice look at her flank!
Personally my best part of the figure!! (｀･ω･´)

If you asked me what exactly I like about it I don’t think I could answer…. I just do! That’s what it means to like something!

The golden star buckle on her belt also really stands out and matches with the other golden parts of her outfit nicely! It’s always so much fun to see the figure version of an illustration – I notice so many more things!! You can’t be an idol without a microphone, and Mirai’s is included with lovely detail! You can just imagine her singing!! Plus, a Million Spark! version of Haruka Amami is also in production! Look forward to more news about her soon!! ♡