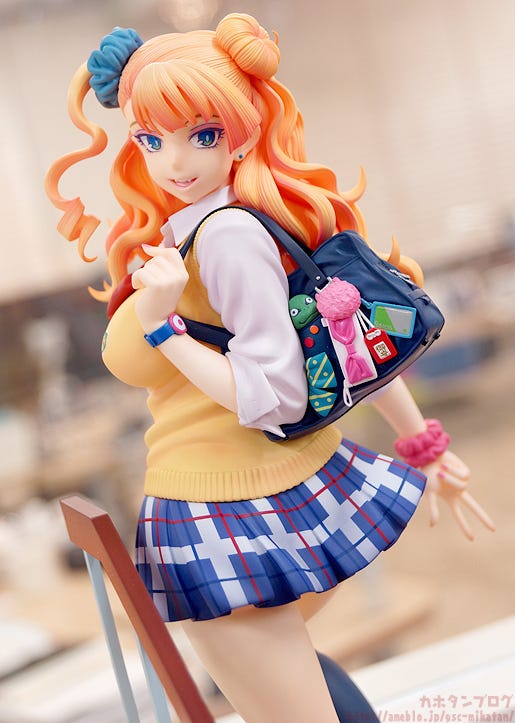 From the popular anime series ‘Please Tell Me! Galko-chan’ comes a scale figure of Galko herself! ☆

Her light and fluffy hair, elaborate eye make-up, cute moe fangs and rather large body for a high school student have all been sculpted in detail to capture all of Galko’s unique charms! (๑•̀ㅂ•́)و✧ △ The creases in her loose sleeves and slack in her vest are lovely!

But her hair really needs a special mention! Each and every stand of her loose, twirling hair has been sculpted in such detail… the unique style from the original manga has really been preserved nicely! Though I’m sure these details are going to give the manufacturing team a lot of trouble!

Let’s stop here for a second to try get a better idea of the size of this figure! She is a 1/6th scale which is bigger than you might imagine – here she is displayed next to my iPhone6s for scale! (・ω・)/ I hope that gave you a better feeling for her size!

Not only is she 1/6th scale, but the twisted pose also gives the figure a nice dynamic appearance that really makes her stand out! Plus she also comes with a special staircase base that gives the figure even more height than a normal 1/6th scale figure, and also lets you enjoy her from all sorts of different angles with ease! That impressive bosom that was brought up many times in the series!

The way her breasts lift up the vest creating those creases and the shadows they cast! The tight yet soft looking appearance is just perfect!!  (I’m sure you can get a good feeling for the size by comparing them to wooser is approximately 3cm in diameter!) Even after changing the angle one’s eyes tend to drift to her chest, but there are lots of other details to notice, so let’s take a look at a few! ♪ The ribbon is a part of her school uniform!

Those who wore one of these at school will know about the adjuster at the very top which has been faithfully sculpted on the figure! You normally wouldn’t see the fastener, but when you wear the ribbon this loose… well, let’s just say that the figure certainly has a degree of realism to it in that sense! ★ The colorful straps and charms that decorate her bag really show off the more girly side of Galko’s personality! Each of the straps are all so lovely and detailed too – you can even read the ‘Soica’ on her train pass card! (σ・∀・)σ As you might have noticed in the product description, she also comes with her red-frame glasses as optional parts for those who prefer Galko-chan in glasses mode! (●´ω｀●)

The figure really is filled with highlights, but personally the area that really catches my attention is the lovely pink shading on her knees! (੭ु ›ω‹ )੭ु⁾ The reverse side of her knees are also so nicely sculpted with such lovely bumps and shadows… they just make you want to run your fingers along!! △ Even the handrails and stairs have nice detail!

Be sure to enjoy her from all sorts of angles once she joins your collection! This would be the angle when walking up behind her on the stairs!

The fluttering of the skirt, back of her knees and those thighs… not to mention what wooser is hiding is all perfectly visible from this angle!! Be sure to add her to your collection!!
The 1/6th Scale…
Galko! She will be up for preorder from tomorrow!

Plus, orders from the GOODSMILE ONLINE SHOP will include this Original B2 Poster as a bonus!! Be sure to consider it when preordering! (⌯¤̴̶̷̀ω¤̴̶̷́)✧

Another product that is going up for preorder tomorrow is a special stand alone version of the…
Nendoroid More: Panzer IV Ausf. D (H Spec)! △ It was previously sold as a set, but now is a stand alone product!

The tank does of course allow Nendoroid Petites… Don’t forget that the Girls und Panzer Nendoroid Petites are also currently up for preorder as a rerelease! ♪ △ Total of 11 to collect… including one secret figure!

Plus! This is just the start of a new series!
The Nendoroid More: Tank Series!!

The Carro Veloce CV-33  and the T-34/85 are currently in development and there are more also planned to join them soon! Stay tuned for more info! ♡

Last but not least, the figma Vehicles: Panzer IV Ausf. H “D-Spec” is also currently up for rerelease! Orders close on the 22nd June, so don’t miss out!! △ Pre-built and features twin motors allowing it to drive it forward!