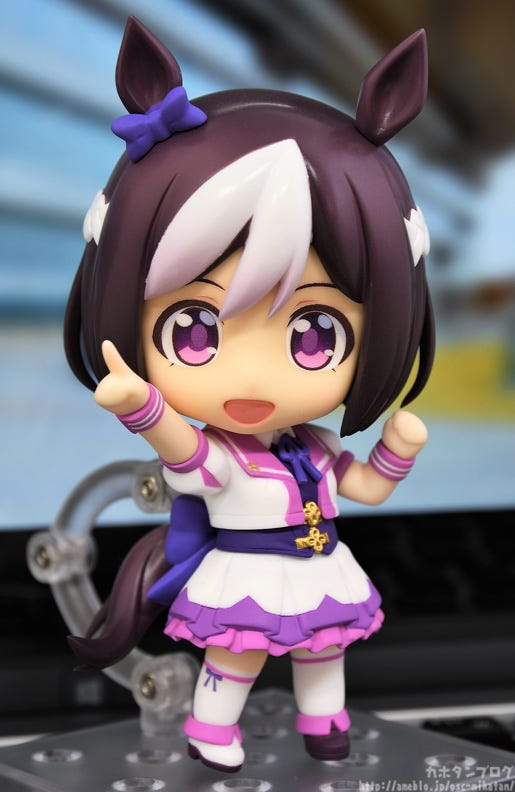 The release of the new smartphone game “Umamusume: Pretty Derby” is getting close! “I’m going to become the best horse girl in Japan!”

From the anime “Umamusume: Pretty Derby” comes a Nendoroid of the perseverant horse girl that moved from Hokkaido to Tokyo, Special Week! She comes with three face plates, including her energetic standard expression, a serious expression for when she’s sprinting in a race and a smiling expression brimming with happiness.

For optional parts she has the bookmark she received from the other members of Team Spica, a bowl of rice and a championship trophy! Additionally, an openable starting gate is included so you can recreate your favorite scenes from the show! Be sure to add her to your collection!

Finally, from the anime Umamusume: Pretty Derby comes an adorable Nendoroid of Tracen Academy student and Team Spica member, Special Week! Even in Nendoroid form, her ears and tail have been faithfully recreated! ▲The flow of her tail has been perfectly captured!

Let’s take a look at her face plates and parts!

First off is her smiling expression! Along with her smiling expression, rice and chopsticks are included as optional parts.

Be sure to make Spe-chan her favorite food when you take her home! Especially carrot hamburg steak!

Next, she also comes with the bookmark that she received from the members of  Team Spica! Even the 4-leaf clover that Mejiro McQueen found is clearly represented! ▲A great good luck charm that Suzuka-san also held onto!

“The luckiest horse girl wins.” With this you’ll have luck on your side!

Next we have her serious, competitive expression as a face plate as well as a starting gate as an optional part! Looking from the top you can see the gate clearly closes in a triangular shape, and translucent parts are utilized for the clear sections of the gate… so much detail, it looks just like the real thing!
▼It even opens and closes!▼

The enthusiasm in her face… you can almost hear the fanfare from the show:

No matter how many times I lose,

No matter how much it hurts,

From the narrow starting gate, Special Week breaks out into a full sprint! You can even see the sweat dripping down her brow. It just makes you want to get up and run too! ▲Breaking out from the pack!

Next, take a look at her shoes!

“With these horseshoes, I’ll become the best in Japan!”

The horseshoes that she received from her Mom, and Silence Suzuka helped her adjust are also included!

There’s also a joint in her tail so you can move it arund to match her pose!

Finally, a championship trophy is also included, for when Special Week finally achieves her dream! “Team Spica was the carrot that kept me going!” She’ll be available for preorder from the 13th of September (Thu)!

Preorders from the GOODSMILE ONLINE SHOP will receive a Carrot from Mom optional part as a purchase bonus!