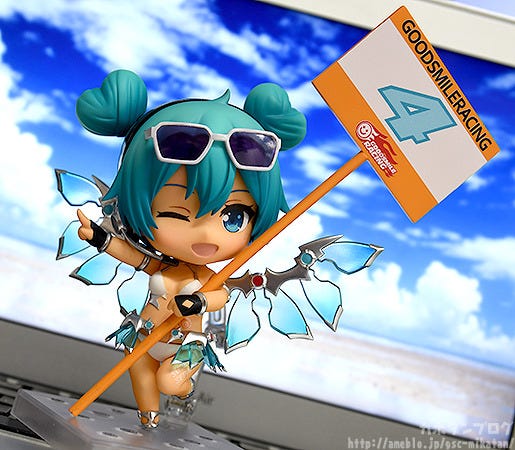 The nights have gotten so much cooler lately! It’s starting to feel like autumn! To celebrate the 10th anniversary of the Hatsune Miku GT Project’s yearly “Racing Miku” character, a new Nendoroid has arrived! The illustration used at the Sepang Circuit in 2013 by Illustrator saitom and Costume Designer Mari Shimazaki, “Racing Miku 2013 Sepang Ver.” has been transformed into an adorable Nendoroid.

The suntanned, energetic Miku comes with three face plates total, including a winking expression and a grinning expression. She also comes with a grid board fit for a race queen. Clear parts are utilized for her wings, skirt and sunglasses making for a stunningly beautiful Nendoroid.

Use the included interchangeable lower body parts for another posing option! Be sure to add this slightly different version of Racing Miku to your collection!

A Nendoroid of Racing Miku perfectly suited for the everlasting summer sun!

At first glance her bold costume will surely make your heart skip a beat! Coupled with her healthily suntanned skin, she gives off a really cute aura! Those heart-shaped hair buns are adorable too! Please enjoy all three of her adorable face plates! ◎ Since this part can directly attach to the base, even this typically difficult one-footed pose can be achieved with ease! The Good Smile Racing and Super GT Sepang logos are featured painted on her stomach, thigh and arm! (｡･ω･)ﾉﾞ

Also note how her thighs and legs are sculpted a bit more sensually as compared to the typical Nendoroid!  ♪

As you’ve probably noticed, her mechanical-looking wings are articulated, allowing for a full range of motion to match whatever pose you like! ◎ Be sure to pose her in all kinds of different ways using all of her interchangeable arm parts! ★

Be sure to add the suntanned Racing Miku to your collection! She’ll be available for preorder from the 13th of September (Thu)!

Available for preorder at the GOODSMILE ONLINE SHOP until
September 20th at 12:00JST Available for preorder at the GOODSMILE ONLINE SHOP until
October 11th at 12:00JST Available for preorder at the GOODSMILE ONLINE SHOP until
October 4th at 12:00JST