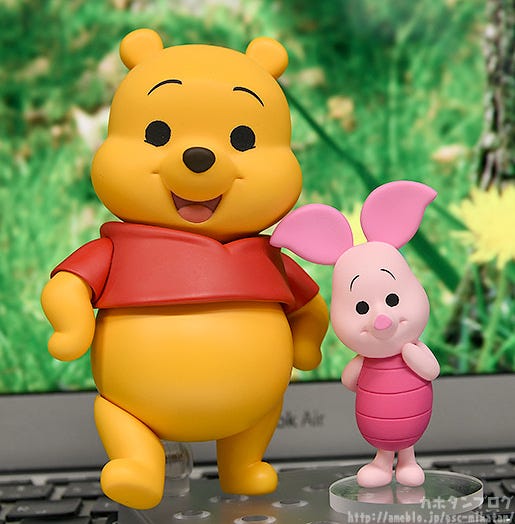 If you bake pears just like how you bake apples, they taste really delicious! Instead of cinnamon, I like mine with honey! You should try it! From the 2011 movie “Winnie-the-Pooh” comes a Nendoroid of Winnie-the-Pooh together with Piglet in a special set. The two of them have been recreated in the Nendoroid series’ signature chibi-size.

The figure features movable joints in the arms and legs, allowing for various different display options, such as posing him sitting down and eating honey or holding a balloon. An interchangeable face plate of Pooh’s puzzled expression and an optional part of Christopher Robin’s note that caused it are also included.

Additionally, a magnet placed in Pooh’s lower half allows you to stick him to magnetic surfaces, then attach the included honey ring part to recreate the famous pose of Pooh stuck in the wall! Be sure to add the adorable Pooh and Piglet to your collection!

The honey-loving Winnie-the-Pooh is joining the Nendoroids!

The chubby and lovable Winnie-the-Pooh has been brought down to adorable Nendoroid size!

His cute pink-eared friend Piglet is included too! ♪ ▲He comes with a special stand, so you can place him wherever you’d like! There are ball-joints in Pooh’s legs, so you can sit him down in this kind of pose. (*´ｪ`*)

You can pose him sitting down with his pot of “Hunny”!

In addition to his smiling expression shown above, he also comes with a puzzled expression! A note from Christopher Robin is also included! ～ヾ(o´∀｀o)ﾉ (This is the Japanese translation of the “GON OUT BIZY BACK SOON” note from the movie!)
▲The part sticking out on the right side is for attaching the note to Pooh’s hand! ◎

Enjoy the gap between his puzzled expression and his standard expression! ♪ ▲You really can pose him in all kinds of situations with this…! First is his red balloon!

You can have him hold the balloon and put him in this nostalgic pose! ◎ A honey ring is included as well! Pooh’s lower half is actually magnetic, which allows for this kind of display. (｡･ω･)ﾉﾞ If you stick him to a magnetic surface and attach the included honey ring, you can recreate the famous scene of Pooh stuck in the wall. ★

Be sure to try it out when you take him home! ♪

Be sure to add these cute residents of the Hundred Acre Wood to your collection!

Available for preorder from the 13th of September (Thu)!