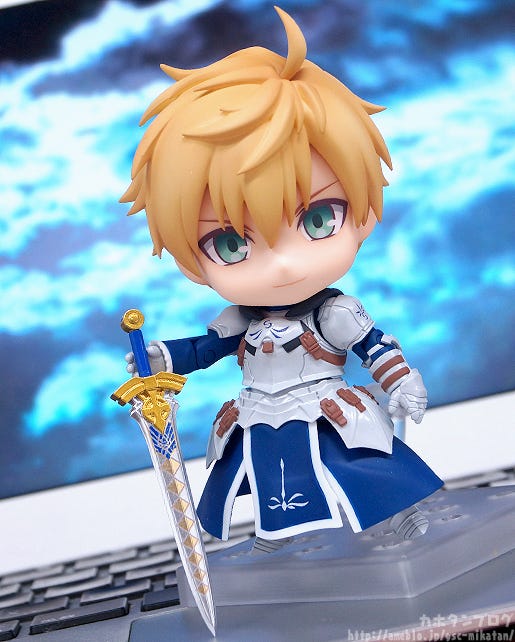 Tomorrow is the Animate Girls Festival! You can expect quite a lot of new info to come through at the event!! I hope everyone is looking forward to it! From the popular smartphone game “Fate/Grand Order” comes a Nendoroid of the Saber class servant, Arthur Pendragon (Prototype)! He comes with three face plates including a handsome standard expression, a heroic shouting expression as well as a slightly more bashful blushing expression.

His sword Excalibur with all of its beautiful details is included for him to wield, allowing for various different poses from the game! Enjoy your very own knight in shining armor shrunk down to adorable Nendoroid size!

From Fate/Grand Order comes a Nendoroid of the knight in shining armor, Saber/Arthur Pendragon (Prototype)! The details of his armor have been so amazingly detailed even in tiny Nendoroid size!! ★ The laced part of his armor on his right hand, the iconic hood, the long cuffs of his outfit and even the shoulder armor have all captured so nicely! Different parts of the armor mix and match between a glossy and matte finish to differentiate the different textures of the armor as well! ▲ The flow of his hair also looks great! He also comes with special parts that allow you to pose him with his sword held upward with both hands to recreate the scene from the game! ▲ I can just imagine his intrepid voice!

Plus he also comes with this third face plate…

The expression is based on expressions that are seen in the game, but when they are converted into Nendoroid proportions the face looks even cuter than ever before!!

According to the figure’s planner, the above pose has been tuned to match nicely with this pose from Nendoroid Saber/Altria Pendragon! Another detail that I really enjoyed was the nuance of his fingers for the open hand part! They aren’t completely open but instead have a slightly bent look that match with this embarrassed expression very nicely! I’m sure it can be used for various other poses as well! ▲The ever so slight blush and almost waving hand… so cute!

Arthur Pendragon is best known for his knightly appearance and combat scenes, but it is lovely to have a more gentle, cute looking pose like this one to choose from! (｡･ω･)ﾉﾞ

Be sure to add the little knight to your collection!

He’ll be up for preorder from the 7th November!

However… that is not all! We also have an alternate version with some bonus parts! From the popular smartphone game “Fate/Grand Order” comes a Nendoroid of the Saber class servant, Arthur Pendragon (Prototype)! This special “Ascension”” version includes all the parts that are included with the standard version together with bonus parts for even more display options!

He comes with three face plates including a handsome standard expression, a heroic shouting expression as well as a bashful blushing expression. His sword Excalibur with all of its beautiful details is included for him to wield, allowing for various different poses from the game!

The “Ascension” version also includes parts to recreate Invisible Air and his powered up version during his Noble Phantasm. He also comes with hood parts that allow you to pose him in his pre-ascension form as well as a cape to convert him into his third stage of ascension! Enjoy your very own knight in shining armor shrunk down to adorable Nendoroid size!

As you can see from the photos above, this version comes with hood parts as well as an “Invisible Air” sword! (●‘∀‘●)ﾉ”

In addition, the cape that is seen on his third ascension is also included, along with both a sword and effect sheet to pose him making use of his Noble Phantasm! This is the same pose as above but with the cape, powered-up sword and effect sheet! The pose suddenly looks a lot more powerful!!

In other words, this alternate version will cost a little extra, but will come with everything that is included with Nendoroid Saber/Arthur Pendragon (Prototype) as well as the following bonus parts!

All the expression parts and other parts included with the standard version are also of course included! ε-(o´ω｀o) ▲ The hood can be used to create all sorts of stories! Also available for preorder on the 7th November!!

Preorders for many products at the GOODSMILE ONLINE SHOP are closing soon! Here are the products closing on the 9th November (JST)!