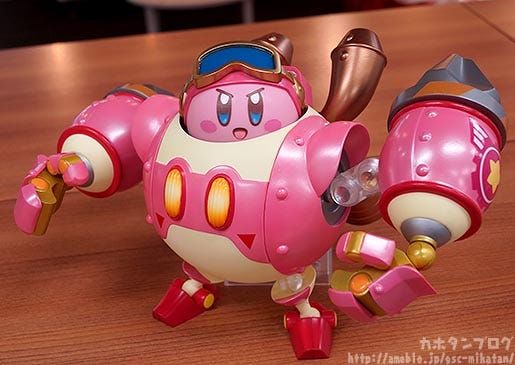 In addition, a special Planet Robobot version of Nendoroid Kirby that features an all new face plate to recreate the box art of the series is included with the armor, and a helmet part for Nendoroid Kirby is also included! Add this Robobot Armor to your collection and bring out the atmosphere of Dream Land more than ever before!

Kirby is back, and this time with his robot armor!

The Robobot armor that featured in the Kirby game “Kirby: Planet Robobot” is joining the Nendoroid More series in order to give Kirby even more playability than before!

The shiny metallic pink appearance together with the creamy white areas that gleam in the light… the mechanical appearance of the design has been captured with a sharp sculpt that also keeps that cute Kirby-like appearance as faithfully as possible! ▲ The shape of the Robobot armor is so cute!

In addition, as you would expect from the Nendoroid More: Robobot Armor & Kirby product name, A Nendoroid Kirby is also included with the armor He comes with a special face plate that allows you to recreate the cover art of the game – with sharp eyes and an open mouth smile! (´□｀｡)

※ Only this single face plate is included with this Kirby!

As a side note, other than the facial expression the main body itself is identical to the previously released Nendoroid Kirby! The body has a rubber paint coating making him feel all round and smooth and the arms and legs are all attached with magnets that can be moved around freely for all sorts of poses! ♥ As a side note, the helmet that magically appears when Kirby rides in the armor is also included, but it is a separate part that can be removed if you would rather have the standard Kirby on display!

Anyway, let’s take a closer look at the Robobot Armor itself!! ▲ The cockpit has also been nicely detailed! ♪

While in the game the arms and legs of the Robobot armor are “floating” around the main body, this has been captured on the figure with use of large transparent joints! (っ’ω’)っ)) While still capturing the appearance from the game faithfully, this also allows the arms and legs to be moved around in all sorts of different ways for awesome poses! If you move the joints around a little… You can even pose it in the idle mode before Kirby jumps into the driver’s seat! This was one of the many highlights that the product’s planner is very proud of! ε-(o´ω｀o)

When you place Kirby into the cockpit you can remove his hand parts entirely to have him fit in just right, but you can even attach the hands while he is riding for even more different nuances while posing!☆ ▲ Throwing his hands outside the cockpit!

Here is a size comparison with an iPhone6s! ▲You can even use it as a smartphone stand! You could even hold two!

All sorts of different poses with Kirby and his Robobot armor! Up for preorder from tomorrow! ☆

Plus, we also have another option!
Nendoroid More: Robobot Armor The armor will also be sold by itself without Kirby, allowing those who already own Nendoroid Kirby to enjoy the armor without needing to get another Kirby! (Not that having two Nendoroid Kirbys is ever a bad idea!)

In addition, the helmet is also included with this version! *Note that no face plate is included with this version.

Simply select the version that suits you! ♪