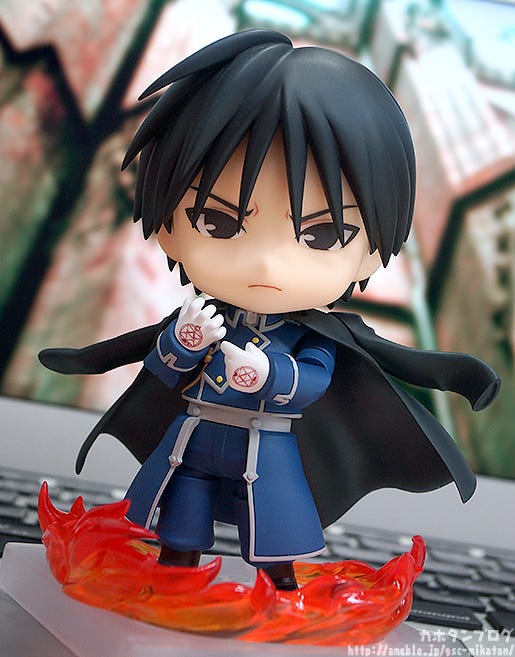 Recently whenever it rains I forget my umbrella and end up buying a cheap vinyl umbrella! I really need to start paying more attention to the weather forecasts! (˚ ˃̣̣̥ω˂̣̣̥ )

Anyway, today I’m going to be taking a look at…
Nendoroid Roy Mustang!! From the popular “FULLMETAL ALCHEMIST” series comes a Nendoroid of the “Flame Alchemist” Roy Mustang! He comes with three face plates including a standard face with a fearless smile, a serious expression with sharp eyes as well as a more playful smiling face for when he belittles Edward. His arms are articulated allowing for various different poses, and even in Nendoroid size the transmutation circles on his gloves have been carefully detailed.

Flame effect parts to capture his classic finger snap pose are of course included, as well as a line of fire which can be placed on the ground in front of him. The black coat he wears on his shoulders is also included allowing for even more magnificent poses! Be sure to display him together with the previously announced Nendoroid Edward Elric and Nendoroid Alphonse Elric!

“I am the Flame Alchemist. You’d best not forget it.”

The ambitious State Alchemist that can be quite the womanizer but also cares deeply for his comrades, the Flame Alchemist Roy Mustang is joining the Nendoroids! The casual-looking straight hair and confident smile have been captured perfectly for fans to enjoy the colonel in their collections!

This is the 3rd Nendoroid from FULLMETAL ALCHEMIST so far! But lets get back to today’s main feature! The blue uniform of the Amestris army has been shrunk down to Nendoroid size with lovely attention to detail! You can even see there is a tiny transmutation circle on his glove!

Of course he also comes with flame alchemy effect parts to display him in his signature finger snapping pose! ▲ The flames are sculpted to curl around his arm! (｡･ω･)ﾉﾞ The jacket on his shoulders can also be removed like so! ♪ Simply match the parts with whatever situation you are trying to create! ♡

In addition, he also comes with a fiery circle flame effect part which can be placed at his feet to bring out his element even more! (∩・∀・)∩ The second face plate included is this serious expression which is ideal for posing him in more serious combat scenes!

The confident smile and this composed expression capture two very different sides of his personality so nicely! He can also be posed saluting, like so… Even though the face plate is the same as above, the situation makes the expression look even more formal!

The furrowed brow captures his compressed emotions so perfectly! Anyway, let’s move onto his third face plate which has a much more playful feel to it… a condescending smile! Here he is displayed with Nendoroid Edward Elric to even better capture the scene! ♪ ▲ I can just imagine their heated arguments!

Ne sure to add the cute Flame Alchemist to your collection!
Nendoroid Roy Mustang!!

In addition, orders from the GOODSMILE ONLINE SHOP will also include a Lighter + Bare Hand Parts with Transmutation Circle as a bonus! ▲ It’s so tiny and yet still nicely detailed!

This can be used to recreate some of the more memorable scenes from the series, as well as for various original poses!