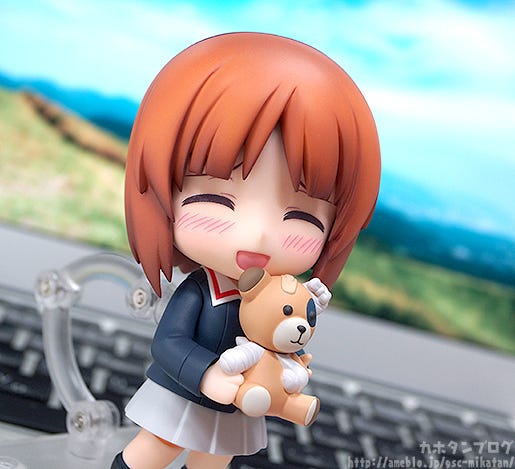 The shops have already started to sell Halloween candy! I always love the color themes associated with Halloween! From the anime movie series “GIRLS und PANZER das Finale” comes a Nendoroid of the Ankou Team’s captain, Miho Nishizumi wearing her panzer jacket! She comes with both a gentle smiling face plate as well as an blushing face plate for an embarrassed appearance, and her hair features a completely new sculpt!

Optional parts include Miho’s headset, her beloved “Beaten Up Boko” teddy bear as well as an alternate upper body part to display her wearing the Oarai Girls High School peacoat. Be sure to display her with the other previously released Ankou team Nendoroids and Panzer Vor!!

The very first movie in a series of movies titled “GIRLS und PANZER das Finale” will be showing in theatres in Japan from the 9th December 2017! The main character of the series, Miho Nishizumi has been transformed into an all new Nendoroid for fans to enjoy in their collection! (●‘∀‘●)ﾉ”

If we look close you can see the detail put into the headset, and even the pockets of her jacket! ♪ On the back of her jacket is the Ankou team’s logo! ▲ The shape of her hairstyle has also been captured nicely!

This time around her beloved teddy bear “Beaten Up Boko” is also included! ♥ ▲ The bandages are so very intricate! ▲ The head is attached with a ball joint to change the direction he is facing! ♪

Miho comes with a special set of arms that can be used to hold Boko, as well as a cute expression with rosy cheeks to show just how much she loves him!! Finally, as you may have guessed based on the product name… She also comes with the Oarai Girls High School peacoat as an alternate body! ▲ Displayed with the leg parts from Nendoroid Miho Nishizumi!

With this release, all the members of the Ankou team are available in their Panzer jackets! ヽ(*´∀｀)ノ You can find out more information about the previously released characters over here! ☆

Here they are all displayed in inside-tank mode! (σ・∀・)σ * Miho is sitting on the bonus chair included with Nendoroid Akiyama

purchases from the GOODSMILE ONLINE SHOP! She’ll be up for preorder from the 14th September!

On a related Girls und Panzer note, the Nendoroid Petite: GIRLS und PANZER 02 series will be shipping out from the 19th September 2017! ★