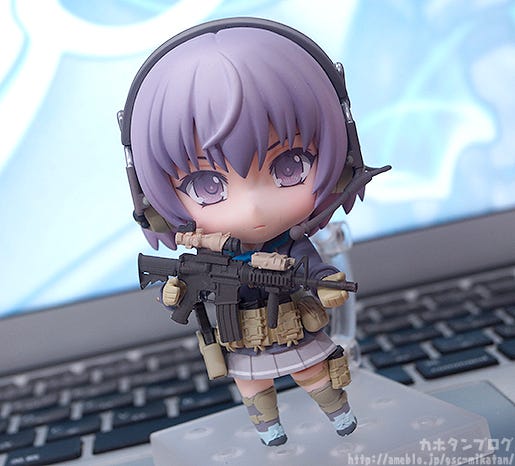 It’s starting to get a little cooler now! We have moved into the season of oden and chilled Chinese noodles! Anyway, today I’m going to be taking a look at an item currently up for preorder… From TOMYTEC’s popular 1/12th scale series of miniature guns, “Little Armory” comes a Nendoroid of one of the series characters – Asato Miyo! She comes with three face plates including a composed expression based on the box art of the original kit, a combat expression perfect for battle scenes as well as a crying face to show the cuter side of her personality.

Nendoroid-sized preassembled versions of the Carbine Rifle and Handgun Little Armory weapons are also included for her to wield. The handgun can also be holstered in the holster on her hips, and effect parts to display her firing the guns are also included to create heated shoot-out scenes!

The packaging for the figure will also include a background sheet with chibi-sized target dummies, which can be cut out and used together with the included effect parts to pose Asato training at the range!

From the Little Armory series comes a Nendoroid of one of the tactical high school girls from the series: Asato Miyo! The cute purple color scheme of her design and the impressive details of her equipment look great even in Nendoroid size! ♪ So much detail on such a small figure!

It’s always so amazing to see such intricate design on a chibi-sized figure! Be sure to take a nice close look if you decide to pick her up! ♪

And I’m not just talking about the gun – also note the pleats of her skirt, the gold buttons on the blazer and her lovely bob-cut hairstyle! ▲The few hairs sticking up at the back are so cute!

For those who are unaware, the Little Armory series is a set of 1/12th scale plastic model kits of various weapons that can be put together and displayed with figures! You can find a listing of the various products in the series here! But let’s get back to the Nendoroid! ヽ(*´∀｀)ノ

Along with the composed face plate above… She also comes with a combat expression!

The sharp eyes and shouting mouth make her suddenly look much more imposing and ready for combat! In the photo above you can also see the muzzle flash and impact effect parts that are included to pose her shooting! (っ’ω’)っ))

The chibi target dummies are included as a print out that is a part of the box packaging! They can be cut out and folded just like above in order to pose Miyo testing her shooting skills at the shooting range! ★ Last but not least, she also comes with a crying face plate! The contrast between the first two expressions and this one is amazing! Definitely the ideal face plate for some cuter scenes!

If you use this face plate together with the practise dummies it makes for a completely different scene compared to when she had the combat face! ★ The figure allows for all sorts of fun and interesting situations! Be sure to find your favorite pose and enjoy the tactical high school girl by your side! (｡･ω･)ﾉﾞ

TOMYTEC has also made some videos to show off the Nendoroid, so be sure to take a look! ★