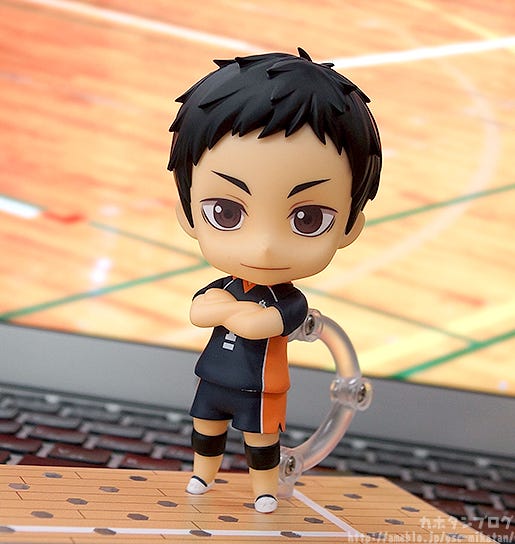 I recently have an uncontrollable urge to eat ramen! I’m generally more of a tonkotsu ramen person, but sometimes I’ll go for the more lightly flavored shoyu ramen.

Anyway, today I’m going to be taking a look at…
Nendoroid Daichi Sawamura! ★ From the popular volleyball manga series with an equally popular anime, ‘Haikyu!!’, comes a Nendoroid of the Karasuno High School Volleyball Club’s captain and reliable receiver – Daichi Sawamura! He comes with three face plates including a standard expression, a serious expression for when he is in a match as well as the malicious smile he had when he shook hands with Nekoma High’s volleyball team’s captain Kuroo.

The Nendoroid allows you to recreate a number of memorable scenes from the series and also comes with a volleyball as well as a special base made in the image of a volleyball court. He also comes with the Karasuno High School Volleyball Club Support Flag that reads “Jump!”. Be sure to display him with the previously released characters in the series and enjoy all sorts of different situations in Nendoroid size!

“We’ll never win if we don’t believe we can.”

The reliable captain of the Karasuno High School Volleyball Club who always keeps the teams spirits up, Daichi Sawamura is joining the adorable Nendoroid series! He is in fact the 13th Nendoroid to be released!! But let’s get back to Daichi-san!

Like most of the Nendoroids in the series so far he is sculpted wearing his volleyball uniform, but as he is the captain he also comes with his sports jersey with the school symbol to hang on his shoulders! (∩・∀・)∩ ▲ The two guardians of the Karasuno High School Volleyball Club

Note that all the previously released team captains have also comes with the jersey over their shoulders: Nendoroid Toru Oikawa, Nendoroid Tetsuro Kuroo and Nendoroid Kotaro Bokuto! ▲ The sleeves blowing behind him are perfect!

Moving on, let’s take a look at his face plates!

Along with the gallant smile above he comes with two other options! The first of which is a serious expression which is perfect for displaying him during a match! ε- (´ー`*) Carefully eyeing the ball to ensure he hits it just right! He does look like he is enjoying himself though! Plus as you may have noticed he comes with a squatting lower body which allows you to display him receiving the ball with all his strength!

If we take a look from behind… You can get a little peek at his back!

The figure stands just 10cm in height but the soft appearance of uniform as it moves around to reveal his back has been faithfully included!

The confident expression together with his crossed-arm pose also makes for a very nice display! ▲Somehow he seems cuter when you look down from a higher angle!

You’ll also notice that as usual he comes with a special rectangular  volleyball court case as well as a volleyball for in-match scenes, but that’s not all! A lovely addition by the figure’s planner, Moe-P!

The flag ready to cheer his team to victory has been beautifully sculpted to give it that cloth-like appearance! The kanji reads “Tobe” which can mean both “Jump” and “Fly” – jump high and fly to victory! ヽ(ﾟ◇ﾟ )ﾉ

But anyway, let’s move on to this third and final face plate! This is perfect to recreate the hand-shaking scene with Kuroo!  They may look like they are smiling but you can feel the tension between the captains… just look at the tense mark on his hand!

But at the same time if you pose him with this expression and his own team mates it can easily be taken as just a normal smiling face! Recreate your favorite scenes and even create your own situations in Nendoroid size!

Be sure to add the reliable spiker to your collection!
Nendoroid Daichi Sawamura! He will be up for preorder from tomorrow!

Be sure to keep your eyes on the Good Smile Company website for details!

In addition, orders from the GOODSMILE ONLINE SHOP will include this Nendoroid Plus Rubber Strap: Daichi Sawamura Reliable Captain Ver. as a bonus! ヽ(●´Д｀●)ﾉ Also don’t forget these Nendoroids that were announced in Weekly Shounen Jump! They will be coming to join the collection soon!! ε=(｡・д・｡)