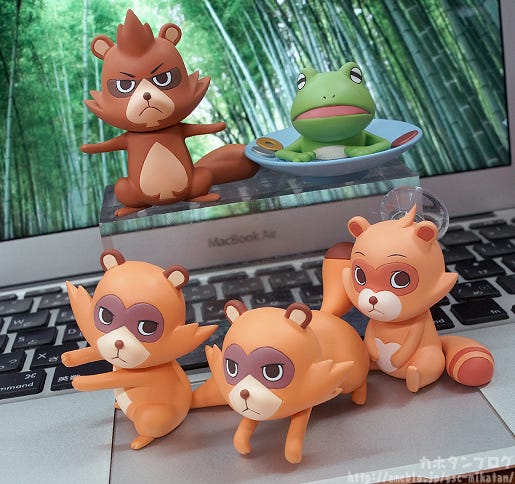 I used to work part-time at the hotel used in fhána’s “Moon River” music video. It was my very first part-time job as a student so it really brings back memories! From the anime series The Eccentric Family 2 comes a set of the mascots of the Shimogamo brothers that will also help out around your desk!! The set includes 5 different items including a Yaichiro paperclip holder, a Yajiro item tray, a Yasaburo pen stand, a Yasaburo hanging mascot as well as a Yashiro smartphone stand. Collect them all and show off the eccentric family on your desk!

* This product is sold as a capsule toy only.
* This product will be available prior to release at the Kyoto International Manga Anime Fair 2017 taking place from the 16th to the 17th September.

“An interesting thing is a good thing!”

The cute animal brothers have been converted into cute miniature figures that can also help out around your desk! Other than the previously revealed Yasaburo pen stand, today’s blog will be the first look at their final prototypes!

Let’s first see how they look from the back! Their fluffy, round forms have been captured perfectly!

They are all around palm-size but even so are quite large for miniature figures! ▲ They are more than cute enough to just display as figures!

The size does differ between characters slightly, but they are definitely on the larger size for capsule toys! ▲ Yajiro is in some water surrounded by coins! ♪ ▲A serious yet still adorable expression! * All figures come with the round base you can see Yaichiro standing on. ▲ I love the puffy look of his froggy hands! ☆ ▲ You can also enjoy him prancing forward! ♡ ▲ The upward glance is so adorable! As you can see, the figures are not only cute to have on display but also serve various different purposes! ヽ(*´∀｀)ノ Be sure to add the cute little balls of fur to your collection!

Palm-sized figures of the Shimogamo brothers!

They will first be available at the Kyoto International Manga Anime Fair 2017 in September 2017!

The product page will be opened on the 25th May with more information, so keep your eyes on the Good Smile Company website! ♪