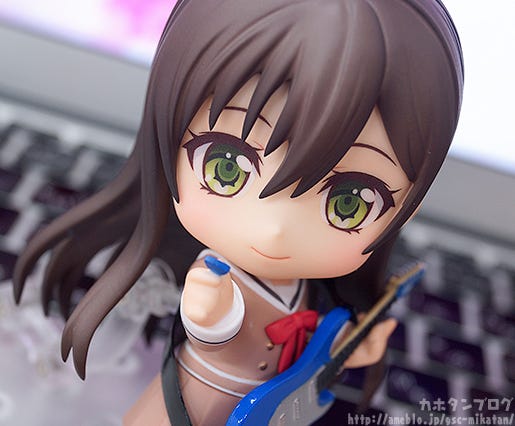 Anyway, today I’m going to be taking a look at…
Nendoroid Tae Hanazono! From the anime series BanG Dream! comes a Nendoroid of Poppin’Party’s lead guitarist, Tae Hanazono! She comes with three face plates including a standard expression, an expression focused on her performance as well as a surprised expression

“If you enjoy it that’s what counts. If you want to play the guitar then you will.”

The first-year A-class student at Hanasakigawa Girls’ High School and lead guitarist of Poppin’Party, Tae Hanazono is joining the Nendoroids! She is the fourth member from the group to join the series! (∩・∀・)∩ Anyway, let’s get back to Tae! ♪

Her second face plate is this cute expression with her mouth open, making her look like she is carefully concentrating on her performance! (*´ｪ`*) Tae started learning to play the guitar from primary school which allowed her to become quite proficient from a young age!

Along with the blue guitar, she also has a tiny blue pick! ♪ The guitar itself has also been shrunk down to Nendoroid size but still retains its unique shape and details! ☆ The face plate above can also be used without the guitar for some rather cute original poses! ▲ It gives her a rather composed appearance! ☆

She also comes with her guitar case to carry on her back! This let’s you pose her walking to and from practice… You can also recreate the scene where she saw Kasumi’s “Random Star” guitar! ヽ(●´Д｀●)ﾉ This is her third face plate, which is a…
Surprised Expression! ★ The open mouth and wide eyes are so cute! ♥

Tae is known to have a more mature personality, but she does sometimes have these more childish expressions! Be sure to add the adorable Tae to your collection!
Nendoroid Tae Hanazono! She will be up for preorder from the 25th May! ♪

Keep your eyes on the Good Smile Company Site for more details! Purchases of this product from the GOODSMILE ONLINE SHOP will also include a Special Background Sheet for Nendoroids (Hanasakigawa Girls’ High Culture Festival Stage)! ♪ This allows you to recreate the culture festival performance scene in Nendoroid size! Be sure to consider it when preordering!! (●‘∀‘●)ﾉ”