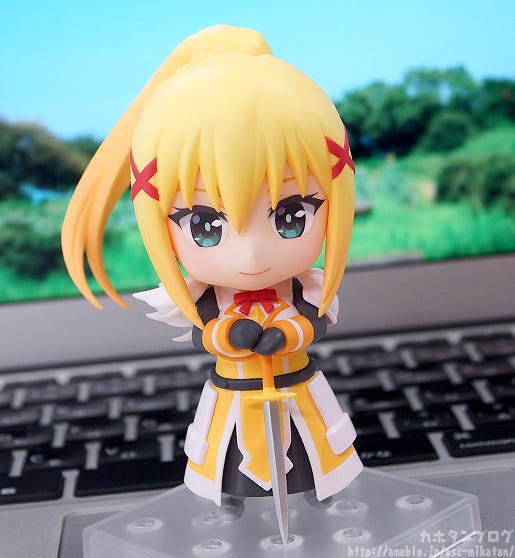 We’re in the season of spring cabbage! I’ve always enjoyed frying them together with sakura shrimp for the perfect spring meal! *nom* (●´ㅂ`●) *nom*

Anyway, today I’m going to be taking a look at…
Nendoroid Darkness! From the anime series ‘Kono Subarashii Sekai ni Syukufuku wo! 2’ comes a Nendoroid of the blue-eyed, blond-haired masochistic knight – ‘Darkness’! She comes with three face plates including a composed smiling expression, a euphoric expression with a slight blush on her cheeks as well as a worried, blushing expression that makes you wonder what she is anticipating!

Optional parts include her sword as well as articulated arm parts that allow for all sorts of different poses. In addition, two flying cabbage monsters as well as an alternate upper body part with her clothes damaged is also included. Be sure to display her with the previously announced Nendoroid Aqua and Nendoroid Megumin!

A Nendoroid of the masochistic Crusader!

From the series KONO SUBARASHII SEKAI NI SYUKUFUKU WO! 2 comes an adorable little Nendoroid of the female knight that tends to be too clumsy to land a good attack, but always makes a good shield – Darkness! (∩・∀・)∩ Her characteristic blond hair also has a slight orange gradient toward the end of the ponytail! Returning to our main feature, Nendoroid Darkness comes with two static arms that you can see in the photos above, and in addition comes with special articulated arms which have a joint in the elbow allowing for more dynamic poses! This allows for more action poses with her sword!! ヽ(●´Д｀●)ﾉ

Plus along with the lovely smiling expression above, she also comes with two alternate face plates! ★

The first is this euphoric expression!! Plus as you may have noticed she even comes with an alternate upper body part that has her armor broken and outfit slashed up – allowing you to pose her enjoying taking the damage for everyone else! (´□｀｡)

Two flying cabbage monsters are also included with their own little stands allowing for even more situations in Nendoroid size!! ♥ Onto her third face plate… However, anyone that knows the masochistic Darkness will know that even if she is faced with a rather horrible fate… she is probably quite looking forward to it – and that shows on her face! (´ー`*)

The pose that emphasizes her bust is also welcome! ▲ Even in Nendoroid size her boobies are rather impressive! (/ω＼)

The expression also works nicely with the cabbage monsters! ♪ ▲ If you balance it carefully she can even hold one!

Be sure to add the cute crusader to your collection!
Nendoroid Darkness! In addition, preorders from the GOODSMILE ONLINE SHOP will also include a Special Round Base as a bonus! Last but not least… we have heard your requests and figured it was the perfect time to rerelease another member of the cast! ☆ She will be available for preorder at the same time as Nendoroid Darkness!