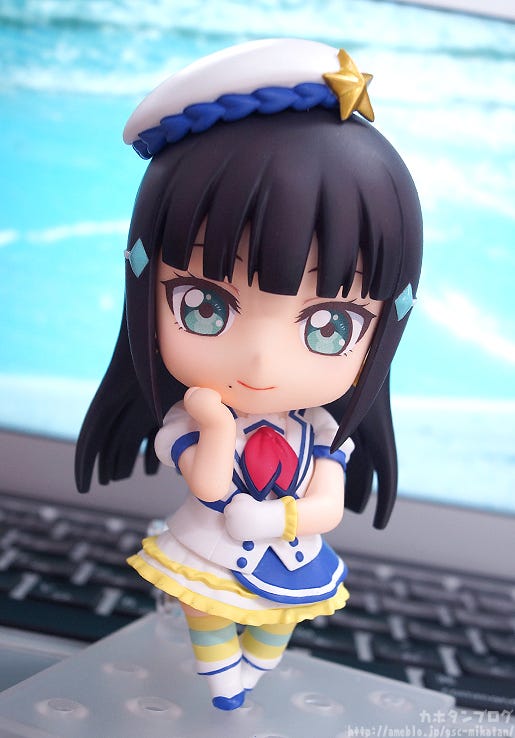 This season always brings lots of green tea-flavoured deserts and snacks which make my days so much happier!! (*´﹃｀*)

Anyway, today I’m going to be taking a look at…
Nendoroid Dia Kurosawa! From the anime series ‘LoveLive!Sunshine!!’ comes a Nendoroid of the Aqours member Dia Kurosawa wearing her outfit from the song ‘Aozora Jumping Heart’! She comes with both an elegant smiling face plate as well as an upset, blushing face plate for when she gets annoyed with the other Aqours members! A folding fan is also included which can be held over her mouth to add a different feel to each of the expressions!!

Looking from the back you can see the attention put into the smaller details such as her earrings and the frills on her dress!!  You can also enjoy her lovely long and silky hair as it flows behind her!! ヽ(ﾟ∀ﾟヽ 三 ﾉﾟ∀ﾟ)ﾉ ▲ Even the hat is subtly detailed!

This also means that we have finally moved into the third year members of Aqours! You can see all the previous releases below! ヽ(●´Д｀●)ﾉ ▲ Released in February 2017
– Nendoroid You Watanabe – But let’s get back to Dia!☆ She comes with a selection of different arm parts including these bent arms which allow you to recreate various poses from the opening theme of the anime series! =(｡・д・｡) Plus she also comes with this alternate face plate! Just looking at it makes me imagine her upset voice shouting at the other Aquors members! It will be so fun to display them together with this!

Even if we make the exact same pose as the first photo on today’s blog but switch out the face plate, the feeling behind the pose changes completely! ▲ The slight blush on her cheeks makes it perfect!! So cute!!

In addition she also comes with a folding fan as an optional part, which you can use to cover up her mouth for even more display options! ☆ ▲ This could be used for all sorts of poses!ヽ(*´∀｀)ノ

You need to imagine who is on the other end of that gaze… depending on who it is there are all sorts of different possibilities for this pose! ♪ Simply display her however you think she looks best

Be sure to add the student council president filled with pride to your collection!
Nendoroid Dia Kurosawa!

She’ll be up for preorder from the 13th April!★