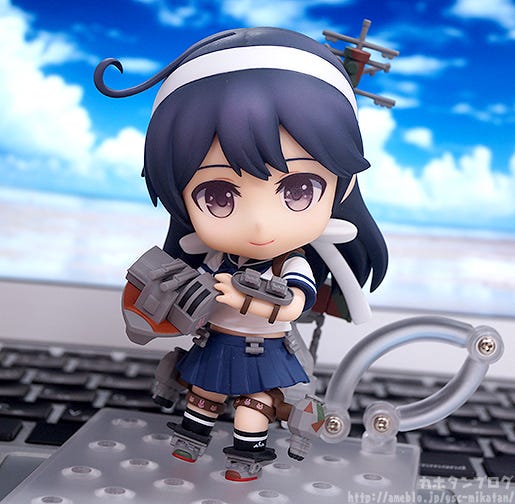 Today I’m going to be taking a look at…
Nendoroid Ushio Kai-II! From the popular browser game ‘Kantai Collection -KanColle-‘ comes a Nendoroid of the 10th Ayanami-class destroyer in her upgraded form – Ushio Kai-II! She comes with three face plates including a standard expression as well as an uneasy expression and a crying expression that both match up with her apprehensive personality.

Her ship parts, camouflage patterns, turrets and even the little animal print on the belts around her legs have all been faithfully captured in Nendoroid size! She also comes with effect parts to display her firing her turrets and torpedoes allowing you to pose her in battle scenes! A bag filled with roasted sweet potato is also included to bring out the feeling from her limited Autumn illustration in the game! Be sure to add Nendoroid Ushio Kai-II to your collection and give her the confidence she needs to succeed!

The 10th Ayanami-class destroyer in her upgraded form is joining the Nendoroids! Her cute sailor uniform, headband, twirl in her hair, gentle eyes and of course her ship parts have all been faithfully converted into Nendoroid size! ▲ The little ship parts around the edges of her skirt are also included!

TThis is how she looks from the back! ♪ The camouflage patterns on her ship parts as well as the belts around her legs have all been preserved in Nendoroid size! She is a little work of art!

Along with all these details and ship parts she also comes with two lovely alternate face plates! (｡･ω･)ﾉﾞ

The first of which is this uneasy expression! The expression really brings out her personality nicely, and those sunken eyebrows make me wish I could jump to her side and protect her!

If you combine this expression with the turret and torpedo firing effect parts you can pose her in battle against her enemy with a bit of a worried look on her face! ヽ(ﾟ∀ﾟヽ 三 ﾉﾟ∀ﾟ)ﾉ ▲ From this angle you can see the little bunny mark on her turret!

Plus as I’m sure you’ve noticed the barrels on the hand-hold turret can be moved around to better match your poses! Maybe not quite crying… but she really looks like she is about to burst into tears!!! It’s just too adorable!!

In the pose above she is also crossing her arms over her chest similar to the way she looks in her half-damaged illustration, which is actually where this expression originally comes from!! Somehow it makes me feel like I’m doing something to her that I shouldn’t be doing…

If you move the arms out of the way not only do you get to see her chest a little better and you’ll also notice that there is a nice gap between her top and her skirt for a little peek at her belly button! ▲ Even as a Nendoroid she has rather impressive curves!

The figure is so much fun to look around from all sorts of different angles! Even if she is looking at me about to burst into tears which I do feel a little bad about!!

Plus as always with the KanColle Nendoroids she also comes with food parts! This time around its a bag of roasted sweet potatoes! ♥ Partially recreate the Autumn limited graphic from the game!! (∩・∀・)∩

You can also combine it with the crying expression…! ▲ This expression is ready to tell so many different stories!

Be sure to add the 10th Ayanami-class destroyer to your collection!
Nendoroid Ushio Kai-II!

She’ll be up for preorder from the 14th March!

Plus as usual, purchases from the GOODSMILE ONLINE SHOP will include a ‘Nendoroid Ushio Kai-II Special Box Sleeve & Special Nendoroid Base as a bonus!