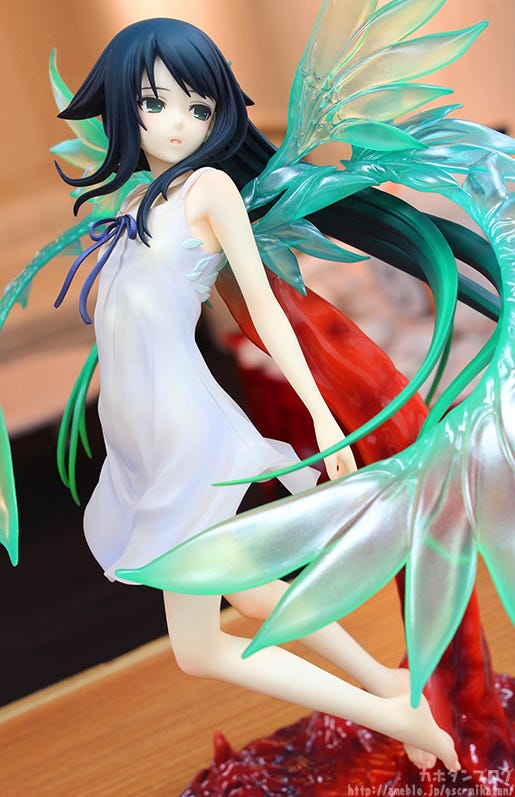 “That… is love that will defile the world.”

From ‘Saya no Uta’ the suspense horror visual novel released by Nitroplus in 2003 comes a scale figure of Saya, 14 years after the release of the game! The figure captures Saya’s slender build and makes use of a gentle gradient for her hair and translucent parts for her wings to create a touching, beautiful appearance.

On the other hand, the base she is held up by has an unsightly, fleshy appearance that brings out the unique atmosphere of the game while also creating a contrast to the figure that brings out her beauty even further. The careful balance between the beautiful Saya and the grotesque base is sure to stand out in any collection. The wistful, transparent expression on her face brings out a somewhat cold feeling to the figure, but that feeling just makes her all the more eye-catching!

Hmm? You say you see a figure of a cute, young girl in these photos? Oh my… it seems you are quite badly affected…

From Nitroplus’ suspense horror visual novel ‘Saya no Uta’ comes a figure of Saya herself, around 14 years after the release of the game!!! (I can’t even imagine how young I was 14 years ago!) The figure makes use of a lot of translucent areas such as on the wings and the one-piece dress which create a pure and innocent appearance that really makes the figure stand out in a beautiful way!

But perhaps the thing that stands out most about the figure is the contrast between the light, gentle appearance of Saya and the grotesque appearance of the base she is displayed upon… Saya’s pale, dainty feet and the fleshy red base that holds her up! When I asked WING what their main points of focus on the figure were, the first answer was of course the contrast that can be seen so very clearly when you glance at the figure!

Those who haven’t played the game may not quite understand, but the grotesque appearance of the base and the contrast it has with the cute Saya is what captures the essence of the game within the figure! ▲ Like a single dandelion flowering in a barren wasteland…

As a side note, the photo above is so close and yet so far… just a little more and you might have been able to see them! You’ll have to wait till she joins your collection for that!

Anyway, enough about the base and onto Saya herself! Just look at that empty expression…

Just looking at her makes we want to promise her I can stay by her side! I want to hug her and tell her everything will be alright! The see-through look just can’t really be explained in words, but it simply looks so stunning. The way you can make-out the shape of Saya’s body through the material of her dress – each and everyone of the curves and bumps of her body are just calling to be caressed!

And just look at these beautiful wings! Looking from the top gives you a nice look at the way the wings are extended in a circle around her! (*´ω`*) This angle really stands out for me! Somehow from this angle the expression has a slightly different feel to it, and the wings are also capture so nicely as a kind of frame around her upper body that also perfectly covers up the area that I know a lot of people are dying to get a better look at! Be sure to add your Saya to your collection and enjoy her from any angle you please, whenever you please!! ♡

（´-`）.｡oO（I looked up all sorts of information about the game to write the article and it made me want to see all the different endings!)