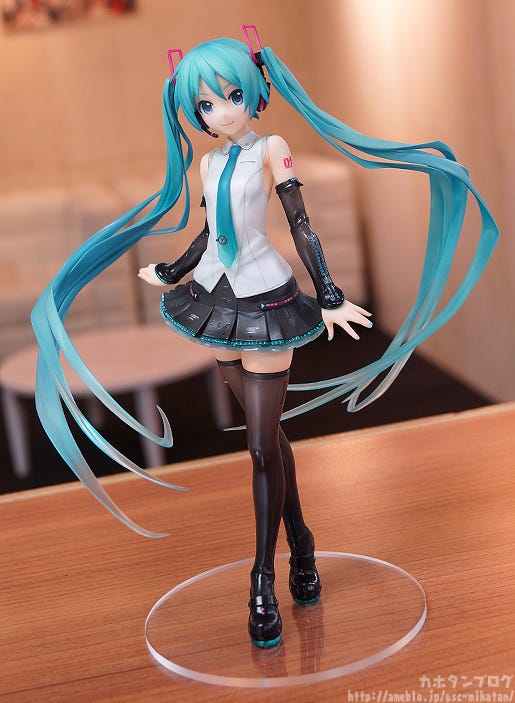 Today I’m going to be taking a look at the 1/8th scale…
Hatsune Miku V4X! A 1/8th scale figure of Hatsune Miku V4X, the upgraded voice synthesizer that allows for more natural and expressive singing! The figure is based on the main illustration for Hatsune Miku V4X done by iXima which features Miku in a beautiful, elegant pose! Her youthful body line has a lovely soft appearance which contrasts against the sharp appearance of her twin-tailed hair. Be sure to add her to your collection and enjoy the charm of the all-new Hatsune Miku!

The cute electronic diva is back in a brand new outfit!

The Hatsune Miku voice synthesizer software was upgraded into an easier to use version that allows for even more varied, beautiful singing options and released as Hatsune Miku V4X! This figure is based on the main package illustration for the upgraded Miku-san!!

Her futuristic outfit makes use of both translucent parts and metallic paint to bring out different textures all over the design! ▲The lower layer of the dress frill is translucent with the one above having a metallic appearance! Such amazing detail!!

You can also easily see the difference in thickness of the material between the skirt and her much thinner top, and both have been sculpted carefully including all the creases and wrinkles to give them that realistic fabric appearance.

The top also matches with the shape of her body nicely to show off her lovely curves! (｡･ω･)ﾉﾞ ▲ Her chest may be on the reserved side in terms of size, but the details of the sculpt gets full points!

The gentle, floating appearance of her thin hair is so detailed as it winds around her, and the twist in her hips and shoulders has also been captured beautifully! Be sure to take a closer look at the careful sculpt of her body including those gorgeous thighs once she joins your collection!!

This it the promotional poster for Miku! According to her planner Hamako, the idea was to create an effect similar to that on a fashion magazine! As Miku-san is standing in such a model pose it suits very nicely!! ▲Her initial release was 2008, so there are around 9 years between the two!

While there are a lot of changes in style, the charm to her design has never faded!

The original Hatsune Miku also made use of metallic, glossy paint to bring out that futuristic appearance!♪ In comparison, this time around Miku has a more mature appearance! She’s all grown up! ♥ ▲ There is something about her that makes her look so elegant! A gentle, calm kind of charming. (*´ｪ`*)

Also take a look at her lovely long legs! The paintwork to show the stretch in her stockings is perfect!!

Areas such as behind the knee have a much darker look, while the thighs and calves have a more see-through appearance! It really captures that well-fitting appearance nicely through the paintwork! The metallic paintwork on her heels are also stunning! (/ω＼)

The illustration has Miku’s hair looking relatively flat by design, and the figure has been tuned to capture a similar feeling! The sculpting is a part of it, but the subtle changes in color with darker colors on the inside to create a shadow that help to bring out that appearance on a 3D plane! ε=(｡・д・｡)

Not to mention the tips of her hair have that crystalline appearance through the use of semi-transparent parts! They look so beautiful!! ♪ Be sure to add the 1/8th scale electronic diva to your collection!
Hatsune Miku V4X!