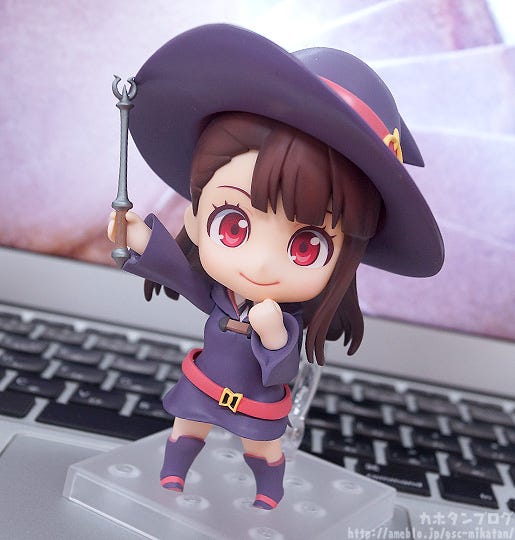 Even if I could use magic I don’t think I would ever be able to ride on a broom. Just the other day one of my friends even told me they don’t think I’d be able to float more than a few inches off the ground…

Anyway, today I’m going to be taking a look at…
Nendoroid Atsuko Kagari! From the anime series ‘Little Witch Academia’ comes a Nendoroid of the witch apprentice who looks up to Shiny Chariot – Atsuko Kagari! She comes with three face plates including a cheerful smiling expression, an expression with sparkling eyes for when she gets excited about magic as well as a flustered expression that captures her personality perfectly!

Optional parts include her staff, broom and the Shiny Rod, and she even comes with rabbit ears to recreate the scene where she failed to cast transformation magic. Be sure to add the always excited and cheerful Akko to your Nendoroid collection!

“My magic is a heart that has faith!!”

A Nendoroid of the character who saw a show by Shiny Chariot which made her decide to become a witch – Atsuko Kagari, perhaps better known as Akko!! ♥

Her eyes filled with curiosity, lovely smile and semi-long hairstyle with cute bangs have all been faithfully converted into Nendoroid size! Her Luna Nova Academy uniform has also been faithfully preserved in lovely detail for fans to enjoy!! ▲ The shirt and ribbon under the cloak can also just be seen! ♪

This is how she looks from the back! ヽ(ﾟ◇ﾟ )ﾉ ▲ The large size of the hat for the Nendoroid is rather adorable! ☆

In her hand she can be seen holding her magic wand, but the wand can also be  posed holding another item that has to be included with any witch! ヽ(●´Д｀●)ﾉ Which is of course her broom!!

In addition, this photo also shows off the first of her alternate face plates which is a face with sparkling eyes! This captures Akko when she gets all excited before flying magic classes!! ♡

Plus as you may have noticed, her witch hat can also be removed allowing for even more posing opportunities! Once the hat is removed the hair at the back can be attached with a ball joint allowing you to move it around for different nuances!

She can also be posed flying on the broom! Which brings us to her third face plate – a flustered expression perfect for when she makes mistakes in her magic! Another part which is perfect with this face plate is… Akko comes with bunny ears that slip in-between her front and back hair parts which allow you to display her not quite transforming correctly with the animal metamorphosis spell! They might even fir on certain other characters for even more fun possibilities! (∩・∀・)∩

And last but not least… The Shining Rod is also included!

Akko is so straightforward and honest with her feelings and they really come out on the Nendoroid! You can just imagine her talking about Shining Chariot with this lovely sparkling smile on her face as she holds up the Shining Rod with pride!!

Here are all the optional parts lined up! Together with the hat and alternate face plates, there are so many different options!! Be sure to add the cute witch-in-training to your collection!

In addition, purchases of Nendoroid Akko from the GOODSMILE ONLINE SHOP will include a Special Round Base as a bonus!! There is also currently a Little Witch Academia x animate Cafe collaboration cafe going on! I wrote a blog on it which you can find below, but unfortunately it’s only available in Japanese at the moment! ★ In addition to Nendoroid Akko, Nendoroid Ushio Kai-II will also be going up for preorder tomorrow! (´□｀｡) ⇒ You can find my blog review here!

The following products have preorders closing on the 16th March 2017 at 12:00JST! Don’t miss out!