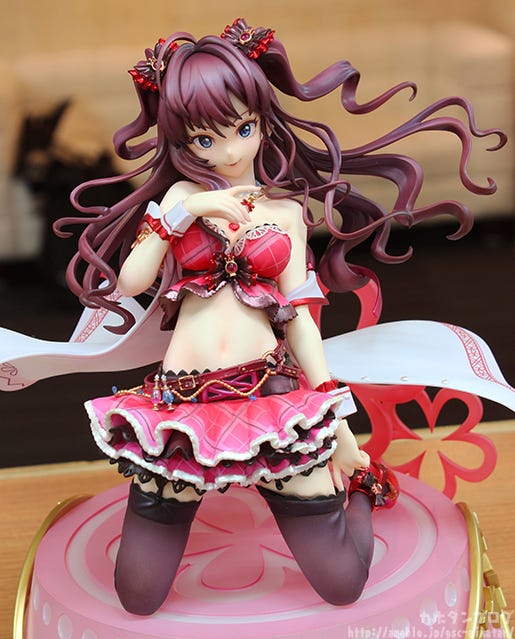 I hope everyone had an enjoyable WonFes! I have been been suffering from a cold ever since the event ended… someone get me an elixir! Suwabe (@gsc_suwabe) from the Corporate Planning Division here! “I will change into a mystical elixir.
One that no one has ever heard of!”

From the idol production game ‘THE IDOLM@STER CINDERELLA GIRLS’ comes a 1/8th scale figure of Shiki Ichinose! The figure is based on her ‘Mystic Elixir’ outfit giving her a bold, mysterious and sexy appearance as she appears on stage for her fans.

The jewels that adorn her outfit and the various bottles of perfume have all been carefully sculpted in lovely detail creating a high quality figure that is a faithful rendition of the original illustration! The base she sits upon is made in the image of the status menu from the game, bringing out the atmosphere of the game even more for fans to enjoy in their collection!

Apologies for the long wait, Producers! ▲ A photo taken at the event! The base made it’s first appearance at WonFes! The design is based on the status menu from the game! ▲ From the back the movement of her hair and outfit look so smooth and pleasing to the eyes I’ll take a closer look at this a little later! (｀・ω・´) The mysterious yet stunning appearance matches the name of her outfit so perfectly!

Anyway, let’s take a look at some of the more intricate details, shall we?

It’s not often I think fingers are the crux of a figure, but they are just so incredible on this figure! The index finger of her left hand pulling the sock really brings the figure to life – it looks so realistic!! The movement of the finger itself is one thing, but the creases that form in the sock just complete it so nicely!! ▲ Another close-up because I was too excited..

The amazing details on the accessories really make Shiki shine! They are just so amazingly intricate! ▲ The little jewel in the center of her already detailed ribbons! ▲ The crystals of her necklace look as if they could be real! The metallic appearance of her chain has also been included… and just look at the frills around her chest! ▲ The little perfume bottle in her hand… so small and yet so impressive! ▲ Those high heels! The shiny appearance, ribbons and jewels… wow! ▲The pattern along the bottom of her white cape parts looks lovely, as well as the flow of the material! But no matter what angle you choose to look from it still has such a rich, lively appearance that looks so beautiful! Just look at that belly button! And those shadows! Those shadows really make it seem like Ichinose really is right there with you! They just look so realistic!

Plus, I forgot to mention it during the accessory part above, but look at the little bottles along her hips as well as the patterns on her outfit!! To think that this figure will reach producers all over the world makes me realize just how amazing it is to ‘create’ something! Overall the figure already shows off a lot of skin, but that’s exactly why peeking through the little gap between her hair to see the bare back is all the more thrilling! You’ll get to see her from this angle and many more if you choose to add her to your collection!

A figure that no Producer should miss out on!
Shiki Ichinose: Mystic Elixir Ver.!