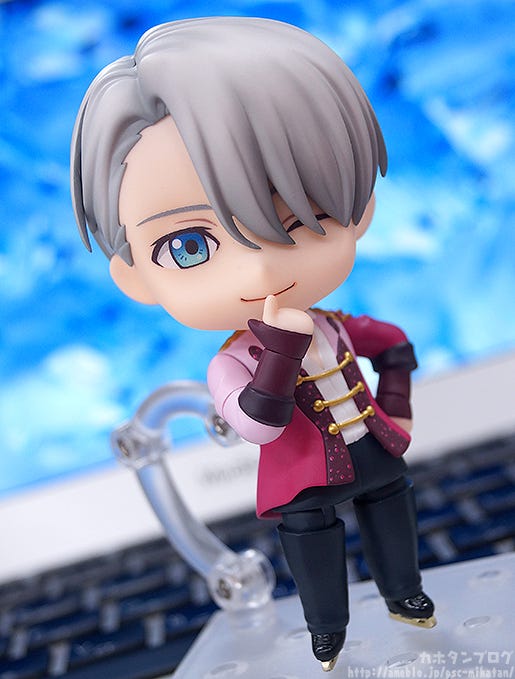 Today I’m going to be taking a look at…
Nendoroid Victor Nikiforov! From the popular anime series ‘YURI!!! on ICE’ comes a Nendoroid of the living legend of the figure skating world – Victor Nikiforov! He comes with three face plates including a gentle standard expression, a playful winking expression as well a smiling expression with a heart-shaped mouth!

From the anime series that quickly gained popularity around the world, “YURI!!! on ICE” comes a Nendoroid of the charismatic ice skater who prides himself in on being able to surprise people, Victor Nikiforov! His lovely grey hair, transparent blue eyes and overall mature air have all been captured nicely on the Nendoroid!

His prototype was revealed at WonFes last weekend, so I don’t think anyone expected him to become painted and available for preorder so soon!

This is already the second Nendoroid from YURI!!! on ICE! ☆ If we take a look from the back you can see the lovely gentle flow of his hair! He is wearing his outfit from the finale of the Grand Prix, so he also comes complete with a bouquet and a gold medal to pose him showing off his victory! ▲ That elegant appearance is preserved even in Nendoroid form!

Along with the playful winking expression above, he also comes with a gentle standard expression which allows you to see both of his lovely blue eyes! His mouth looks so sexy…! While I was taking photos of him I kept somehow imagining that the Nendoroid should have a clean, sweet and somewhat sexy aroma to it! It just looks like there should be a nice scent to him. Obviously he is nothing more than a figure and it was all in the mind, but it shows how much one sense can influence the others in my mind!

Just like Nendoroid Yuri Katsuki he also comes with bent arm and leg parts which allow for all sorts of poses! ♥

Moving onto his third expression, we have an adorable smile with his iconic heart-shaped mouth!! (*´♡`*) This face is so cute it just leaves me speechless!!

Not to mention the adorable little Makkachin beside him!! (●‘∀‘●)ﾉ” Makkachin’s head can be moved left and right for different nuances! ♪

This expression also works very nicely with the katsudon parts that are included with Nendoroid Yuri Katsuki! ▲ The katsudon and chopstick parts are included with Yuri, not Victor!

One of the best things about Nendoroids is that you can swap parts around the characters like this for all sorts of options! Another example is to switch this around and use some of Victor’s parts on Yuri! ▲ A story in the making!

Nendoroids also generally make use of the same joints for their heads, so you can also completely swap out the body between characters to create something amazing like this!!! ☆ Victor is a huge amount of fun by himself, but combining him with Nendoroid Yuri allows for even more fun! Recreate your favorite scenes from the series and come up with all original scenes as well!! Be sure to add the adorable living legend to your collection!
Nendoroid Victor Nikiforov! In addition, if you choose to purchase him from the GOODSMILE ONLINE SHOP you will also receive this Nendoroid Plus Rubber Strap: Victor Nikiforov as a bonus!! *You can find the GOODSMILE ONLINE SHOP here!

But that’s not all! We also have another product going up for preorder tomorrow! Special acrylic key rings that come with a little plate that can be placed on top of the main plate to dress them up in a different outfit!! ♪

A key chain as well as a pin to connect the plate on top are also included that isn’t shown in the images! Also note that this product will be available prior to release at AnimeJapan 2017 taking place from the 23rd March – 26th March 2017! Take a look at the Good Smile Company website tomorrow for more information!!

Last but not least, don’t forget that Nendoroid Yuri Katsuki is currently available for preorder!! ★ He also comes with a GOODSMILE ONLINE SHOP bonus and will be available until the 16th March 2017 at 12:00JST!! This means that you can even order the two of them together to save on shipping! Plus Yurio has already been announced to get the Nendoroid treatment! Look forward to him too!!

The WonHobby 25 items are currently up for preorder! Orders close on the 28th February at 12:00JST!!