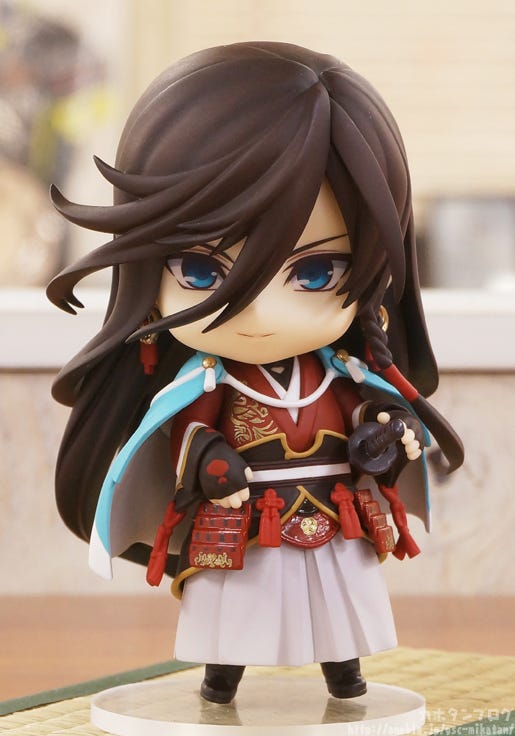 “I am Izuminokami Kanesada! I am awesome, powerful and recently one of the most popular swords!”

The sword said to be used by Hijikata Toshizou, the vice-commander of Shinsengumi! Izuminokami Kanesada is joining the Nendoroids!! This is the sixth uchigatana to join the Nendoroid Touken Ranbu -ONLINE- series! The alternating white-blue horizontal stripes on his haori jacket show his association with the Shinsengumi, and also contrasts so nicely with the deep red kimono he is wearing! From the front his hair already looks magnificent, but from the back you can see all the way down to the tips which really show off just how much volume his hair has!! The red string that ties to two sides together in the middle has also been faithfully included, giving a little touch of cuteness to the manly Izuminokami! (*´ω｀*)

▼Note the details on his equipment and accessories! He has rather fancy earrings and although they are tiny in Nendoroid size that have been carefully sculpted to look just as they do in his original designs! The covers on the back of his hand and the various shapes and patterns on the tassets and area around his hips are also amazingly intricate! ▲ The details on the tip of the scabbard! (ﾟＡﾟ;)

This really is challenging the limits of the amount of detail we can put onto Nendoroids! Such tiny little details are often omitted from the Nendoroid designs, but Izuminokami is too awesome to not include as much as possible!! ▲This allows for more dynamic poses!

Normally the haori sticks directly to the shape of his body, but this movement allows you to pose him with it fluttering around him which can make for some really epic poses that suit an epic character! The kanji on the back of the hoari reads ‘Truth’ – a symbol of the shinsengumi!

▼Time for some combat poses! ▲”Alright, let’s get this started!“

His combat expression has gritted teeth and one eye shut! He looks to be having quite a rough battle! The various included parts allow for all sorts of different posing opportunities! You can see the haori jacket is posed quite opened out for this display! ▲ The base features his emblem!

This is the same style as all the previously released Touken Ranbu Nendoroids!

▼Nendoroid Horikawa Kunihiro will also be up for preorder at the same time! He’ll be introduced on the blog on the 5th March!!