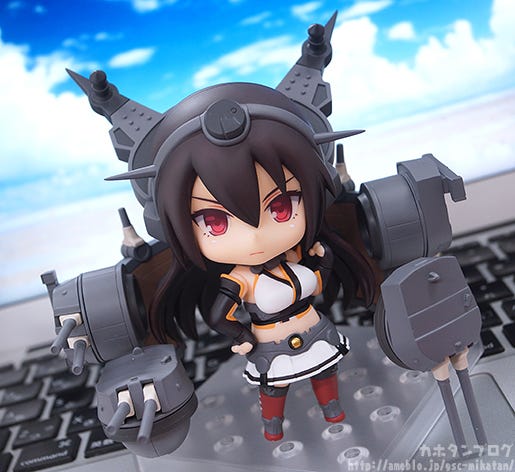 This weekend is WonFes!! Along with various items on sale we will also have many brand new figure announcements and prototypes on display! Look forward to the weekend! ♪

Anyway, today I’m going to be taking a look at…
Nendoroid Nagato! From the popular browser game ‘Kantai Collection KanColle-‘ comes a Nendoroid of the first Nagato-class battleship – Nagato! She comes with three face plates including a confident standard expression, a shouting expression for combat as well as a gentle smiling expression. Her four turrets are all separately articulated for all sorts of posing options, and each come with their own effect parts to display her lighting up the ocean in battle!

The Nendoroid also comes with a bamboo broom and apron which fans may recognize, as well as a glass of orange juice which all allow you to display her in some less militaristic poses! Be sure to add the super-dreadnought and pride of the Japanese navy to your collection and enjoy all sorts of different situations in Nendoroid size!

A super-dreadnought battleship that was the pride of the Japanese navy is joining the Nendoroid series! Her long black hair, pointed eyes, huge ship parts and equally impressive bust… everything about Nagato has been faithfully captured in Nendoroid size!! ♡

As a side note, Nagato is the 35th KanColle Nendoroid excluding any of the abyssal ships! ヽ(ﾟ∀ﾟヽ 三 ﾉﾟ∀ﾟ)ﾉ ▲ You can hardly see her back due to sheer size of the ship parts!

The four different turrets are all independently articulated allowing you to display to suit all sorts of different situations! ☆ Along with her rather serious standard expression, she also comes with a shouting face plate to pose her chasing down the enemy fleet in battle! She also of course comes with firing effect parts for ALL of her turrets, which really shows off her impressive firepower! But that’s not all…!

“Don’t underestimate the power of the Big Seven.“ The ship parts can open out to the left and right to pose her fully deployed for attack! The fiery effect parts look great with Nagato, but I could also see them looking great on some other KanColle Nendoroids as well! ε=(｡・д・｡) ▲ The sculpt makes them look like very wild flames!

You may have noticed from the last photo that the turrets themselves are also highly articulated! Just take a look at this animation to get a better idea!

The ability to move them around so much more playability to the figure! Be sure to play around with each turret until you find the perfect look!  (｡･ω･)ﾉﾞ

Anyway, I’ve gone through the more serious side of Nagato, but I’m sure lots of fans also want to display her with a more everyday kind of look, which is why her third face plate is a much more gentle smiling expression! ♡ (She looks like a kind neighbourhood land lady here!!)

A bamboo broom as well as an apron are also included which suit the gentle expression so nicely! ε- (´ー`*) ▲ The creases in the apron are so nicely sculpted!

As a side note, the parts work with her shouting expression too! ♪ ▲ You can also have her hold the broom this way up!

Last but not least! A glass of orange juice from the navy base counter bar!

It might be a non-alcoholic drink, but this pose makes her look a bit like she is inviting you to come drink with her!! The Nendoroid allows you to enjoy poses from epic combat scenes to more everyday drinking and cleaning scenes! Simply select the pose that you think suits her best – or mix it up whenever you feel like a change! ♥

A Nendoroid of one of the Big Seven!
Nendoroid Nagato! Plus as usual, purchases from the GOODSMILE ONLINE SHOP will include a ‘Nendoroid Nagato’ Special Box Sleeve & Special Nendoroid Base as a bonus!