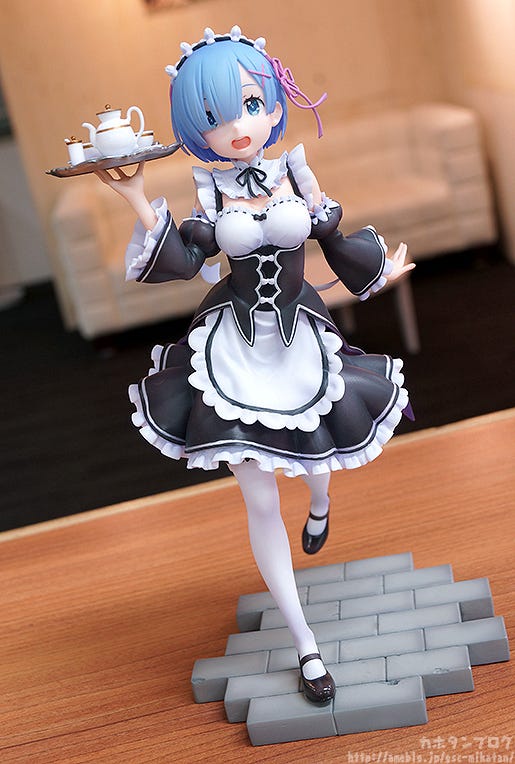 What do you mean WonFes is next weekend?! It can’t be that soon!! Time really flies doesn’t it! As always we will have a huge number of announcements and much more to enjoy, so I hope everyone is looking forward to it!! (/ω・＼) From the anime series ‘Re:ZERO -Starting Life in Another World-‘ comes a 1/7th scale figure of one of the maids that serves at the Roswaal mansion, Rem!

The figure is based on the 2nd volume of the Blu-ray/DVD jacket cover and features Rem wearing her characteristic maid outfit holding a tea set on a tray to show her hard at work in the mansion. A set of alternate parts to display her in her demon form are also included together with her morning star weapon, allowing you to choose how you prefer to display her in your collection!

The younger yet much more competent of the twin maids that work in the Roswaal mansion, Rem has been transformed into a lovely 1/7th scale figure! ♥

The figure is based on the 2nd volume of the ‘Re:ZERO -Starting Life in Another World-‘ anime Blu-ray/DVD jacket cover, and features the adorable Rem prancing forward ready to serve some delicious tea!

That lovely smile together with the bouncy wide steps she are taking make her look so cheerful!! The figure really brings out her charm as a maid who really enjoys her work! ヽ(●´Д｀●)ﾉ

Her maid outfit is filled with frills and creases and has been so intricately sculpted! Even from the back the details are a treat to the eyes! Note how the movements of her dress have been matched to her stride to capture the feeling of movement on the figure! ♪

Another important detail to note from the back is the sculpting of her shoulder blades! Rem and Ram’s maid outfits have such a lovely design that looks just as cute from the back, so it’s very satisfying to look at her from almost any angle! ♡

The tray she holds with her right hand holds a tea set for two which is also lovely and detailed! Just look at the little teaspoons!! ★ ▲ The frills of her outfit around the shoulder are all carefully crafted!

But perhaps the most important thing about the figure is this adorably innocent smile on her face! ♥ Don’t you feel the urge to protect this smile?!

The slightly upturned eyes and her wide-open mouth that show off her upper teeth all come together to make such a cute appearance!!

Another area that really stands out to me is the curves of her legs – particularly the thigh area down to her ankles which have their shape captured perfectly by the tight white stockings! ε- (´ー`*) ▲ The soft look of her thighs make them so very touchable!

The details on her upper body are so eye-catching that I think this area is often overlooked, but it is by no means no worth the look! Just look at those little shoes as well!!

But that’s not all!!! This product allows you to enjoy more than just the angelic side of Rem! Fans will know there is a demon inside her and she comes with interchangeable parts to display that side of her too!! The interchangeable parts include both an alternate expression and alternate arm parts! Such a huge change compared to the smile above!! Those maddened eyes, the blood stains on her cheeks… the ominous appearance is a huge contrast to the cheerful smile we saw just a few seconds ago!!

The spurts of blood on her face are not something we see very often – particularly on bishoujo figures, and Ekoshi from the production team apparently spent ages perfecting the paint job through trail-and-error!

Apparently it was very difficult to get just the right area for the blood to look good while capturing not only the madness of her expression but also the feeling of emptiness and lack of emotion. It came out looking so convincing!! ▲ The red blood contrasts her white skin so clearly!

Anyway, moving on to the included morning star part! This part makes use of an actual lightweight chain which allows you to adjust the posing in various ways to better suit your pose! ☆ ▲ Simply play around until you find the position you like! ♪

Plus another rather unique feature on this figure is that the horn makes use of a translucent material, and can also have a MILIGHT 316 (sold separately by Hiromi Sangyou) placed inside to light it up!（You can find the MILIGHT on amazon.co.jp here or amazon.com here!) Making use of this light-up effect in a dark area makes for a truly ‘demonic’ display for fans of Rem’s fanatical demon side! (/ω＼)

According to Ekoshi, if you paint the tip of the light with a little red it adds an even stronger atmosphere! (∩・∀・)∩ ▲ You simply push the tip and it lights up! Isn’t science amazing!

As a side note, I want to point out that the expression and right arm are not the only alternate parts… ▲ I made a GIF to try and explain how amazing these fingers are!

Quite an impressive line-up of optional parts for a scale figure! Perhaps even one of the largest sets of all GSC scale figures!

Whether you love to see the gentle, smiling Rem by your side, or prefer to have her more fanatical demonic side in your collection – this single figure let’s you enjoy them both!! ♥

She’ll be up for preorder from the 14th February!

（。´-`）.｡oO（You could preorder it for yourself or a partner as a Valentine’s gift!）

Plus, don’t forget that this lovely Nendoroid is currently up for preorder!
Nendoroid Ram! She even comes with hands to hold parts with the previously released Nendoroid Rem!