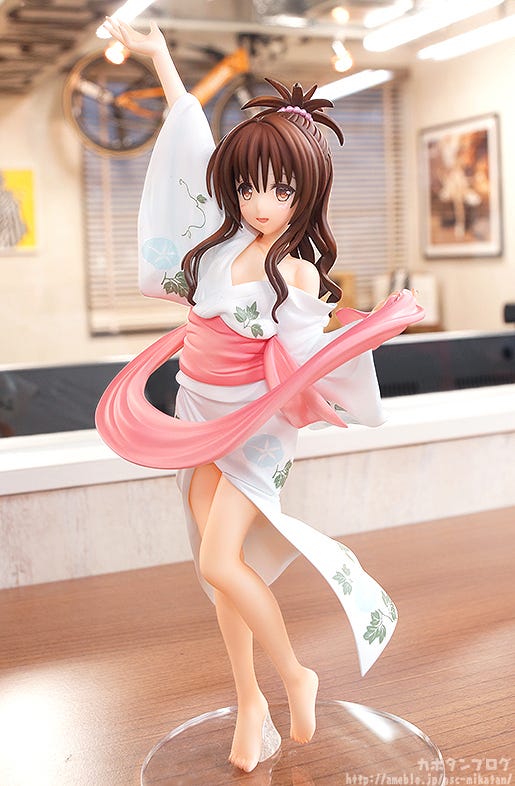 Hello everyone!! Kahotan here! (@gsc_kahotan) Today I’m going to be taking a look at some of FREEing’s products, starting with… From the popular series ‘To Love-Ru Darkness’ comes a figure of the perfect sister that everyone wishes they had – Mikan Yuuki wearing a yukata! The reliable Mikan-chan is joining the previously released characters from the series also finding her yukata to be rather loose! Be sure to head out to a festival together with her and make some unforgettable Summer memories!

The sexy pose of her loose yukata mixes with the cute side of her personality capturing the best of both worlds for fans to enjoy in their collection! Be sure to display her with the previously released characters in the series as well as the recently announced Yui Kotegawa: Yukata Ver. and complete your To Love-Ru Darkness yukata harem!

The perfect sister is also joining the yukata harem! ♡

The little sister with a bit of a mischievous side has been transformed into an adorable 1/8th scale figure wearing a yukata! ♪ Mikan’s slender, gorgeous body has been very faithfully preserved on the figure, and the skin also has that soft-looking appearance you would expect of a young woman! ☆ You can make out the sensual body right through the fabric of the yukata! You can really see that FREEing likes to pay attention to the important details here!!

From the back of the figure you can see her cute permed hair and her hand lifted up in the air in an energetic pose! Each of the little fingers on her hand as well as the toes on her feet have been sculpted in amazing detail too – take a nice close look! ▲ Her playful personality really comes out nicely even from the back! ♪

This figure is a part of FREEing’s Y-style series of figures that capture your favorite characters dressed in Japan’s traditional yukata! ε- (´ー`*) There have been over 35 figures in the series!

Be sure to add the cute little sister to your collection!
Mikan Yuuki: Yukata Ver.! She is currently up for preorder! ♥

But that’s not all! Yui is also up for preorder! From the popular series ‘To Love-Ru Darkness’ comes a figure of the head of the school disciplinary committee – Yui Kotegawa! She has been sculpted wearing a yukata in the middle of a wardrobe malfunction that shows off her sexier side for fans to enjoy!

For some reason her yukata seems to be revealing more than any of the other characters in the series… no matter how much she tries to hide it she can’t fully cover up her impressive bust! Be sure to display her with the other girls in the set as well as the upcoming Mikan Yuuki to fully recreate your To-Love Ru yukata harem!

“Please refrain from any actions that may cause disorder!”

…of course the character with a line like this would have the most revealing pose of them all! (/ω＼) Of course the figure is made from hard materials, but looking at those soft looking boobies you can’t help but think they would be soft to the touch!!

Plus just like Mikan the sculpting of the yukata particularly in the area of her bottom is absolutely fantastic! The way the yukata sticks to the shape of her body so closely really shows you the passion that FREEing has put into the figure!! GJ!! The sexier sides of the figure are definitely easiest to notice, but the dynamic pose and movement put into her hair and yukata also give the figure as a while a really impressive appearance that really captures the perfect second in time for fans to enjoy in their collections! ε=(｡・д・｡)

Here is the series all lined up together! ☆ Both Golden Darkness: Yukata Ver. and Momo Belia Deviluke: Yukata Ver. are both already released, so you should be able to find them in your favorite figure stores! I can’t wait to see what will join FREEing’s Y-style series next! ☆