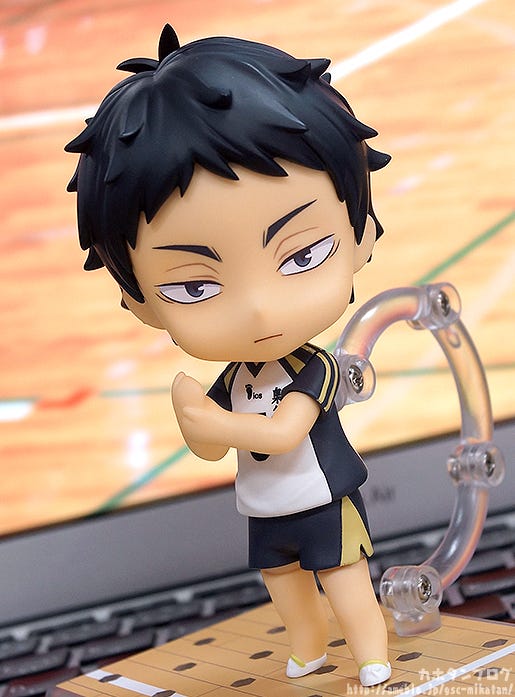 Today I’m going to be taking a look at at…
Nendoroid Keiji Akaashi! He comes with three face plates of his own including a standard expression, a grinning expression for when he performs a dump attack as well as a fed-up expression for when Bokuto goes into his dejected mode. In addition, a dejected face plate designed for use with Nendoroid Kotaro Bokuto is also included to allow for even more fun poses between the two of them!

A volleyball and a base made in the image of a volleyball court are both included together with a net part. A rice ball as well as ‘rice grain’ and ‘chewing’ stickers that can be used on his face plate are also included allowing for even more options! Be sure to add the reliable setter to your collection and recreate all sorts of scenes together with Kotaro Bokuto!

The vice-captain and setter of Fukurodani Academy’s volleyball team as well as the character that keeps Bokuto’s excitement in check – Keiji Akaashi is joining the Nendoroids!

His short hair , sharp eyes that show his perception and insight into the game, nicely shaped eyebrows and tightly shut mouth… all of his traits have been faithfully converted into Nendoroid size for fans to enjoy in their collection! As with most Nendoroids from the series in the past, he also comes with a volleyball and a base made in the image of a court allowing you to pose him playing in a match or practising! ヽ(ﾟ∀ﾟヽ 三 ﾉﾟ∀ﾟ)ﾉ ▲ The calm and composed setter!

You can combine these parts with this grinning expression to pose him going in for his dump attack!! You can also pose him in various other situations from the series, or even your own original scenes!! ▲ I love this expression while holding out the half-eaten rice ball! This is actually just his standard expression, but the figure comes with rice stickers and chewing stickers which can be added to the expression to recreate this pose!

▲ The lines on the top are for the ‘chewing’ lines.

The sticker includes lots of spares so you don’t need to worry about messing up when you stick them on! Simply attach and remove the figures whenever you see fit! Keiji also comes with a Dejected Face Plate designed for use on the recently announced Nendoroid Kotaro Bokuto!! This allows for even more poses between the two of them!

Of course Keiji also comes with a fed up expression which works with the pose perfectly! ♪ In other words, there are four face plates included with Nendoroid Keiji Akaashi!

“I think someone just complemented me!” “Don’t pass me the ball anymore!” Be sure to add the cute reliable setter to your collection!
Nendoroid Keiji Akaashi!

He’ll be up for preorder from the 17th January!

Plus, orders from the GOODSMILE ONLINE SHOP will include a Nendoroid Plus Rubber Strap: Keiji Akaashi: Fukurodani’s Pillar Ver. as a bonus! Also be sure to check out the other Haikyu! items currently up for preorder! The preorder period at the GOODSMILE ONLINE SHOP will allow you to order both of them together to possibly save on shipping! Make sure you don’t miss out!