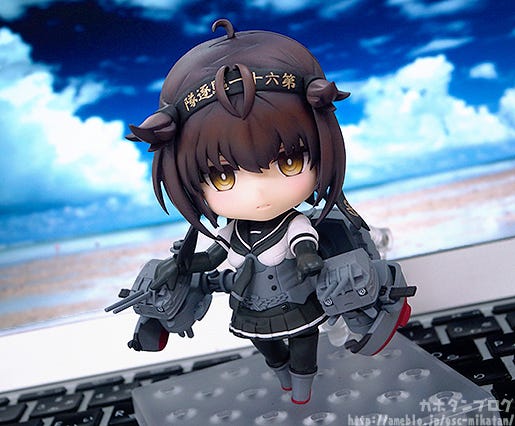 Hello everyone!! Kahotan here! (@gsc_kahotan) Today I’m going to be taking a look at the latest ship in the Nendoroid KanColle fleet… From the popular browser game ‘Kantai Collection -KanColle-‘ comes a Nendoroid of the fourth Akizuki-class air-defense destroyer – Hatsuzuki! She comes with three face plates including her standard expression, a sidelong glance as well as a smiling expression. Just like Akizuki, her Choujuusenchihou-chan 10cm gun turrets can be detached and displayed on their own.

Nendoroid Hatsuzuki comes with both turret firing effect parts as well as torpedo firing effect parts allowing you to recreate a variety of combat scenes! Other optional parts include a plate with a cutlet for her to hold, a canteen as well as the sugar candy she received from Isuzu! She even comes with a utility boat in case of emergencies, allowing you to recreate all sorts of situations in Nendoroid size!

“Nendoroid Hatsuzuki heading out! Leave this one to me!”

The fourth Akizuki-class anti-air destroyer Hatsuzuki is joining the adorable Nendoroid world! Her unique hairstyle that looks a bit like animal ears has been faithfully converted into Nendoroid size together with her monochrome outfit!

The hair-band she has in her hair reads ’61st Destroyer Division’ with a little anchor mark on the one end, and the ship parts are all sculpted in lovely detail for fans to enjoy in their fleet! ♥

The adorable Choujuusenchihou-chan gun turrets can be spun and moved around for all sorts of fun posing options!  (*´ｪ`*) ▲Those spinning eyes are so cute!

In addition, both of the turrets as well as the torpedo launcher on her back all come with firing effect parts allowing you to quickly transform her into combat mode! ♪ Along with her standard expression which has been used for all the photos above, she also comes with this expression with a pompous sidelong glance! ” …either way, I will protect you… until the very end.”

Moving back to her standard expression, this pose suits it perfectly! Just look at her hands!! Look at the way she is pulling the gloves down onto her hands!

The way they are sculpted to look so stretched out to put her in the “Let’s do this” kind of pose!! It’s the little details like this that really bring out the magnificence of figures!!

Even though there is absolutely no skin showing, the way the glove ‘wraps’ around the hand forces your mind to picture the bare hand on the inside of the glove and the uninterested eyes of the standard expression are looking away as if it’s just another day on the job – the figure really tells a while story with just a single pose!

This pose isn’t even in the product description, but I loved it so much I had to cover it in detail here!!

I get the feeling that I’m only really getting through to a very specific type of fan by focusing on this glove… but it really made such an impact on me! Just this glove is enough to get my imagination and dreams thinking of all sorts of things!!

But moving on, she also comes with the usual food parts!

First up we have a plate with a cutlet! ▲ I’ve never made a cutlet before, but if Hatsuzuki gives me a smile like that I’d be happy to make her one!

On that note, her third face plate is this cheerful smiling expression! ♡ ▲ A rather reserved smile, but still so adorable!

She also comes with a canteen as well as sugar candy! If you have ever listened to her 15:00 time announcement line you may remember that she received both of these items from Isuzu! The line from the game just said “water”, but we interpreted that as a canteen for the Nendoroid! (｡･ω･)ﾉﾞ

Plus! A little utility boat is also included!! You can display it beside her or with other ships for various display options!

Be sure to add the reliable destroyer to your fleet! She’ll be up for preorder from tomorrow! ☆

As usual, purchases from the GOODSMILE ONLINE SHOP will also include a Special Box Sleeve & Special Nendoroid Base as a bonus!

*The base will be the standard 8cm x 8cm type. You can find the blog review by Chan-shuu-senpai here:
Nendoroid Akizuki (KanColle) ▲ She even comes with a half-damaged body!

They will be fun to display together when Nendoroid Hatsuzuki is released! ♡

▲ I can just imagine the two of them chatting! ♪

Nendoroid Pola is also on the way! I can’t wait to see what optional parts are included with her! ヽ(●´Д｀●)ﾉ

Lots of preorders are closing this week! Preorders from the GOOD SMILE ONLINE SHOP are all closing on the 12th January!!

There are also lots of items with exclusive bonuses, so don’t miss out! (｡･ω･)ﾉﾞ