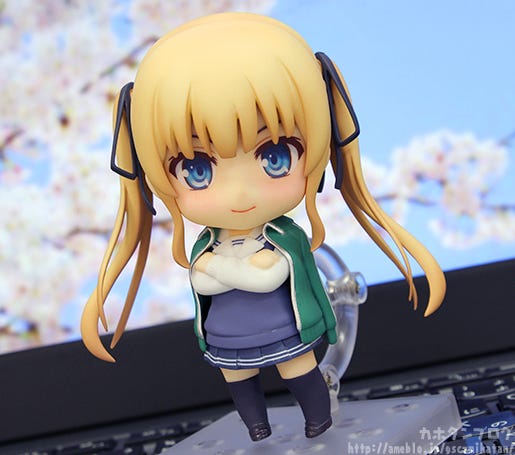 I know it’s a bit late, but Happy New Year! Suwabe (@gsc_suwabe) from the Corporate Planning Division here with my first blog in 2017! Today I’m going to be taking a look at… From the popular anime series scheduled to air from April 2017 – ‘Saekano: How to Raise a Boring Girlfriend ♭’ comes a Nendoroid of the up-and-coming illustrator Eriri Spencer Sawamura wearing her school uniform! She comes with three face plates including a standard expression, an angry expression as well as a soulless expression allowing you to recreate various different scenes from the series.

Optional parts include special twin-tail hair parts that can be used to recreate her ‘twin-tail slap’, a sketchbook as well as Eriri’s favorite mechanical pencil. Her green training jersey is also included and can be worn over her shoulders allowing you to pose her in all sorts of different situations!

The little details on her are so amazing! (ΦωΦ) Her training jersey, skirt, the lines on her collar and even the shiny look of her shoes – even in Nendoroid size the detail is lovely! ★

Personally the fact that the zipper on her jersey has the silver line of paintwork really stands out to me!

The jersey can also be removed! ▲ You will need to make use of her folded arms to have her wear it! ♪ But perhaps one of the most common things that comes to mind with Eriri is her various facial expressions! The Nendoroid comes with three options including a standard expression, an angry expression as well as a soulless expression!

My personal favorite is the angry expression! I can think of so many ways to enjoy this face!! The fact that she is not only angry but also has the slight blush on her face that captures her personality so nicely! Not to mention it even has the moe fang showing! Definitely an expression with all sorts of possibilities!! ▲ Displayed with the normal twin-tail on the left for comparison!

You can attach these to instantly add more dynamic movement to her hair! Just looking at it makes me replay the scene from the series in my mind! ▲ Yep. Just as cute from this angle!

Onto her soulless expression! Even if her hands and feet and completely straight and not even trying to make a pose this expression still looks adorable!! Not to mention that the expression could easily be used on various other Nendoroids with ease!

Combine the soulless expression, sketchbook and pencil to pose her struggling to think of what to draw! (ΦωΦ)b Be sure to add the expressive Eriri to your collection! ♡

Orders from the GOODSMILE ONLINE SHOP are open until the 2nd March 2017! Make sure you don’t miss out!
http://goodsmileshop.com/en/p/GSC_NEN_WD_00721/

In addition, orders from the GOODSMILE ONLINE SHOP will also include an acrylic ‘egoistic lily’ Nendoroid Base Keychain as a bonus! The design hasn’t been revealed just yet, but you’ll get the idea if you take a look at the bonus included with Nendoroid Megumi Katou!

On that note, don’t forget that you can still preorder Nendoroid Megumi Katou as well! Orders close on the 12th January 2017 at 12:00JST!! If you order them both together you can even save on shipping!! ♪ Plus, Nendoroid Utaha Kasumigaoka is also on her way! (`・ω・´) “Stop looking at the product photos! Can’t you come up with your own poses?!”

（´-`）.｡oO（ I tried to use some of Kahotan-senpai’s photo techniques! )