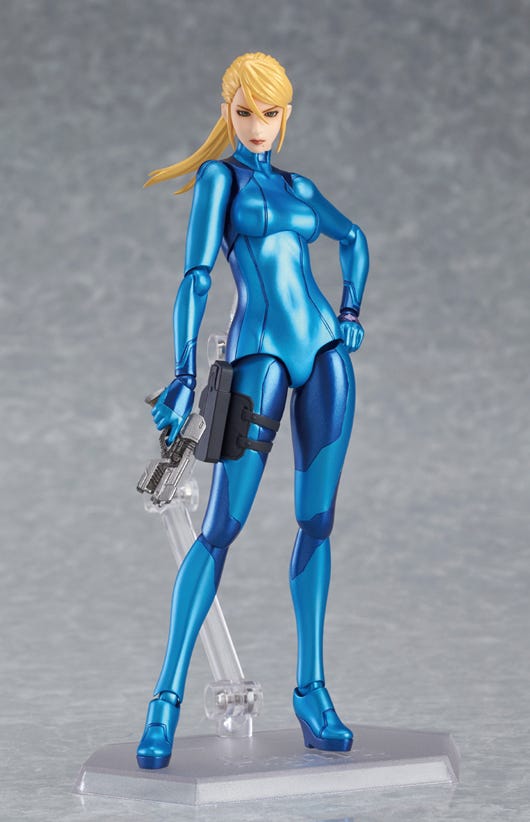 Today I’m going to be taking a look at this figma from the popular action game ‘METROID Other M‘…
figma Samus Aran: Zero Suit ver.! At first glance you might think this is a scale figure as the joints don’t stand out at all on her design – her unique body line has been preserved perfectly in figma form! Not to mention that the color of her Zero Suit has also been faithfully retained!

Her healthy looking body as well as the tight metallic suit make for such a treat to look at, and those stomach muscles really go to show off just how fit she is! Her main weapon, the handgun is rather small, but very intricately detailed! The Zero Suit from the back… quite the view!

In this photo the handgun is holstered by her hip! A little clip is included like this to be attached and removed whenever you switch between having her handgun drawn or holstered! The shoulder and hip joints make use of  drawer joints which allow for all sorts of epic action poses! Her ponytail also has a ball joint to match up with the poses!

Her first alternate expression is this Glaring Expression! She also comes with Adam’s Helmet to recreate the Bottle Ship escape scene!

She even comes with short hair parts to recreate the flashback scenes from the game! The expression here is her Smiling Expression! Here she is displayed with the previously released figma Samus Aran which was wearing the power suit! As you can see, she comes with hand parts to recreate her classic thumbs-up pose as well!

figma Samus Aran: Zero Suit ver.
She is up for preorder from today!!

Make sure you don’t miss out! Preorders at the GOODSMILE ONLINE SHOP are open until the 13th July 2016!:
http://goodsmileshop.com/en/p/GSC_FIG_WD_00306/