May 18, 2012Other CommoditiesBy Kahotan
Check out more figures at the
Good Smile Company website!

Yesterday I went to borrow a certain prototype! 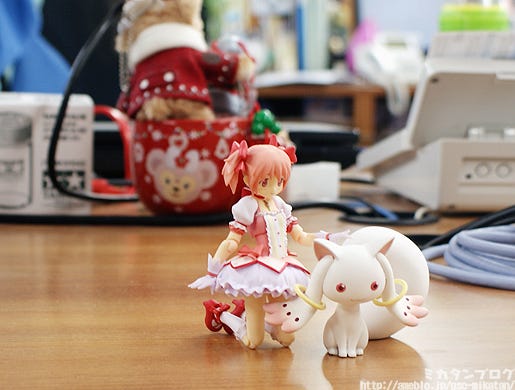 On the left is figma Madoka and the right is a Kyubey prototype!

Yep! Today we’ll be looking at a much bigger Madoka than normal! But not only is she big, she’s also posable, makes use of real fabric and is overall just amazing!

This blog is the very first look at her!

Such an important product being revealed on my blog is such an honor! Thank you! Today we’re looking at a product made between lots of figure companies, so the pressure is on to play around to the very best of my ability! ^^ 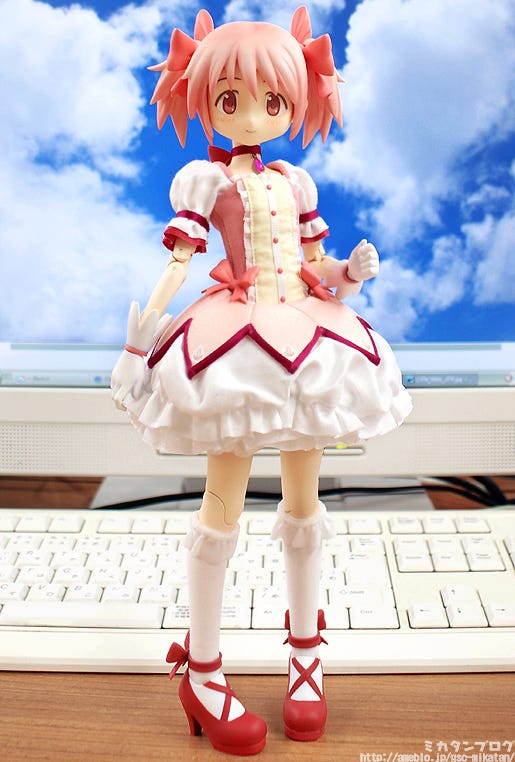 MEDICOM TOY is well known for their Kamen Rider and Ultraman toys, and now they are released ‘REAL ACTION HEROES’, the first of which will be Madoka Kaname. It’s a collaboration between three companies which are shown in the initials ‘MGM’ – MEDICOM TOYS. Good Smile Company and Max Factory!

I was thinking they should be called ‘HEROINES’, rather than ‘HEROES’, but whatever! :P 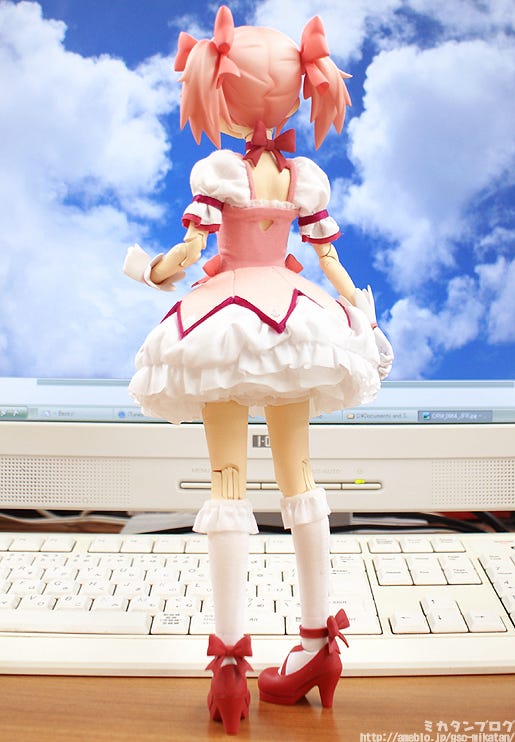 I have been quite involved with the REAL ACTION HEROES series myself.

Her clothes are made from real fabric!
It’s like closing the gap between the world of figures and dolls! You can love her and pose her just a like a doll! 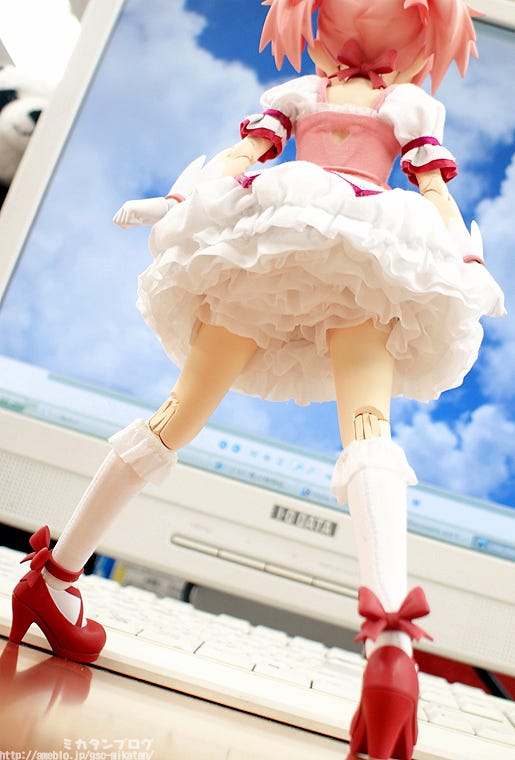 Her skirt’s frills are simply perfect!

Even as a normal figure these frills were hard to get right, but now with real fabric they look perfect! Plus it’s so soft to the touch!

As a side note, not her entire outfit is made from fabric – areas such as the ribbons and gloves are still made from PVC. It all comes together to really create something that looks just like it jumped out from the anime world! 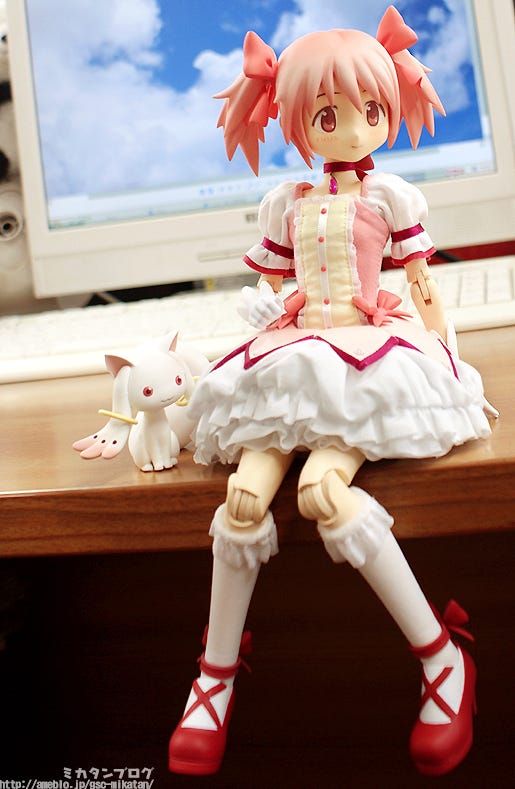 It’s so much fun to move her around!

You can make all sorts of poses like this one – sitting on the edge of a desk! Madoka’s skirt is really big so she sits nice and securely balancing on it! :P

There are joints in the shoulders, elbows, hips, thighs, knees, ankles and more – you can really pose her around just like any standard action figure! 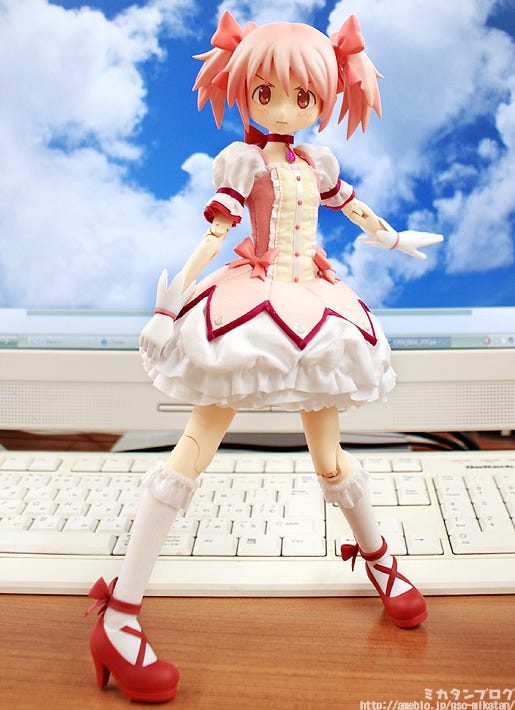 Just like figmas, she comes with replaceable expression parts! Here we have a glaring face for Madoka! She also comes with multiple hand parts – so many options to help you recreate your favorite scenes! 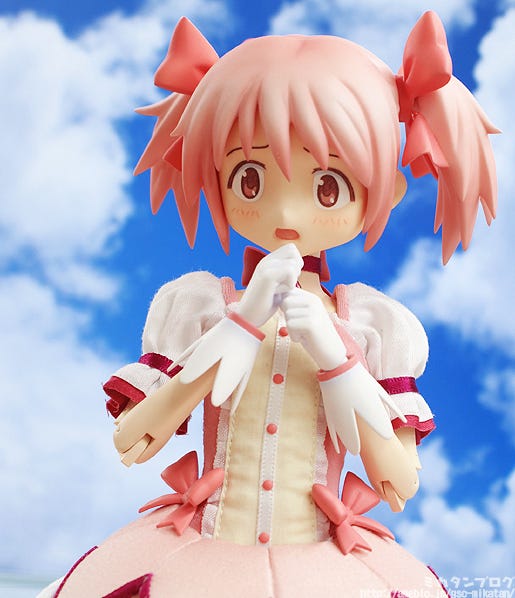 She also has a scared expression!

I’m sure some of you will remember this expression!

The head parts were all made by Max Factory based on the figma designs!

Normally when something is blown-up in size like this the quality suffers, but not when Max Factory is behind the designer’s seat! I believe the face is the most important part of a figure, and Max Factory have made sure that anyone who thinks the same will be impressed with this figure! 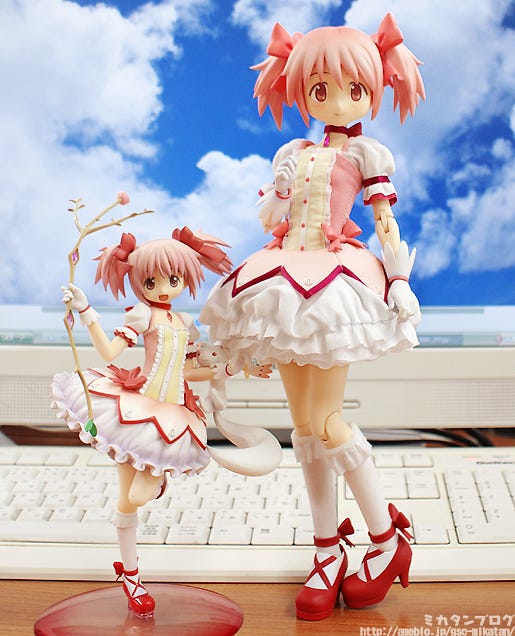 It’s actually quite a bit larger when you compare them like this. The RAH Madoka measures an amazing 30cm in height! 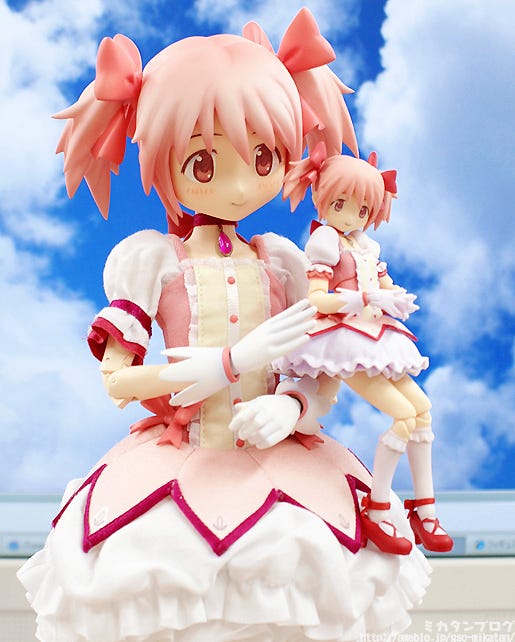 The figma is almost a doll size for the RAH figure! She can sit on her arm with the help of a little double-sided tape! :P

More info will be up on MEDICOM TOY’s site soon!

Note that this isn’t a product distributed by Good Smile, we just helped with the production! Also watch out in upcoming hobby magazines to see some of the other optional parts she might be coming with!