I know that point marker…! 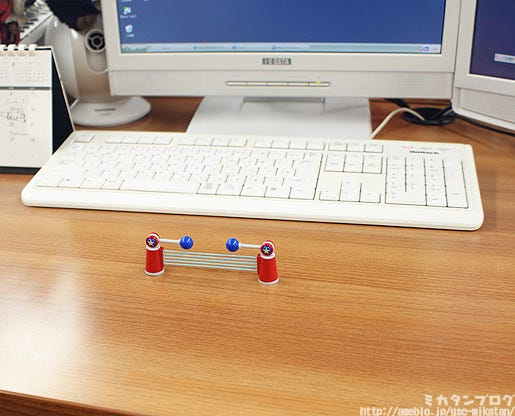 It’s the half-way marker from Sonic!

I’m finally through to the half-way point of all the work that has been piling up in front of me. I’m not sure if I’ll be able to get through the other half, but at least I’m saved up until here!!! ( ゜∀゜) Mwahahaha! 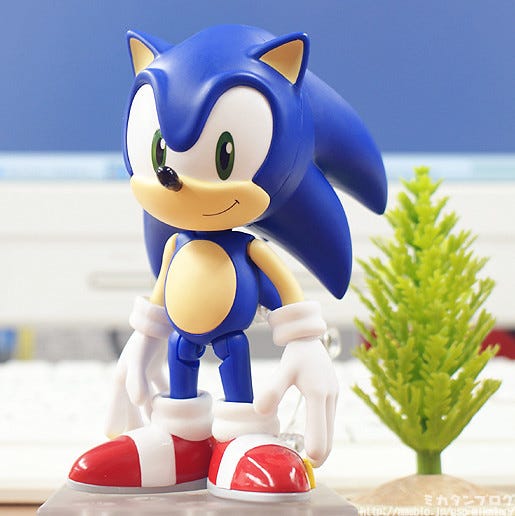 Today I’ll be doing a quick review of this Nendoroid!

From the popular game ‘Sonic’ game series that has just had it’s 20th anniversary comes a Nendoroid of the super fast hedgehog himself, Sonic the Hedgehog!

The Nendoroid also comes with various extras from the game, such as an item box, a ring, chaos emerald and half-way point marker! He also comes with parts that allow him to be posed in his famous running pose! 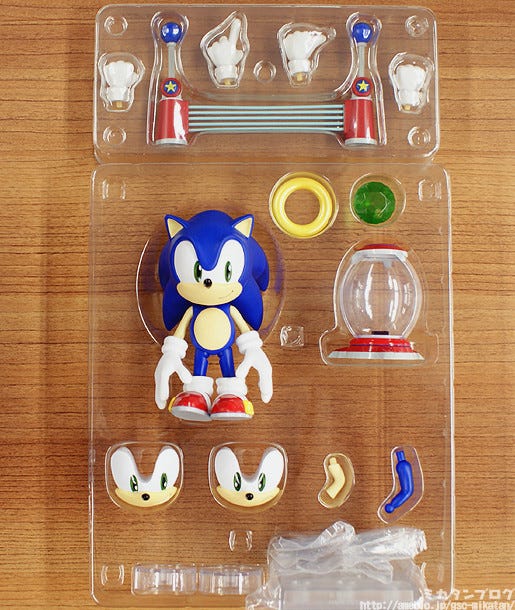 There was too much to fit in just a single blister pack, so an extra second layer is connected to the top! You can see he comes with plenty of hand parts, a bent leg part, some extra expressions and some lovely optional items to play around with! 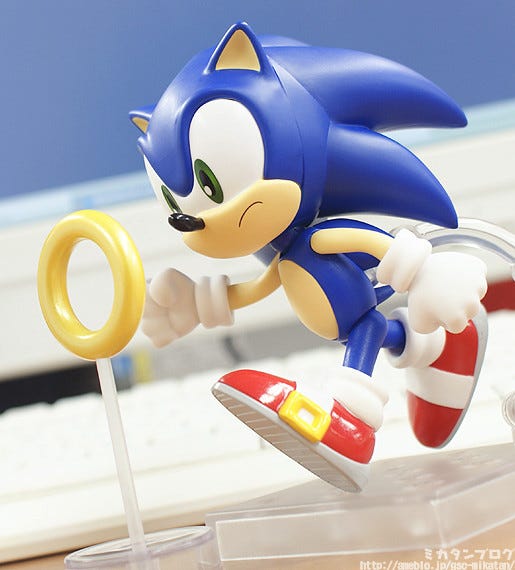 It wouldn’t be Sonic without a ring!

On the original Japanese blog I accidentally called it a coin when I did the prototype review… I can’t believe I made such a silly mistake…. I’ve actually played most of the Sonic games and enjoyed them quite a lot, so I have no idea why I called it that…

He comes with a dashing face ideal for running scenes!

Sonic is a bit of a unique Nendoroid in the fact that his head doesn’t separate at the back like normal Nendoroids. When you want to switch out the expression parts you simply need to pull the expression off at the chin area and replace it with the one you want. (I don’t recommend pulling thems off by the nose!) 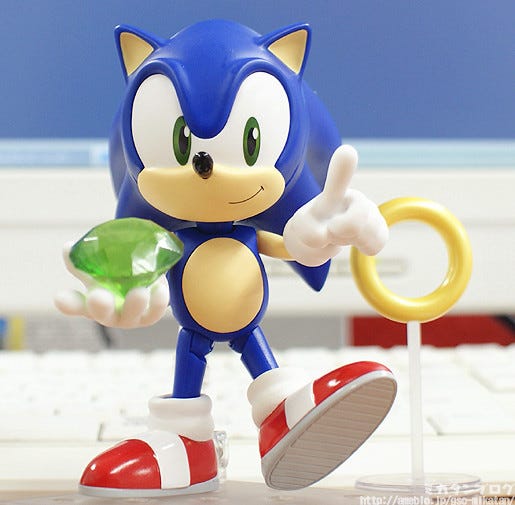 It’s a lot of fun to move Nendo Sonic around! 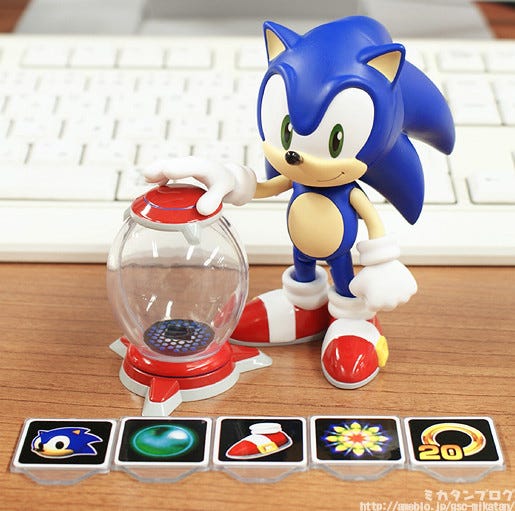 The box comes with five different items that can be obtained in the game – just open up the lip of the item box and place the one you want inside!

Plus as you can see, Sonic can stand up easily without the need for a stand! I love being able to stand figures by themselves! 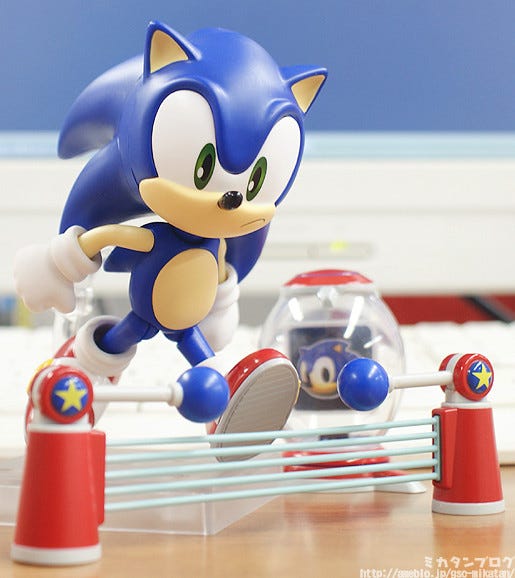 My favorite, the point marker!

Personally I think that this point marker is just as important to the image of Sonic as the rings! I always loved passing through these markers in the games :P

Now I can see him running through it right on my desk whenever I want to! 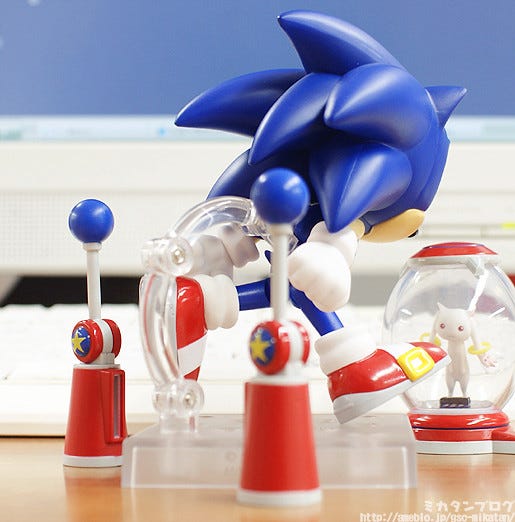 You can also display it after Sonic has run through!

The blue barrier can be removed and the blue balls can be moved up and down to display the point marker after Sonic has run through it! I’m sure fans will be glad to see the extra effort put into even the optional parts like this! 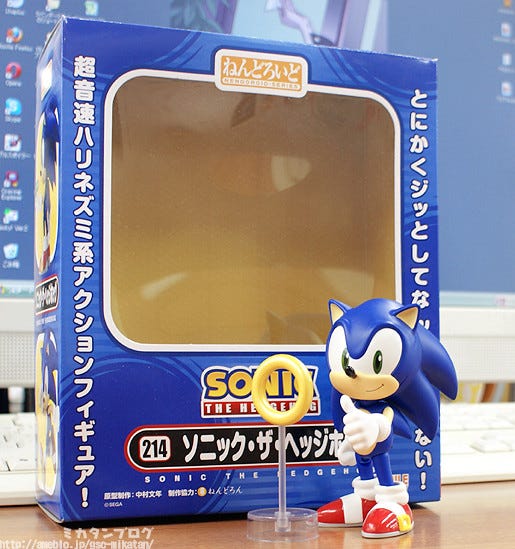 He’ll be shipped out from GSC from the 25th April! (`･ω･´)ゞ
If you have any preorder or sales queries, be sure to contact our partner shops!

– 10 Years of Good Smile Company : Nendoroids of the Past! –
There are only 13 days left until GSC turns 11 years old!

Let’s take a look at another Nendoroid of the Past! 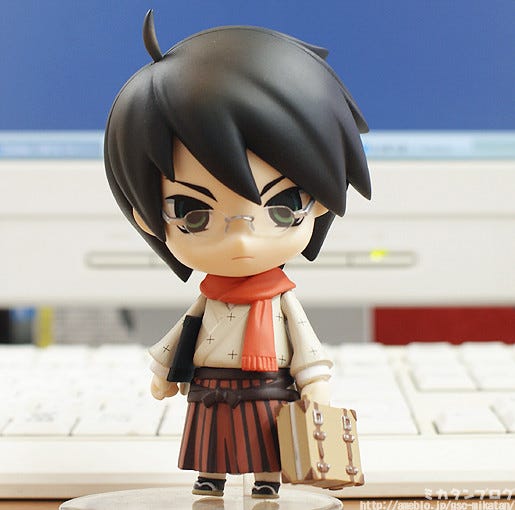 A Nendoroid that reminds everyone of cherry blossom season! I didn’t include it in the photos, but he also came with rope that could be placed around his neck – which posed quite some trouble for everyone involved in the project! :P 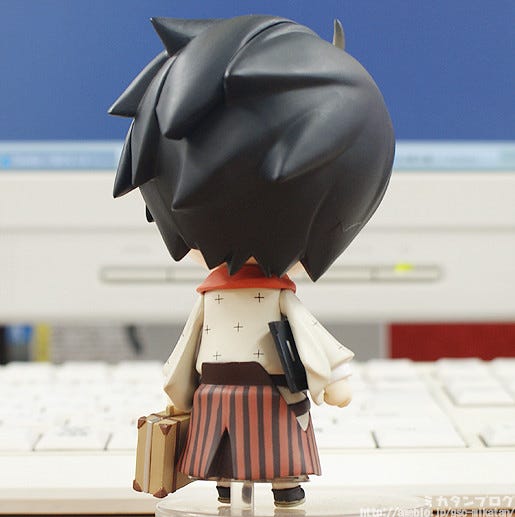 We actually went down to Matsudo Shrine and hung a rope on a cherry blossom tree in order to help recreate the hanging scene on the Nendoroid… I can’t believe we went through with that! :P

The other day I was out taking some outdoor photos of a different product, when a group of four people wearing school uniforms came by and started chatting with me… I’m glad that never happened while we were working with Zetsubou Sensei!