You already saw them yesterday… 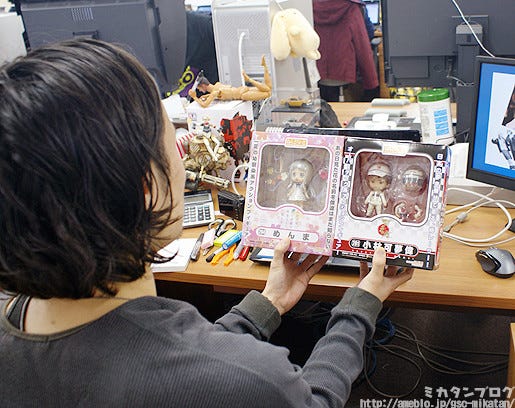 And you can grab these two from next week!

Miura from the production department was in charge of both of these Nendoroids! It must be so wonderful to finally meet the final versions of figures that you created! :P Let’s take a look how they came out… 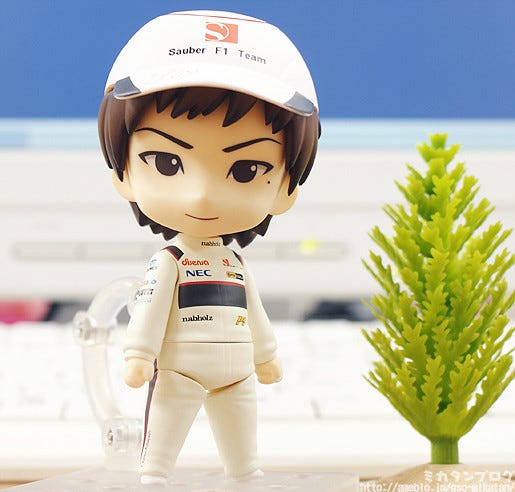 A Nendoroid of the F1 race driver with an impressive track record, Kamui Kobayashi! Even when shrunk down to Nendoroid size, the coloring and details on his helmet and racing suit have all been faithfully preserved based on their originals – even the sponsors names are included on his outfit.

He also comes with extra parts that allow you to display him either holding his helmet, or wearing it – however you’d prefer to display him! 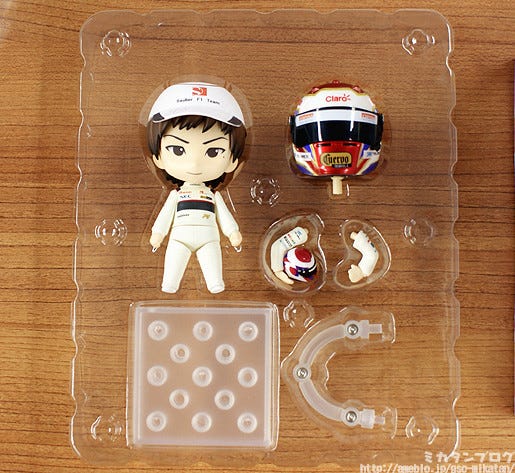 Although it is less parts than normal, a lot more effort went into getting the figure to represent Kamui as closely as possible! The helmet and racing suit are so incredibly detailed – it’s simply outstanding! 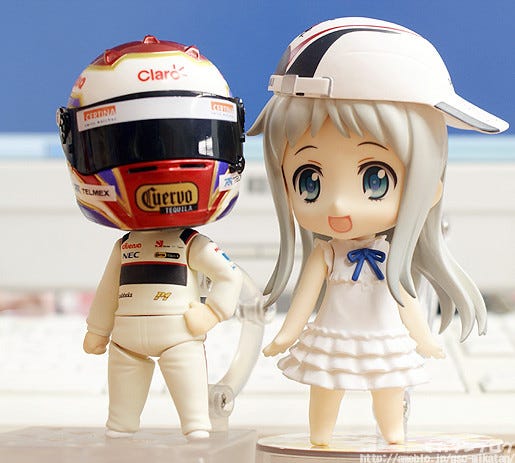 Here is is wearing his helmet!

The helmet of course doesn’t work like a normal expression- you just replace the entire head with the head wearing the helmet!

But Kamui’s head and expression can still be removed!

That means you can put the hat on other characters like this! (Although, I don’t think you’d be able to display Kamui without his hat, it looks a bit strange. ) 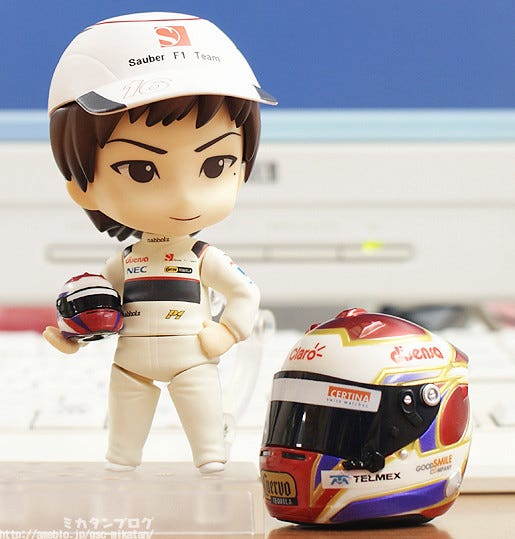 You can remove the joint to just display the helmet!

I can’t give you an exact number, but you should think very high! :P It’s supposed to just be a ‘deformed’ figure as a Nendoroid, but it really came out as a collectible miniature!!

Plus as you can see, there is a much smaller helmet held in Kamui’s arms so you can pose him like this instead. 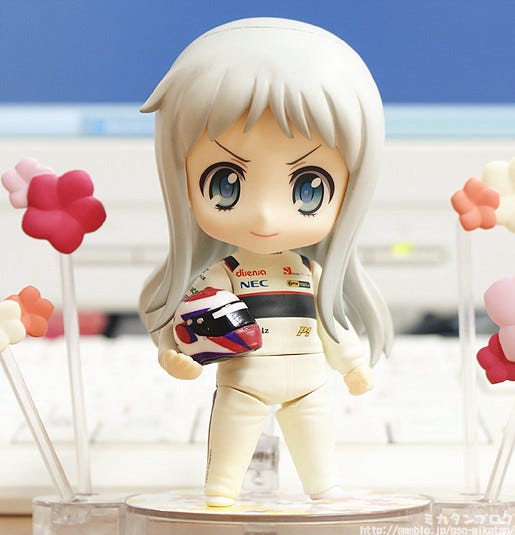 “Menma wants to race too!”

I swear I heard her say that the minute I put the racing suit on her! It’s so cute!! Kamui’s body is very different to the standard Nendoroid bodies, so it can be fun to place some different characters heads on it! 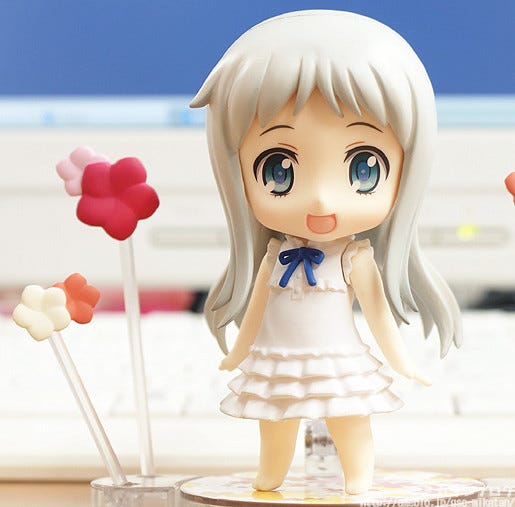 But anyway, let’s move onto the next Nendoroid…

She is from the anime series ‘Ano Hi Mita Hana no Namae o Bokutachi wa Mada Shiranai’! Her real name is Meiko Honma – but she is better known as Menma – the lively, friendly member of the ‘Super Peace Busters’.

She comes with a variety of optional parts, including Menma’s diary filled with her memories and thoughts of all her friends, as well as some of her steamed bread – a very important part of the story! 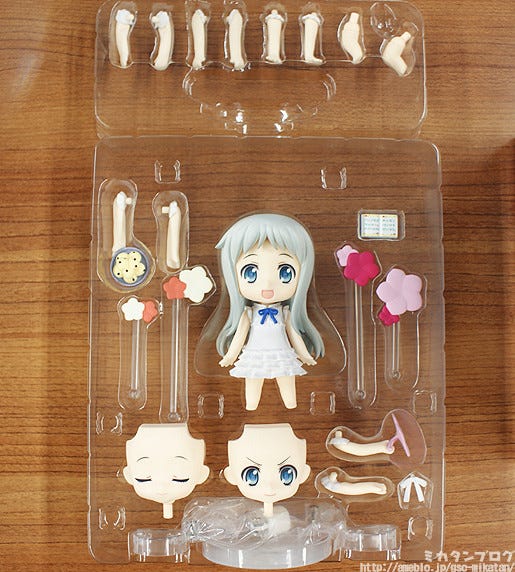 She comes with a huge variety of parts to play with! Shuu-chan was in charge of the planning for this figure… and you can really see his love for the series went into it! There are even extra parts to recreate the colorful scenes in the opening and ending themes of the series! 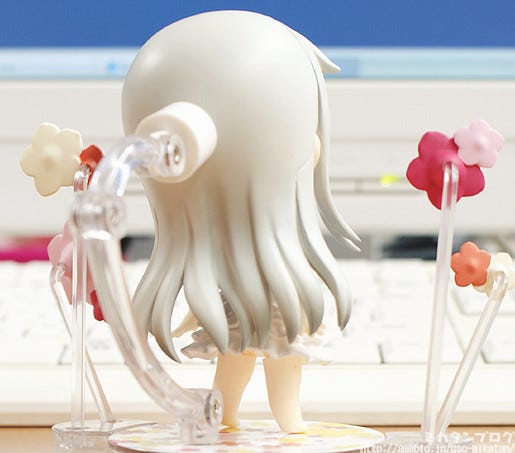 She makes use of a magnetic stand!

The other types of stands limited her posability too much, so in the end she got a magnetic stand! Personally I really love the magnetic stands! I put a little bit of tissue between the magnet and her hair to make sure that no damage is made to the figure. (You probably don’t need to, but I like to be safe!) 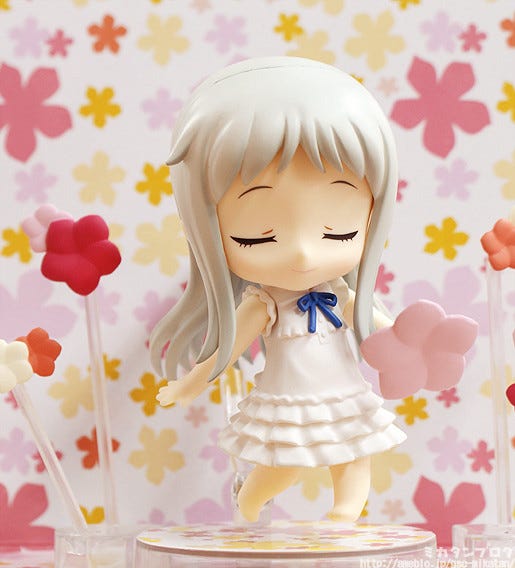 The background of the box is beautiful!

This is the inside of Menma’s box! You can take it out and use it as a display background like this! Doesn’t it make Menma look absolutely lovely?! The parts on the sides also help to recreate the ED theme, so together they create a really stunning scene! 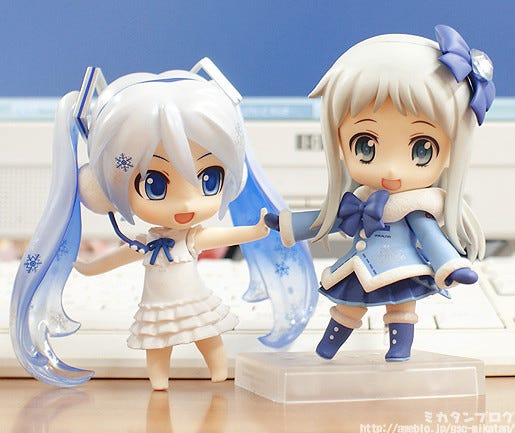 Menma is well known for her white one piece, but have you ever wondered how she would look wearing something else? That’s what Nendoroids are for! There isn’t really space for Miku’s blue ribbon, but I just stuck it in between the opening between the front and back hair parts. It leaves a little opening along the line, but for photos from a distance like this it doesn’t stand out too much! 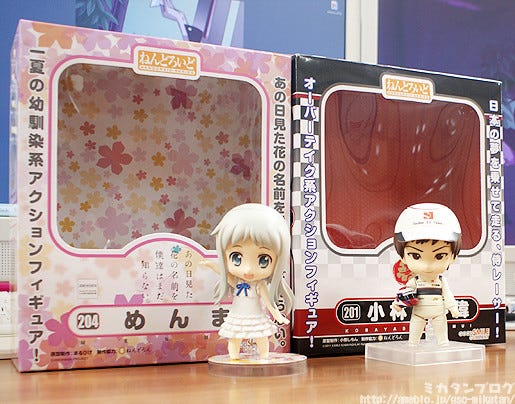 If you have any order or sales inquiries, please contact our partner shops!

Plus! I know it’s sudden, but…

We’re having a photo contest!

The details will be put up on the GSC website and the blog at a later stage! It’s your chance to get hold of a super-rare item! :P