The GSC Offices after an event! 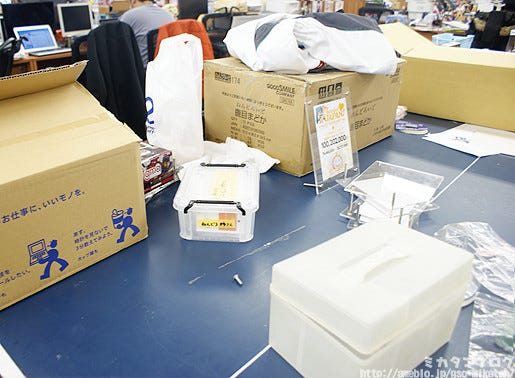 Our battle has only just begun!

But even with WonFes past us, we still have lots of events planned in March and April! The table tennis table doesn’t look like it’s going to be usable any time soon…. 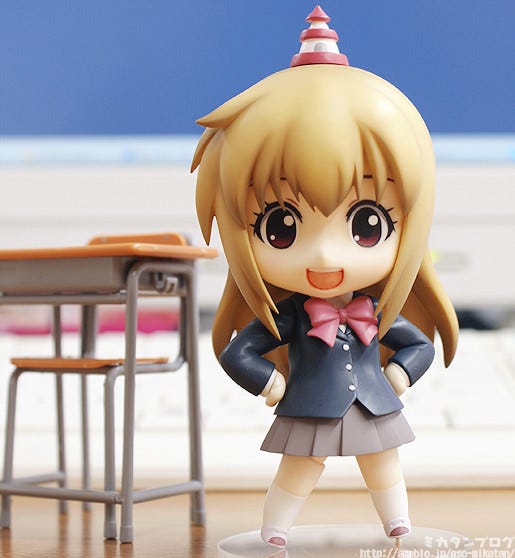 But anyway… today we’ll be looking at this upcoming Nendoroid!

From the Young Gangan manga series, ‘+TIC ELDER SISTER’ came an anime series, and now a Nendoroid as well! The anime was aired online, but is now being released on BD/DVD. This Nendoroid will be included with the BD/DVD!

You can still watch the series at the Young Gangan website!

It’s a real surreal series… definitely one I recommend! The long-awaited episode 4 is half loved by everyone here at GSC, and half not… personally I loved it! The third episode was painful, but I still loved it! It’s really interesting! 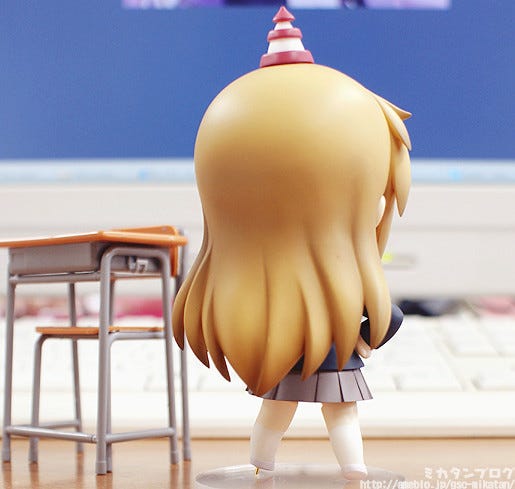 The model castle she wears on her head to show she is the head of the model club is easily visible from behind.  The other members also have models like this on their heads, but I really don’t know why. :P 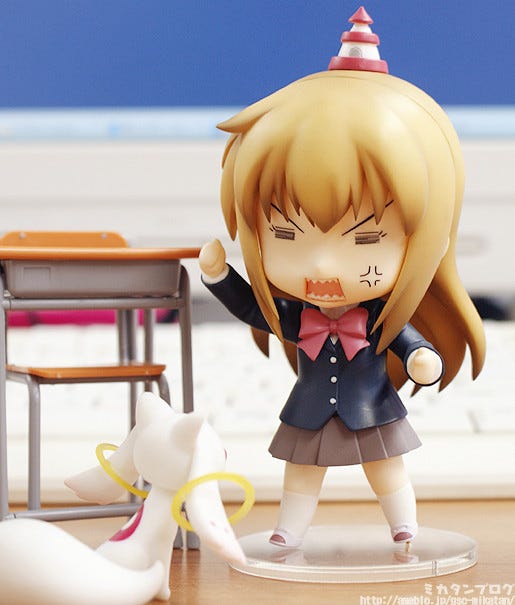 She looks really upset! :P This expression could easily be used on so many other Nendoroids as well! I’ll play around with a bit more later!

She also comes with an arm and clenched fist to compliment the expression!
The combination makes a really angry looking Nee-san! 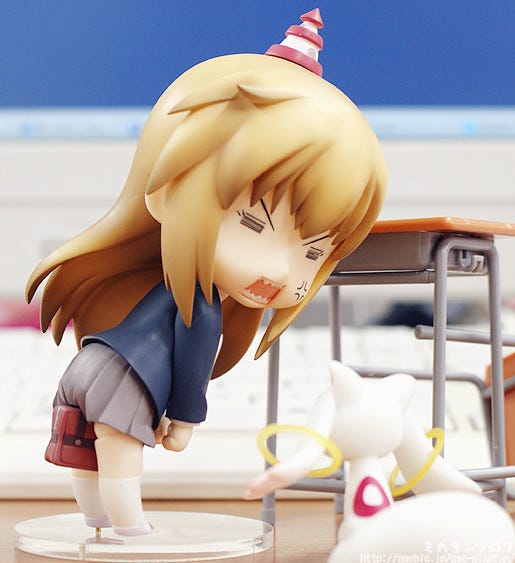 Stretched out arms and the ‘Olaolaolaola’ pose

Which, to explain briefly, is to put your bag between your thighs and then shake your bottom. Although, I’m sure many might be wondering WHY one would do this. :P

If you really want to know, go watch episode 2! 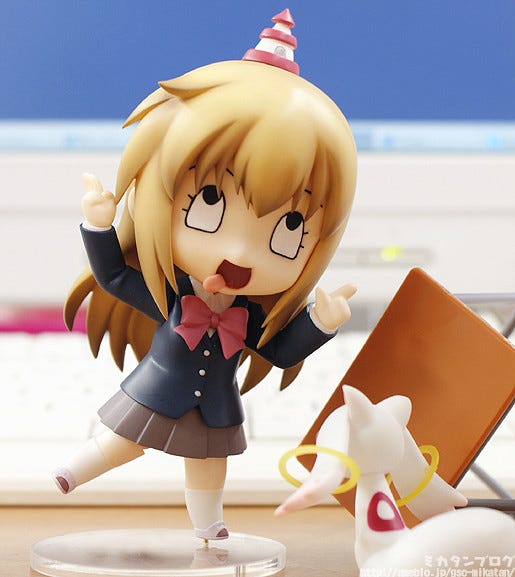 Next up is this colorful expression!

To explain briefly… I have no idea how to explain this! xD

Watch episode 3 of the anime!

I think the easiest way to put it, is that this expression emcompasses all of Nee-san’s annoying personality all together! The two hands actually each have a slightly different pose left and right, which is a nice little extra!

…and you’re not allowed to use this as an ahegao face! :P 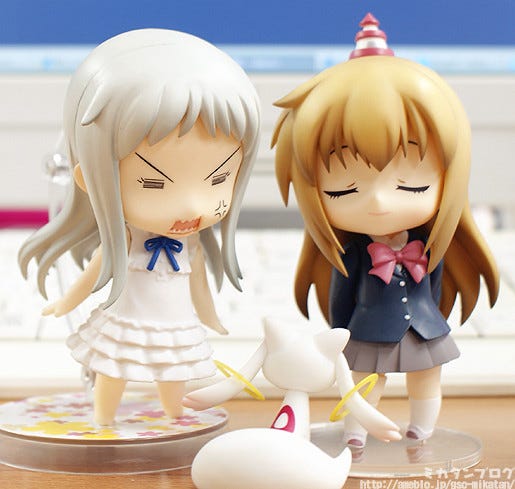 Oooh! Nee-san looks so relaxed with Menma’s closed-eyes expression! Plus, as I expected, the angry expression suits other Nendoroids well. Menma even look cute when she is angry! 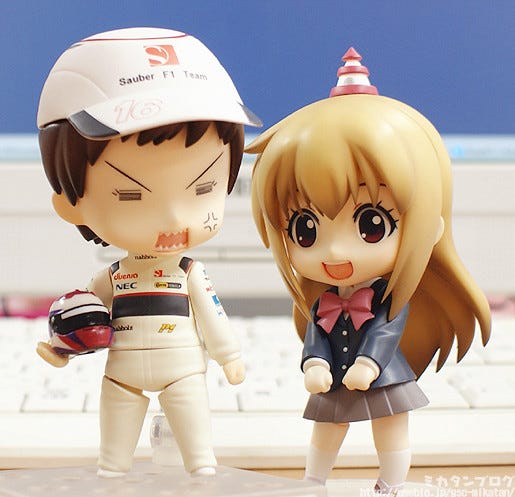 I was going to put Kamui’s expression on Nee-san as well… but I eventually came to the conclusion that may cause some problems… (in fact, just putting the upset face on Kamui might cause problems :P) 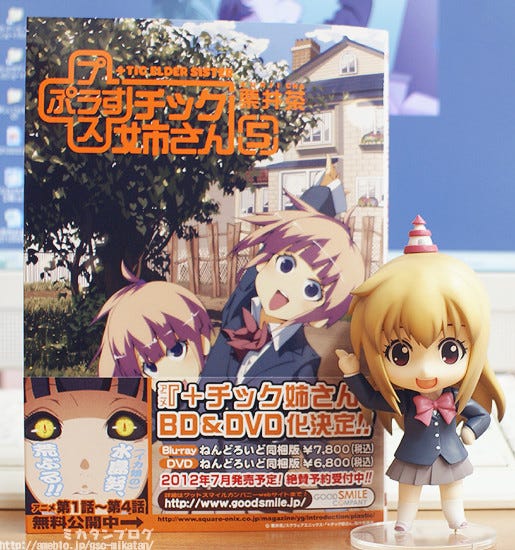 The Nendoroid is even advertised on the band around the manga! ^^


She’ll be on the GSC website on the 24th!
She will be a bonus with the +TIC ELDER SISTER BD/DVD!

Head over to one of our partner shops and preorder your copy of the BD/DVD!