The woosers are guarding something! 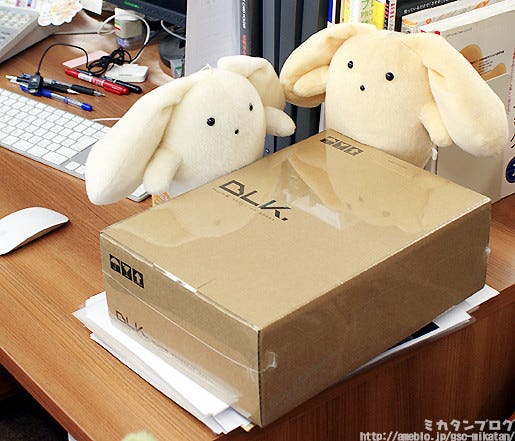 … actually it’s a sample that was sent during his development. It’s a super rare one-of-a-kind wooser! But I can easily defeat him and take the treasure he is guarding!! 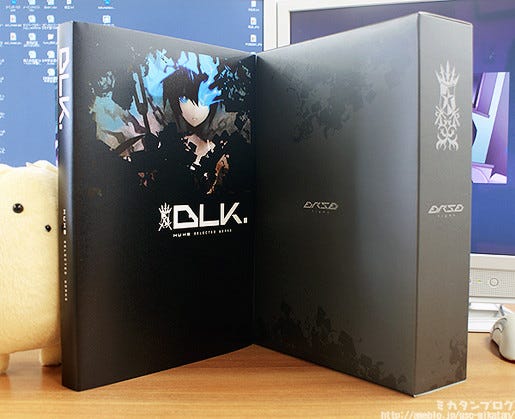 Today we’ll be playing with this lovely looking product!

This is the limited edition, but the illustrations are the same in the standard version!
The left side of the picture above is the artbook, while the right is the figma! 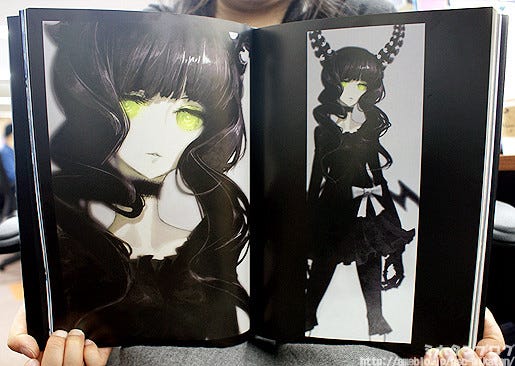 Let’s take a little look inside the artbook!

It really is absolutely humongous! It’s got the whole history of huke’s career drawn inside it! 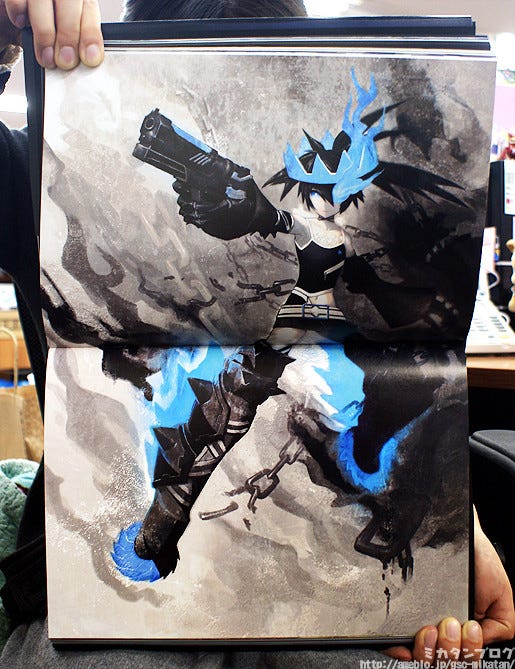 The figma included with the limited edition is of course this BRSB-chan!
The last ‘B’ in BRSB is for ‘Beast’! (For those who didn’t know :P) 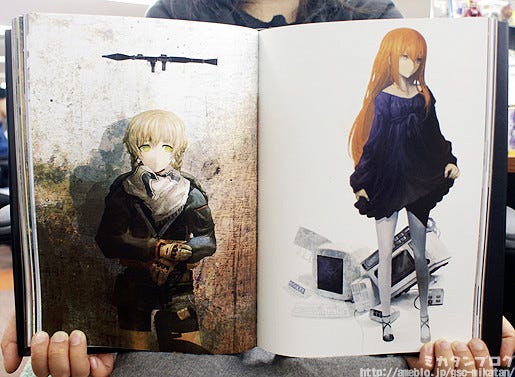 There are lots of illustrations from Steins;Gate, as it is one of the projects huke worked on!

So many of the characters in all sorts of poses and outfits all included as beautiful illustrations in the book! Definitely a artbook that Steins;Gate fans will enjoy! 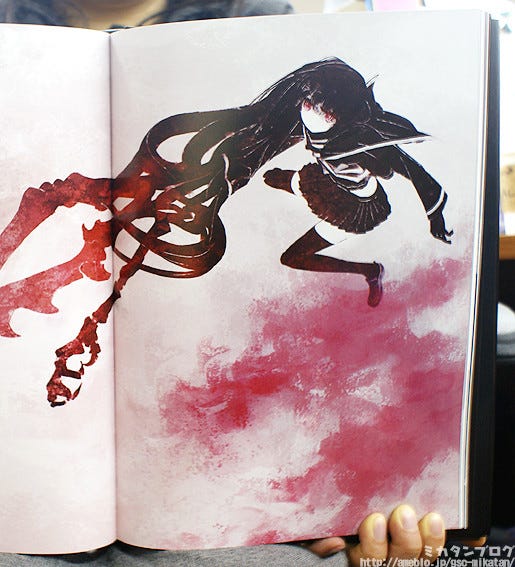 There are also original illustrations!

Look at that lovely sailor uniform! When I saw it first I got goosebumps… I really fell in love with this illustration! huke is well known for his unique textures in his illustrations… it really gives a lovely fresh feeling to his illustrations! (plus it’s beautiful!) 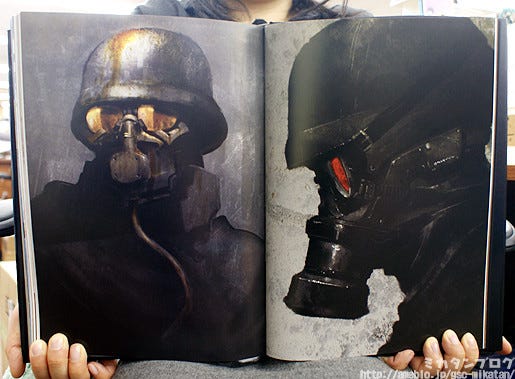 Some more serious illustrations as well! 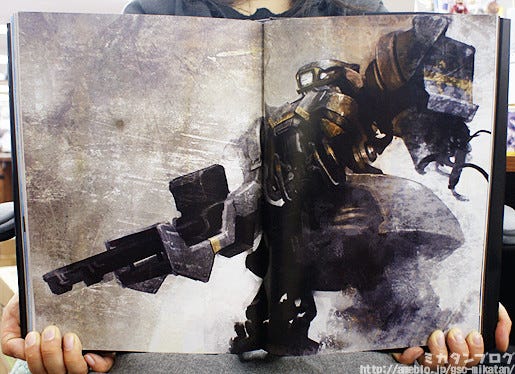 I really don’t know much about robots myself, but I still really thought this one looked awesome when I first saw it… I really think highly of anyone who can come up with such incredible designs!

The artbook has been made using the finest quality of paper and all under the watchful eye of huke himself to make sure it comes out just as it should! It really came out nicely, so if you’re a fan of his work do consider grabbing the artbook to bring a piece of huke’s world into your life! The price is very reasonable when you see just how huge the book is – I think it would also make a great present for a friend!!

Alright, let’s move onto the limited edition’s figma now!
The figma is amazing, and very detailed! 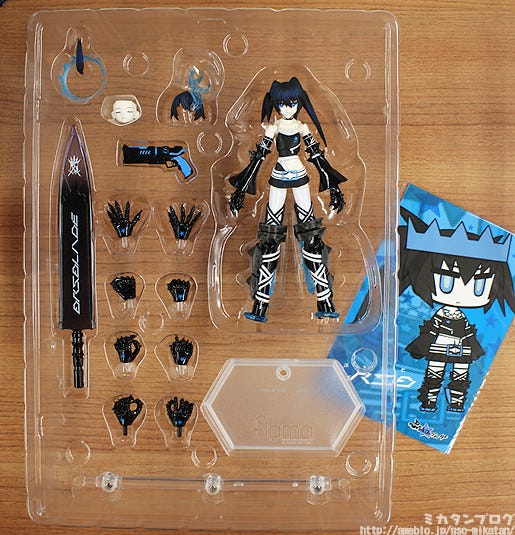 It might looks a little small at first – but remember this blister pack is the same size of the artbook! It’s much, much bigger than the normal figma box! It also comes with a very cute little postcard illustrated by CHANxCO! 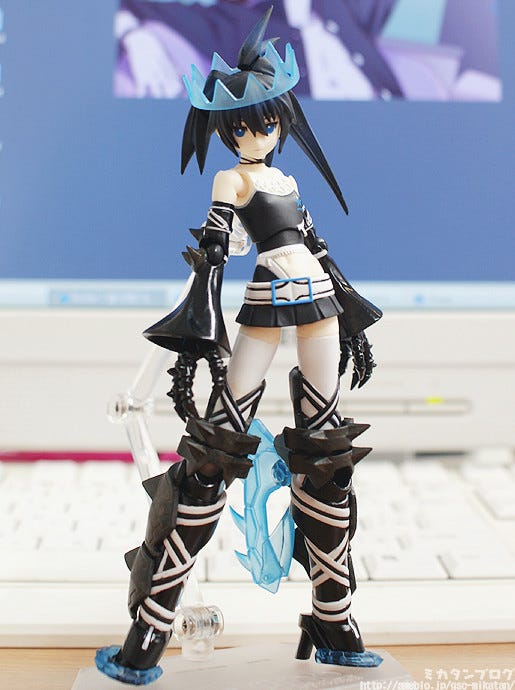 The Black★Rock Shooter BEAST figma is only included with the limited edition of the BLK artbook! If you scroll back up you’ll see the original illustration that the figma is based on – it really came out wonderfully! When you actually hold her for yourself you’ll feel just how sharp all those spiky parts are!! You actually need to be careful when changing parts around as they can actually hurt you! :O

Her giant sword, the BRS Blade!

Here she is posed with her sword in a battle pose, ready for a fight! figmas are really great as they allow you to take almost any poses!! I particularly feel like huke’s designs fit the figma franchise really well – they pose so easily and look great every time! 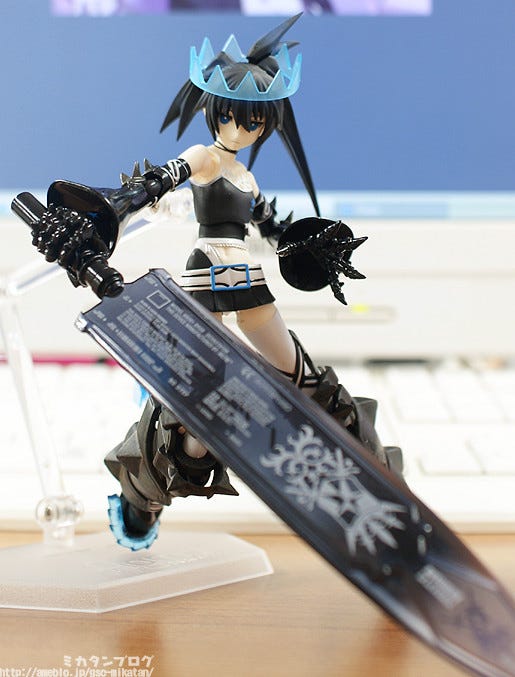 The reverse side of the BRS Blade!

The reverse side of the blade has incredibly intricate letters and patterns all over it. It’s also made from slightly clear plastic – if you look carefully you can see her leg behind the sword in this photo! 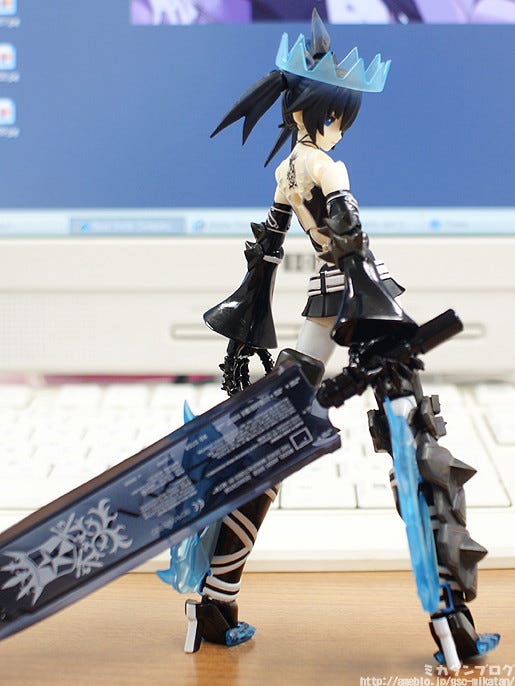 She can stand without the base!

Although she is a little bit unstable posed without the stand – just look how awesome she looks!! :) Even as a posable figure the body-line is absolutely fantastic! 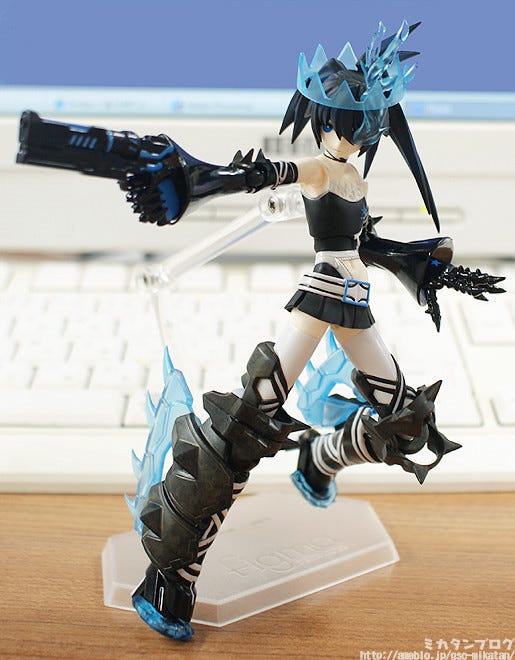 I had a go at recreating the pose from the illustration! The gun is fairly small, but even so the paint work and sculpting is fantastic!
She also has an extra fringe part to add the blue flame over her eye! 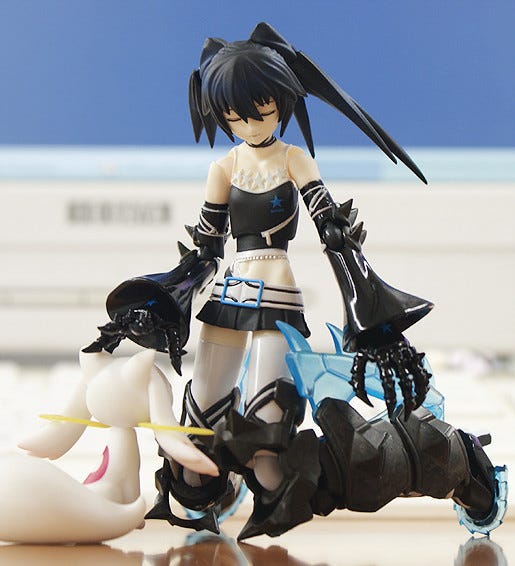 A face with closed eyes is also included!

The blue crown on her head can also be removed, but it will leave some bumps where it should connect – you can’t really see them unless you’re looking very carefully though. She looks just fine without the crown, as you can see in the above picture.

What I want to point your attention to is her collarbone and pelvis!
That bare skin gives off a lovely sexy side to the figma as well! 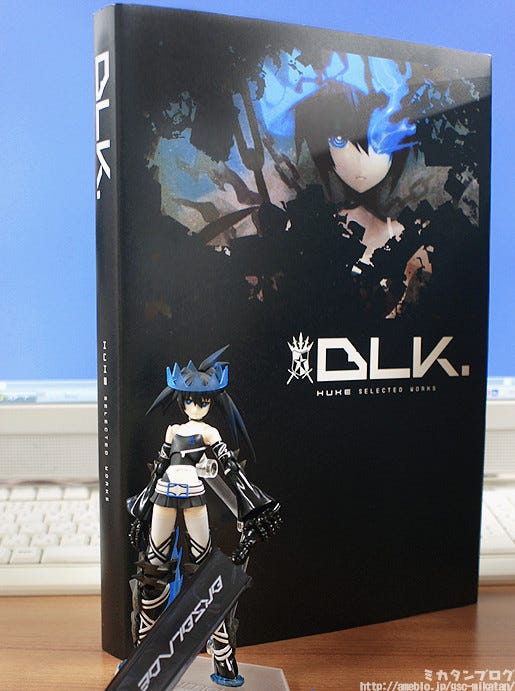 For any order or sales inquiries, please get in contact with out partner shops!