What is Kyubey playing with here…? 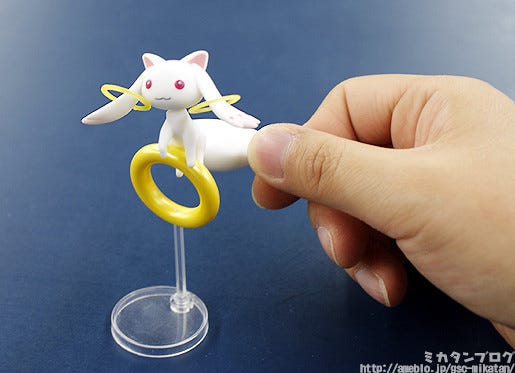 Any gamers should be able to recognize it!
It comes with this character and is a very important part of the game he is from!! 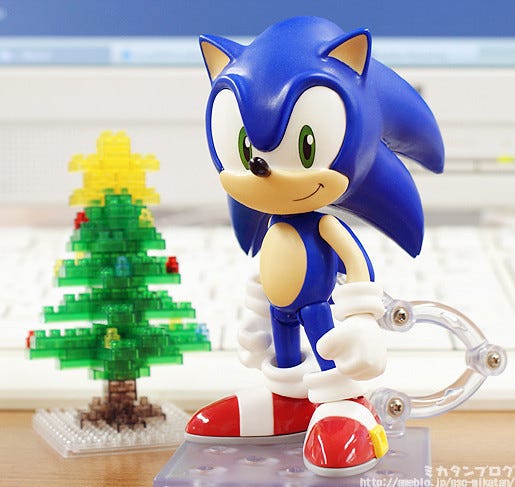 The Sonic series has just reached it’s 20th anniversary, and from that series comes a Nendoroid of the super fast hedgehog himself – Sonic!

That’s right! Sega’s famous Sonic the Hedgehog has been around for 20 years! ヾ(*ﾟωﾟ)ノ゜

It’s the second Nendoroid of a popular worldwide known character, following on from Disney’s Mickey Mouse! Isn’t it great to see the characters of our childhood still getting the chance to become Nendoroids! Let’s take a closer look! 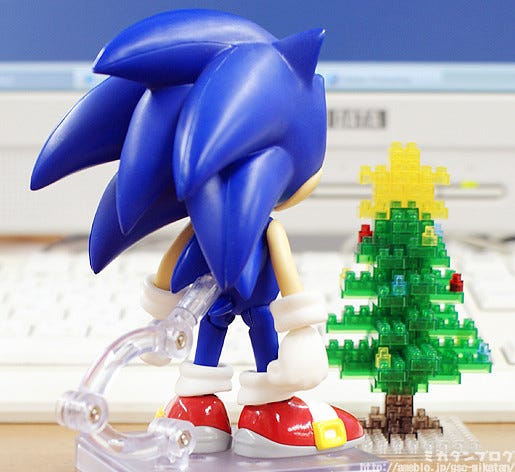 As you’d expect from a hedgehog, Sonic has a lovely spiky back! His stylish red shoes are painted with a glossy cover for a nice shiny effect! 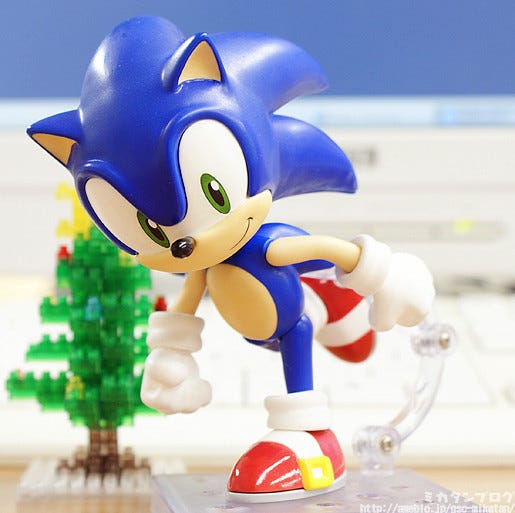 Running at the speed of sound!

He comes with an optional bent right leg!
The picture here kind of hides it behind him a bit, sorry! But it still gives a good feeling for the running pose!! 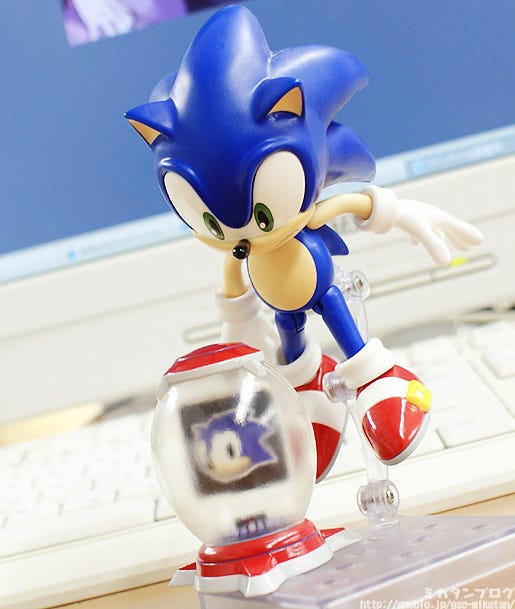 He also comes with a more serious expression!

It is a Nendoroid after all! Of course he comes with an extra expression to play with!  This expression is for the more pressing times, and gives him a slightly worried and more serious look.

He also has open hands and an item box!
There are in fact a load of extra hand parts to help you recreate all sorts of scenes from the game!

There is also an item box, which has a lovely extra life inside it… but… 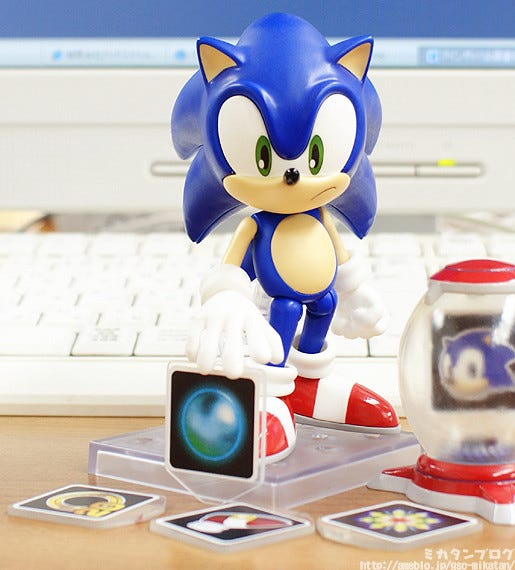 You can also change the items inside!

You can take apart the item box and put whatever item you’d like to see inside! I think the 20 rings looks best! 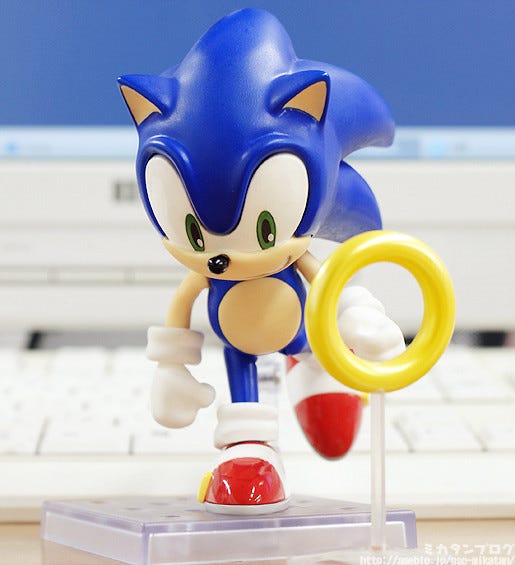 He also comes with a ring to collect!

It would be fun to line lots in front of him to collect, or even have them scattered around as if an enemy had just hit him. Unfortunately he only comes with one ring. ^^; 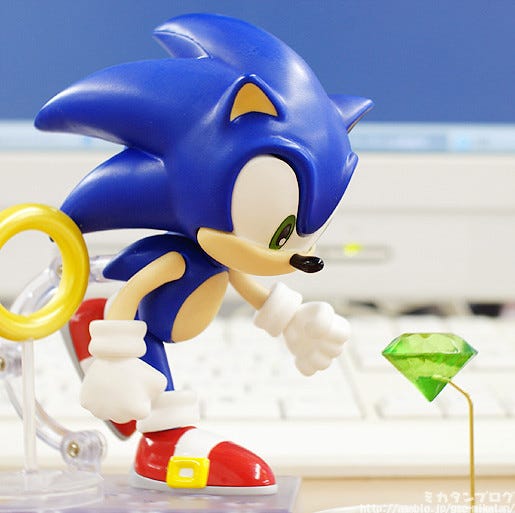 The chaos emeralds are the powerful gems that Sonic runs around collecting! As you can see it is made from beatiful clear plastic and even comes with its very own little stand! (The photos here show it held by a brass wire, but the final version will have a proper stand.) 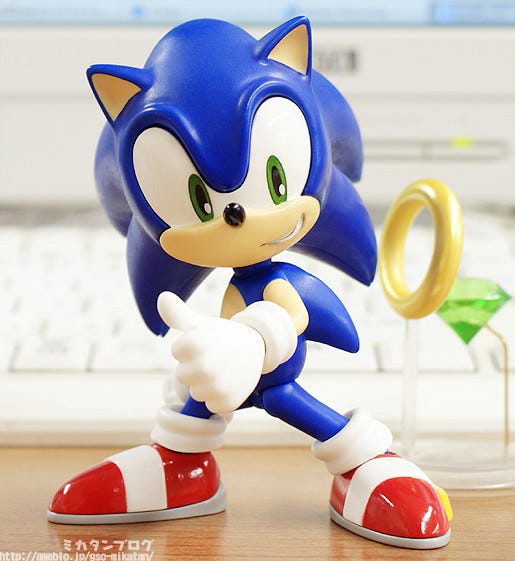 A grinning smile and a thumbs up hand!

That smile suits Sonic so well – always running around doing whatever he likes! The thumbs up hand can be used with the bent left arm to create this confident looking pose! 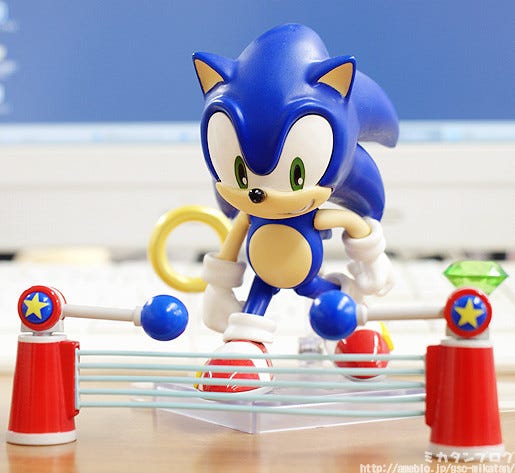 He also comes with a half-way marker!

The half-way markers that saved you having to redo the whole level after dying! Those who play Sonic should feel quite relieved to see this along with the Nendoroid. ^^ 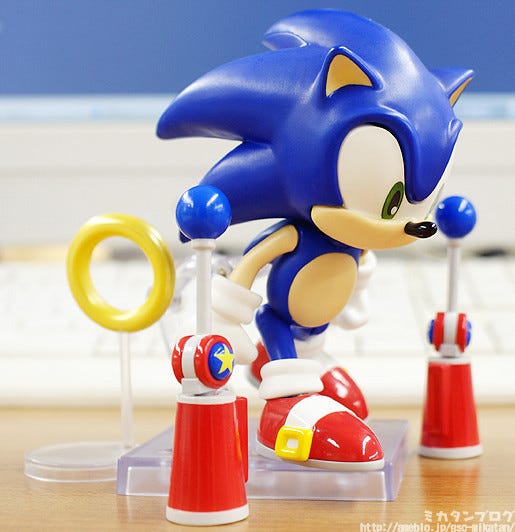 The blue barrier section can be removed!

The blue balls on the top can also be rotated around, allowing you to pose them upward as if Sonic has run through the point! 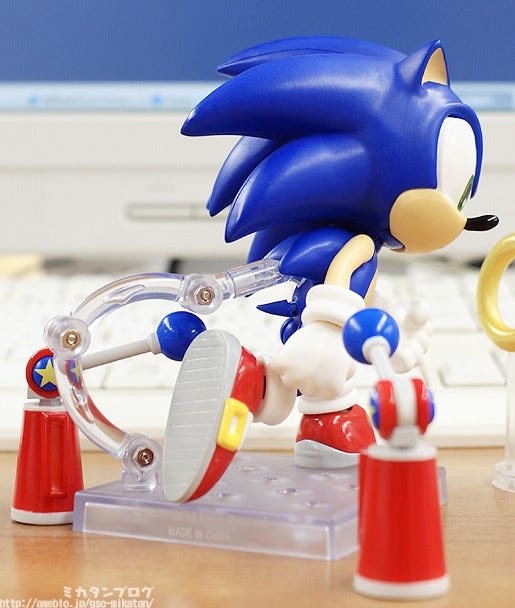 You can pose him dashing through it!

It’s definitely a Nendoroid that comes with a load of fun ways to play around! So many optional parts to have fun with and strike your favorite poses.

He’ll be on the GSC from tomorrow!
Be sure to check with out partner shops for any preorder or sales info.

And speaking of tomorrow…
Sonic Generations is also going on sale!

For more info check out this site:
http://sonic.sega.jp/SonicGenerations/

Congratulations on 20 years, Sonic! I love you SEGA!

A brand new wind-instrument magazine for teens, based on Hiroshi Yamamoto’s novel, ‘Einsatz’ is on sale as of today! 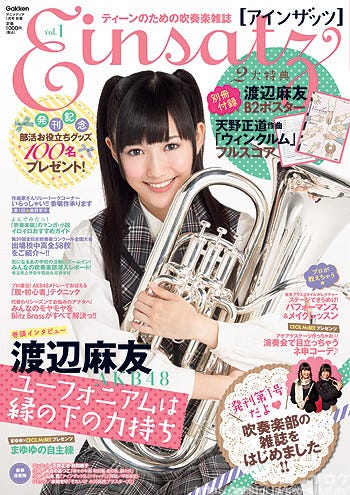 The front cover is AKB48’s Mayuyu! As cute as ever!  There were all sorts of articles that I took a look at like “Learn from the Pros”, “The Secrets of the Cords”,  “CECIL McBEE Presents” and “How to Create a Thrilling Stage”.