Thanks to everyone who watched last week’s broadcast!

We tried screening in high quality this time around, but experienced some volume troubles – sorry for those who struggled to hear the show! 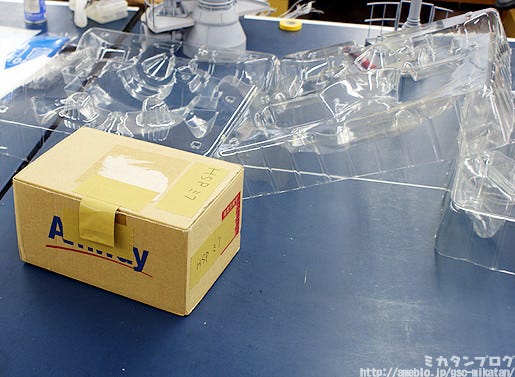 After the broadcast, I asked to borrow one of the prototypes!

It’s time for a much needed prototype figure review! 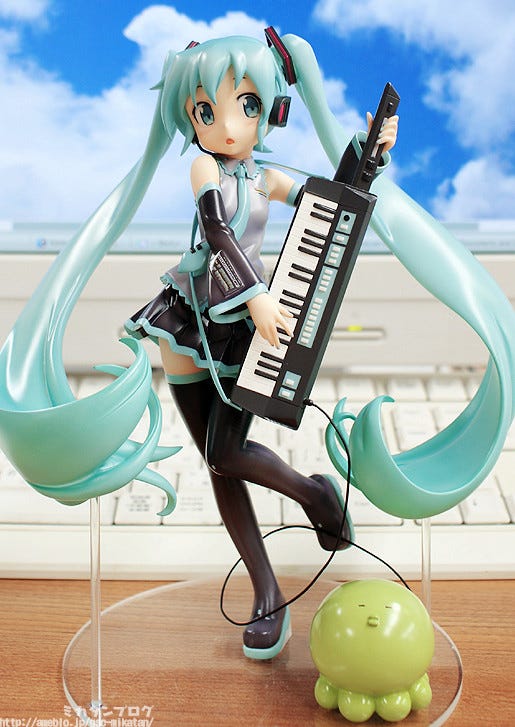 A figure of the popular version of Miku that is used in Hana Soumen-P’s Miku videos, illustrated by Hiro Kanzaki!

First look at the photo above… then compare! 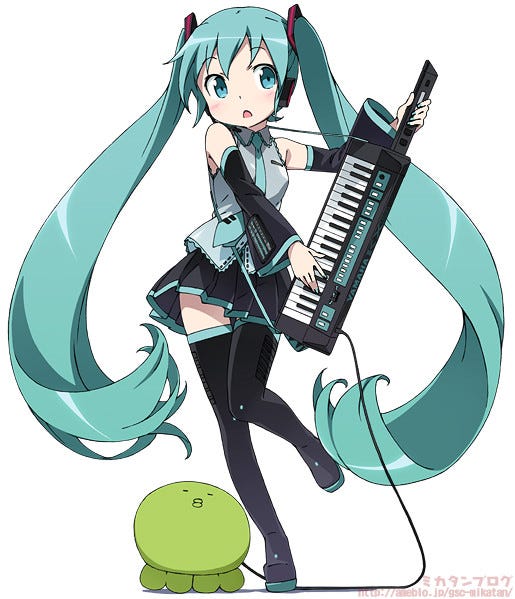 This is Kanzaki’s original illustration!

As expected of Max Factory’s wonderful quality! The figure looks almost identical to the illustration!! The illustration has a loli feeling to it that has been converted into figure form wonderfully! I can’t wait to take more photos! (`･ω･´)ゞ

This version of the illustration was drawn specially for the figure!! Yay! 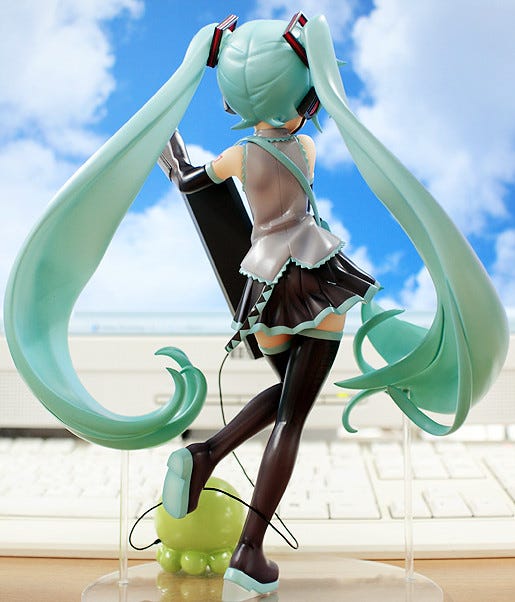 This is how she looks from the back!!

The balance between her body and her head really really adorable, and the way the hair bends inward at the end just makes it even cuter! 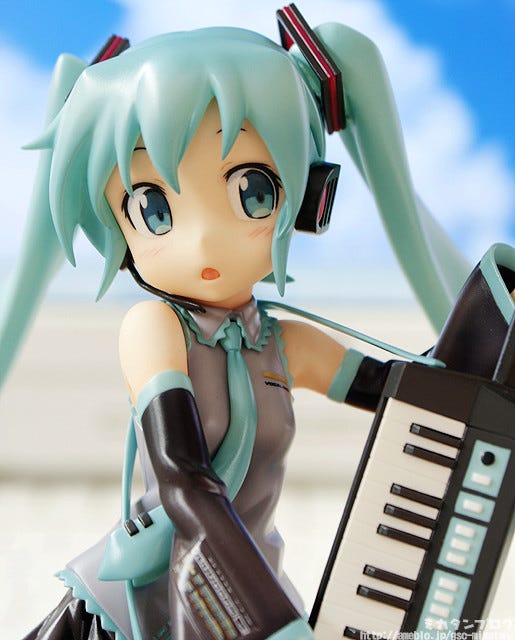 Well of course she is! It’s Kanzaki’s Miku-san!!

Aaah!! I wish she was real so I could touch those squishy looking cheeks! Even the transparent looking eyes have been perfectly recreated on the figure version! 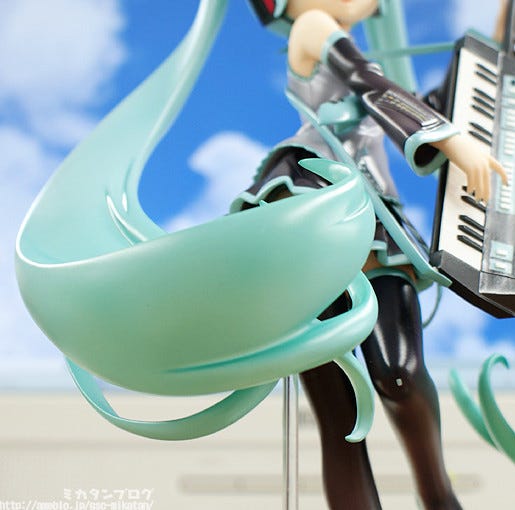 Look at that exquisite hair color! 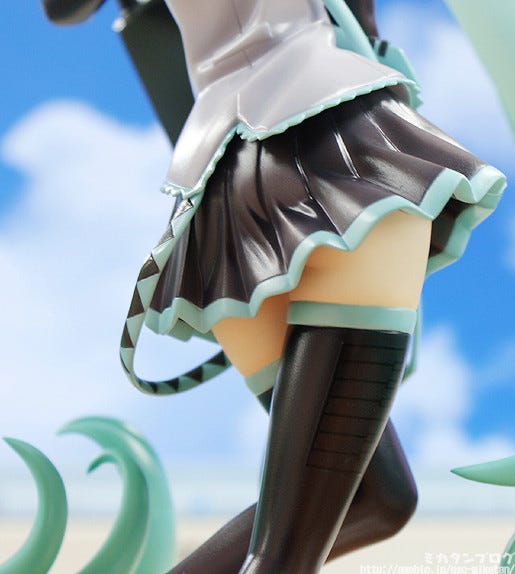 It’s not really an overly active pose, but just like the illustration, the smallest areas like the fluttering of the skirt still have a lovely dynamic feeling to them!! Small things like this are really what makes the figure come together in the end! The subtle little pattern on her boots are also a lovely little bonus to notice! 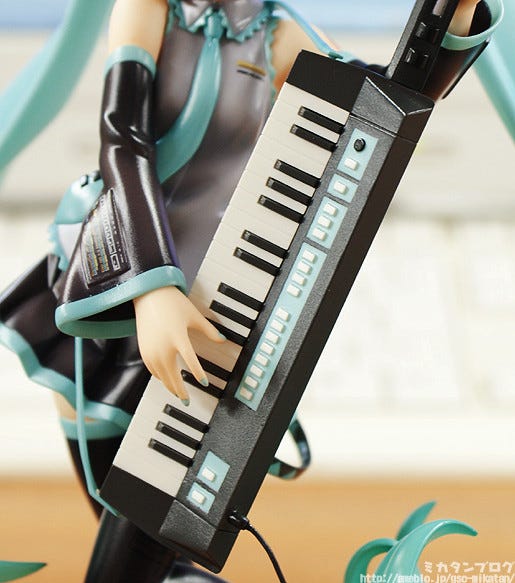 A close-up on the keyboard!

The texture even changes between the buttons and the keyboard! Such fine detail!! I must say that her hand also looks so soft and touchable here… (*ﾟ∀ﾟ)=3 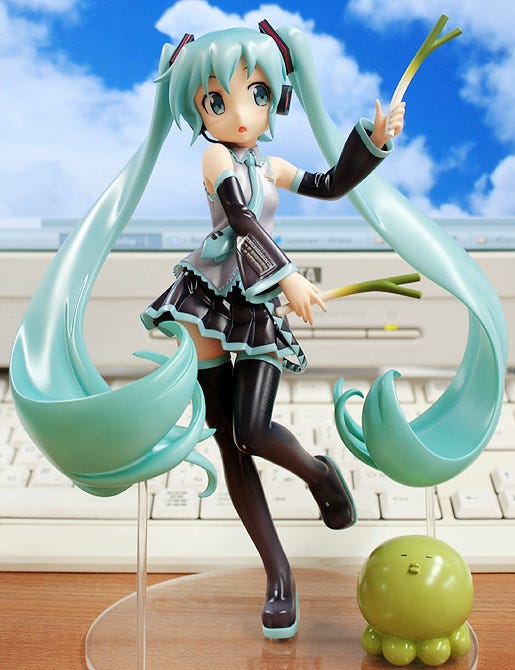 The keyboard can be removed!

Though that alone seemed kind of lonely, so I gave her some leeks to hold! :P The leeks come with figma Miku, and are not included with this figure. I needed double-sided tape to keep them in place! 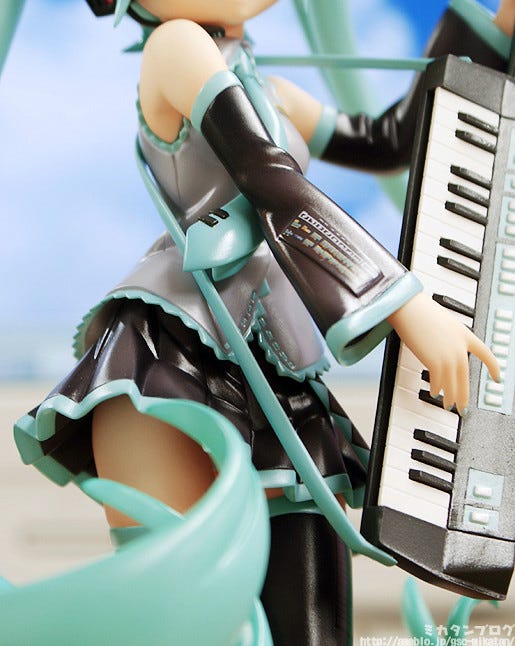 This has to be my best angle to look at her from! This picture has all my heart and soul poured into it, so I hope you like it as much as I do! :P！

The strange green creature that sometimes appeared in Oreimo as well is also included! I’ve heard that this creature is in fact Kanzaki-san himself!!? This time it seems he is acting as the sound source for the keyboard this time around! :P

She’ll be on the GSC site tomorrow!
For preorder and sales info, be sure to get in contact with our partner shops!