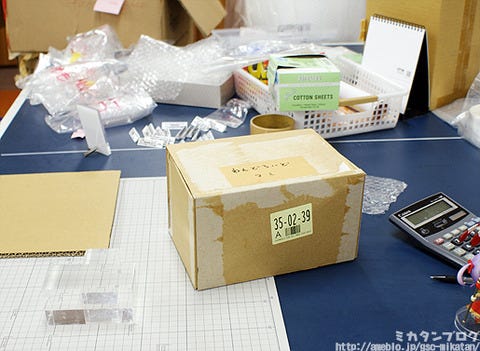 The event preparations are all taking place on the table tennis table found in the middle of the GSC office.

That is also where I found this figure!!

I gave a few sneak peeks on twitter yesterday, but now I’ll give her the proper look she deserves! :P 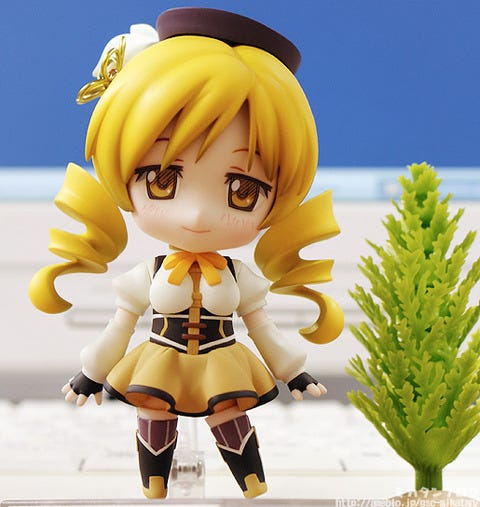 Mami is from the popular anime ‘Puella Magi Madoka Magica’, who is a third year student at Madoka’s school.

She is the third figure from Madoka Magica, following on from Madoka and Homuhomu! I know I shouldn’t say this about Good Smile Company figures that come out of, but…
She is absolutely perfect!!  (*ﾟ∀ﾟ)=3 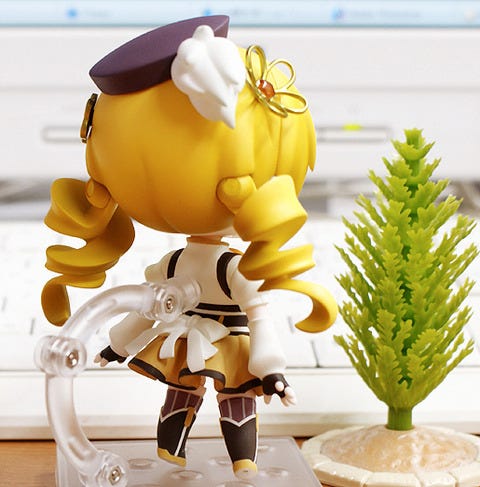 This is how she looks from back!

You can see her twin tail hair has Nendoroid joints!

This means you can pose them far apart or close in for all sorts of dynamic poses! Also note the flower accessory in her hair – it’s so small, but the the middle of it is made using clear plastic which makes it look really pretty! 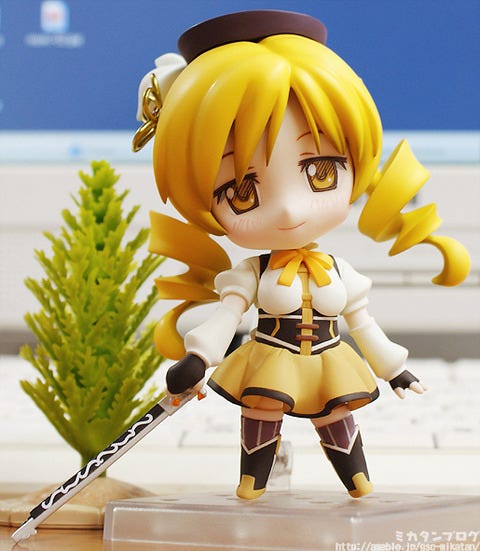 You can’t have a Nendoroid without loads of optional parts! :P

First up is her musket!

Mami’s weapon of choice has been shrunk into Nendoroid form, but keeps all it’s finer details! Of course she comes with the hands to hold it as well!

I’m fairly certain there are a number of you that thought that! And you’re right!
There is no way she could only have just one musket! 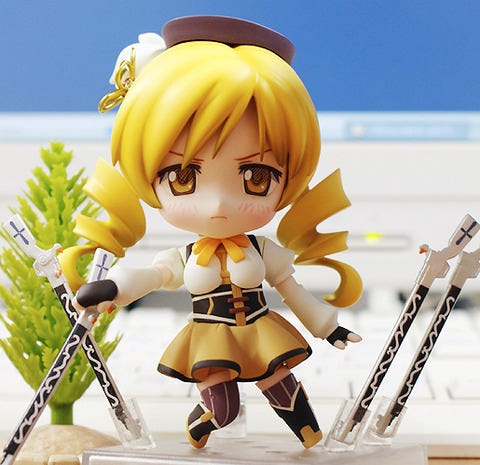 She comes with a total of four!

Little holsters that stick into the stand made of clear plastic are also included so she can have them all around her, ready to fire!

Plus her first extra expression – an angry face!

It might be angry, but it’s still so cute!! 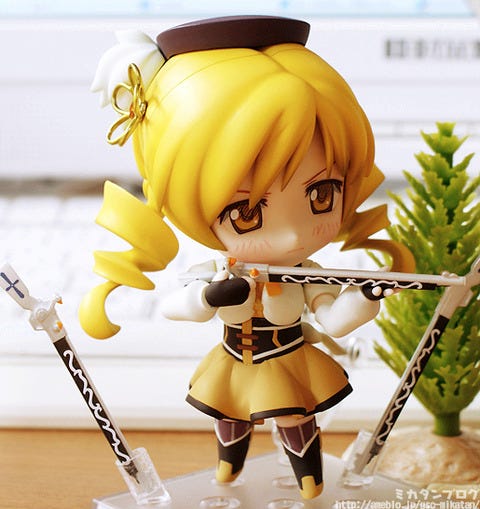 She can also be posed shooting the guns!

Perfect for posing her in combat scenes – two bent arms allow her to be posed like this! The shoulder, upper arm and wrist are all posable  allowing for all kinds of posing! 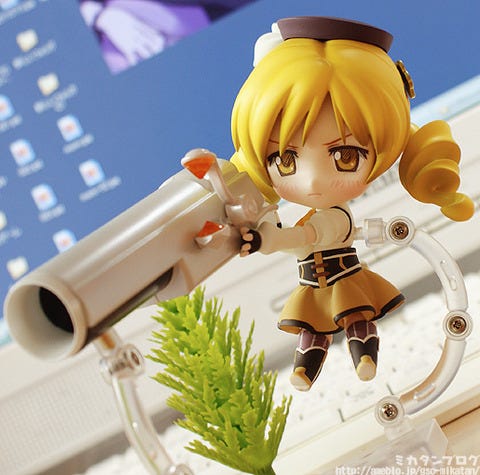 On this master figure the triggers (the orange bits) are also posable! I wonder if the the final figure will also be…! I hope so!! 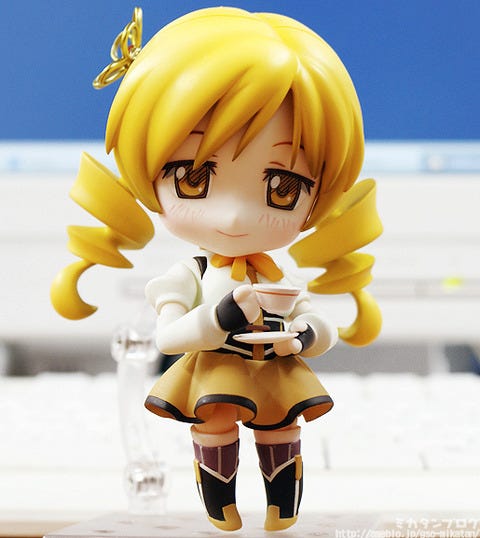 Mami-san has to have her tea set!

A cup and saucer filled with tea and arms to hold them! It goes with her smiling expression perfectly!

Plus as you can see – her hat is removable!
I hope the final version of the figure keeps all these removable parts! 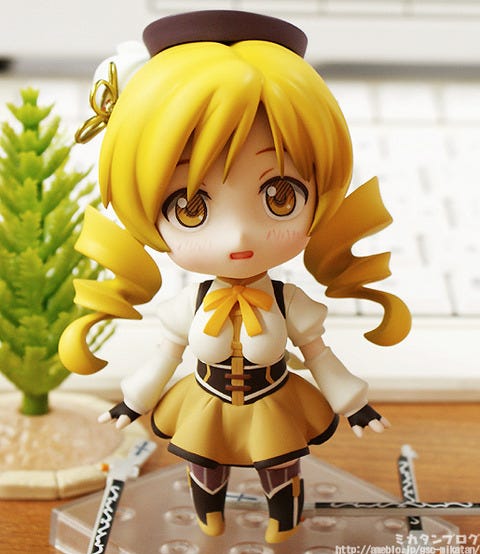 Her other expression – a despairing face! 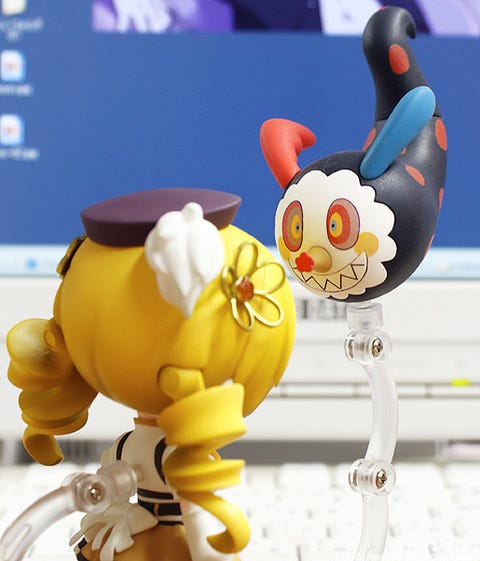 The candy witch is also included!

It also comes with an extra arm stand to pose it in the air like this! Mami really comes with an incredible amount of optional parts!

You can also see a review of figma Homura Akemi over at the figma blog!
The weapon parts that I really wanted are included with her!


* Please note that this blog’s contents is originally written for a Japanese audience and is then translated for our foreign customers. All pre-order and release dates are the Japanese dates. Also note that not all products can be sold in certain areas.