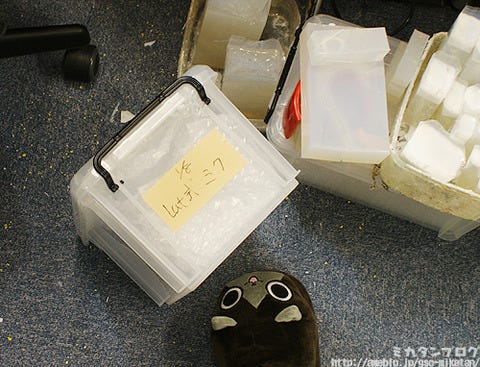 Have found a new figure!! (ﾟ∀ﾟ)ﾉ

It’s the Lat-type Miku-san we saw last week in Sapporo! She came home to the GSC offices… although I couldn’t find her for ages… for some reason she was on the 6th floor where all the sculpting takes place… at least I found her!

Good slippers! Bring the figure to my desk now! 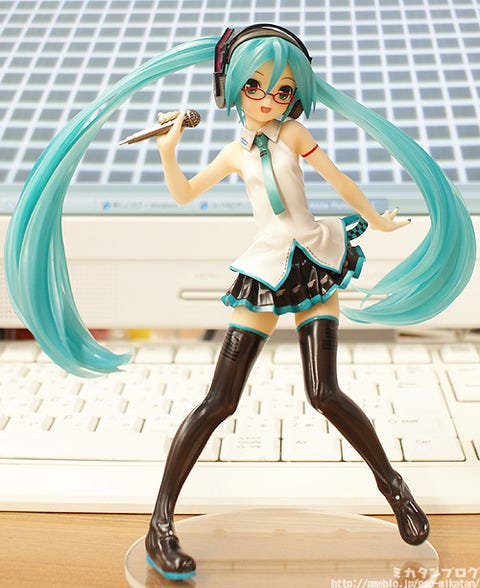 This Miku was also on display at WonFes… I upped a picture of her on twitter and she was possibly the most popular of all the images I upped: http://twitpic.com/3www1b

It’s a popular model of Miku created as a 3D model for MikuMikuDance (MMD) by Lat!

Those who use NicoNico might know that there is even a prize for the MMD video that gets the most “My List” adds on NicoNico! :O 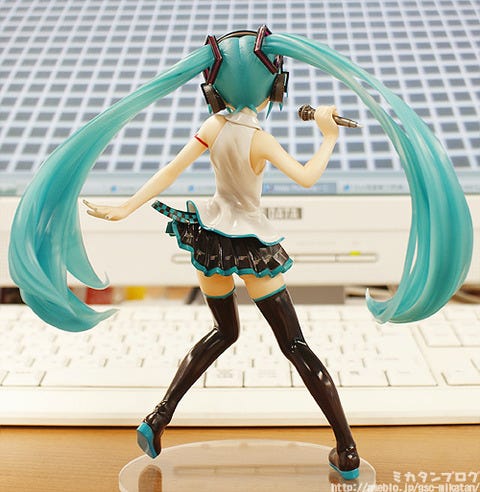 I wanted to take more of an angled shot but this was the best I could get… I promise that even the parts you can’t see are made just the like Lar-type model! 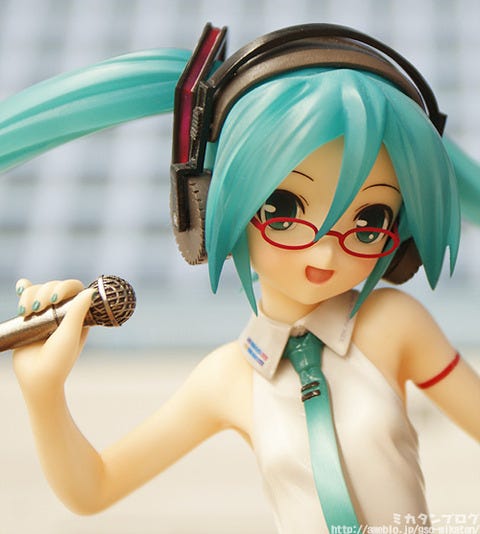 Another thing about Lat-type Miku is that she looks a little bit younger than the normal Miku… which is definitely visable in this figure. I don’t know how anyone couldn’t fall in love with face!! 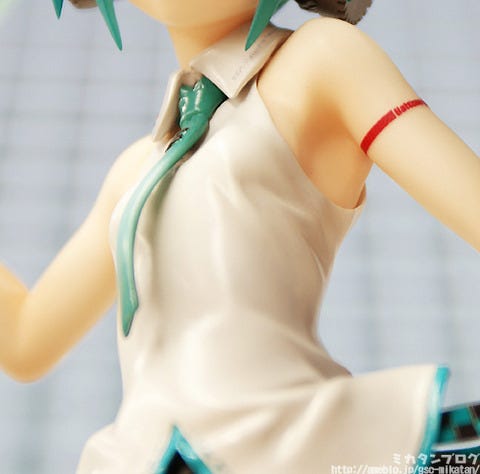 And a red ring on her arm!

The normal Miku has a ’01’ symbol on her arm, but Lat-type Miku instead has a red band that goes around her entire arm! If you squint you can even read the tiny writing… I wonder how this is going to be mass-produced…? 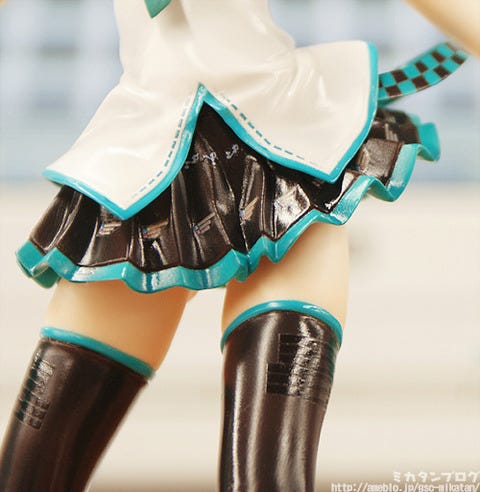 The checked chain is really pretty!
You can see it at the back behind the skirt here…


And look at those thighs!! :D 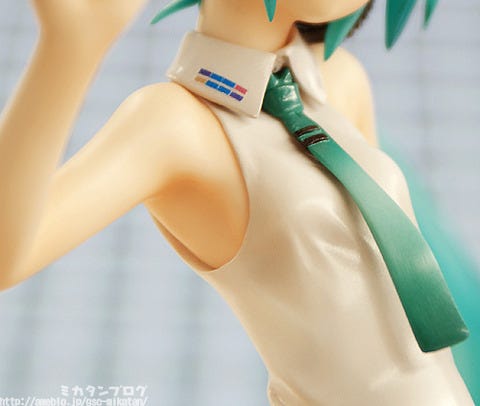 She also has a lovely little neck-tie

Another part of Lat-type Miku that sets her apart from normal Miku… the original Miku’s tie was much longer! Lat-type Miku’s tie kind of looks like it’s fluttering upward as well which really gives a dynamic feeling to the figure… it really seems like she’s dancing! 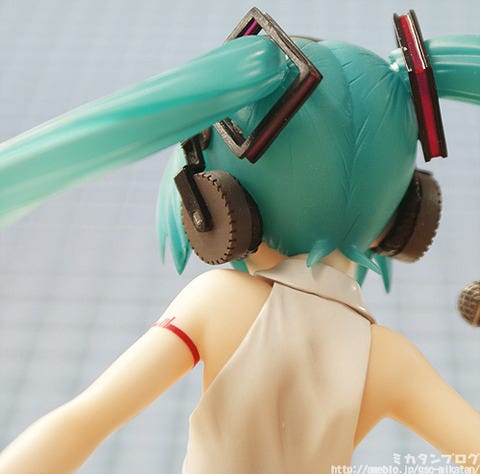 A close-up on her headphones!

This set of headphones is also a Lat-type specific design! They are made using 3D data so they are pretty nicely detailed… definitely worth a close look! 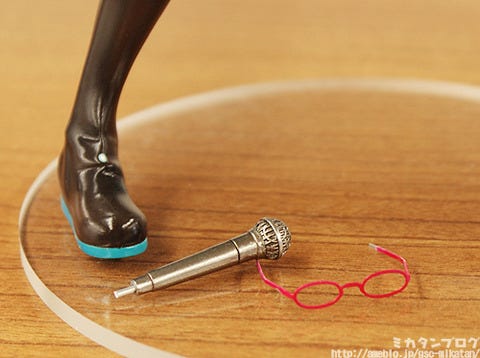 Her mike and glasses can be removed!

She even comes with an alternate mike that suits her better when she’s not wearing her glasses! 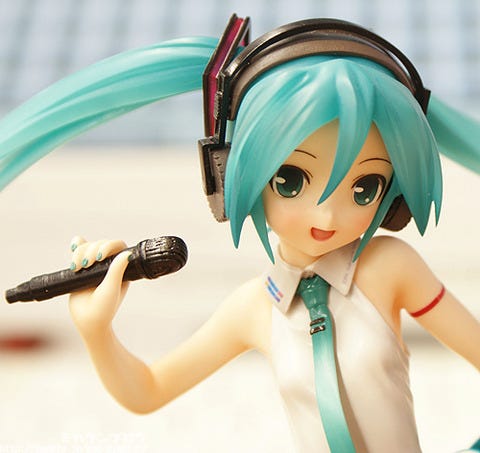 As you can see the mike is black and features a different design to the standard mike. (Apparently this was a request from Aki :P) 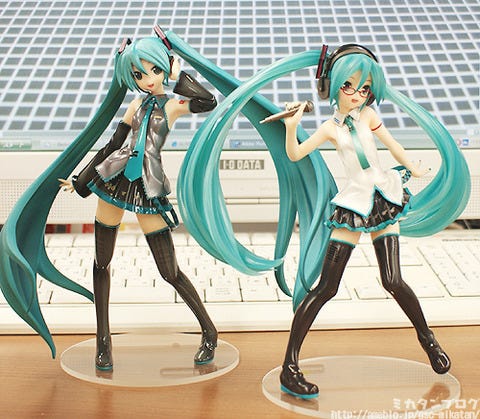 1/8th scale Miku is getting a re-release!


She will be re-announced at the same time as Lat-type Miku is announced! They look great together, so if you ever grabbed the original consider picking her up this time!

They’ll be on the GSC site from the 22nd!

For ordering information or questions check out our partner shops.

Whether you’ve noticed or not… it’s already Friday!