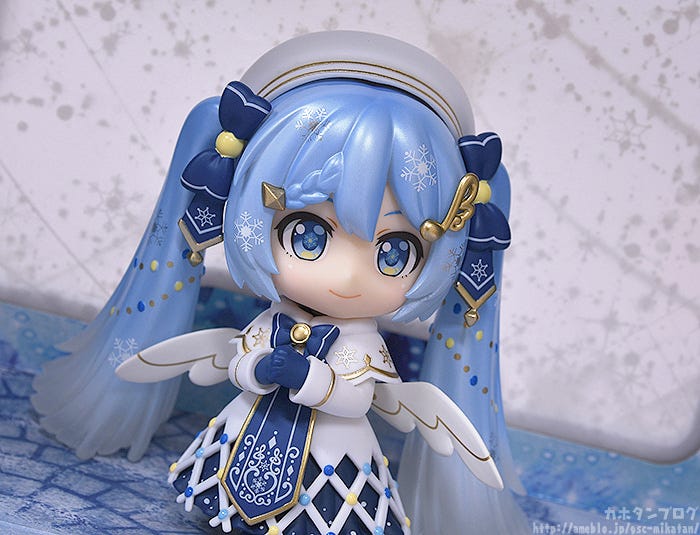 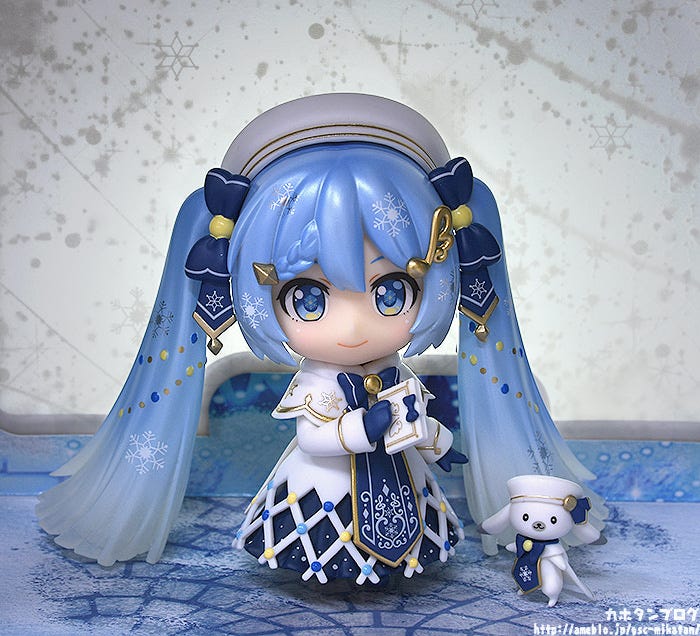 Bring the magic of a winter night to your collection.

2021 marks the 12th anniversary of Snow Miku, and the 2021 design was once again selected by fans through online votes between a selection of outfits all submitted to piapro by fans! This year the theme was “Illumination in the Image of Hokkaido Snow”, and the winning Snow Miku design was this version based on illustrations by Annatsu Mikan!

The Nendoroid comes with three face plates including a standard expression, an enamored expression and a smiling expression. Both her clock-themed beret and warm-looking cape are removable. She also comes with a miniature figure of Rabbit Yukine, a smaller beret that she can be posed holding and a song book in both opened and closed versions!

Additionally, the ribbon on her dress can be switched out with a different part to make it look like stretched out angel wings! A clock-themed circular plate that can be used as a background or displayed at her feet is also included. Be sure to add her to your collection!

What is Snow Miku?

Snow Miku is a character designed to enliven the Winter of Hokkaido. She was originally created due to a snow sculpture of Hatsune Miku made at the 2010 Sapporo Snow Festival, and has been a part of the ‘SNOW MIKU’ festival in Hokkaido every year since.

The 2021 theme for Snow Miku is “Illumination in the Image of Hokkaido Snow”! We received all kinds of designs from fans across the world!

Of those entries, ultimately Annatsu Mikan’s design received the most votes in the poll and was selected as this year’s design! 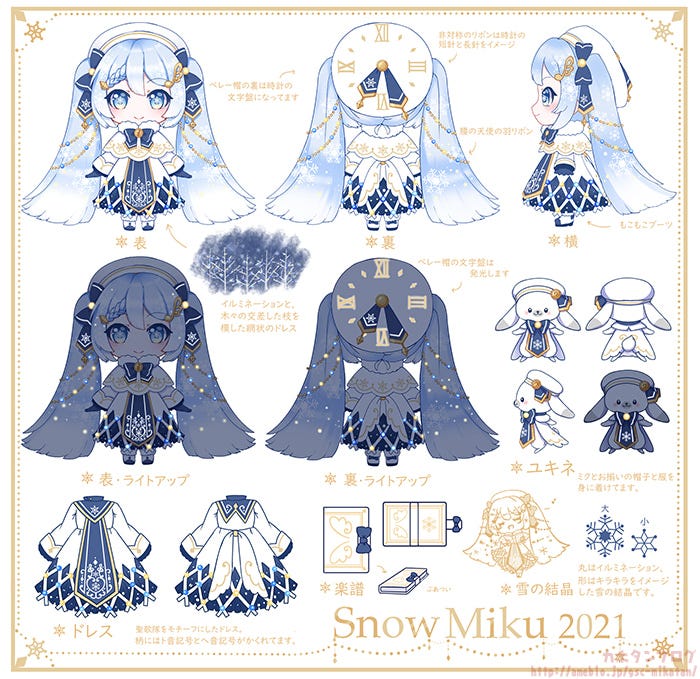 ⇒Check out the design here!

To everyone who sent in a design: thank you! 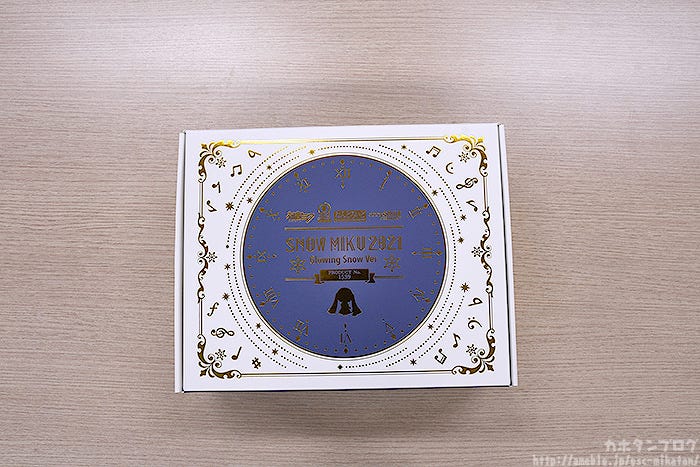 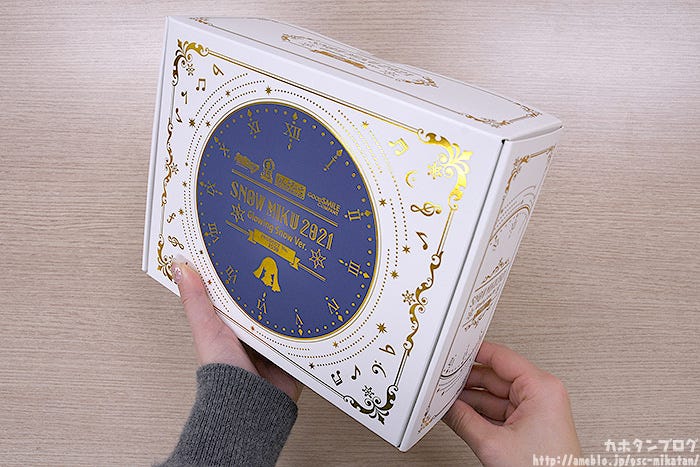 At first glance, it appears there is no window on the packaging to see the Nendoroid inside, but… 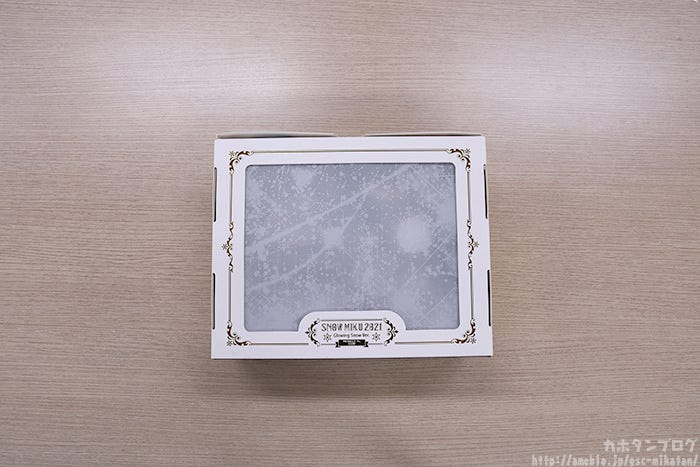 Taking a look at the back, you can see that there is a window! However, it’s covered with some kind of translucent sheet!? It’s difficult to see the Nendoroid through it… 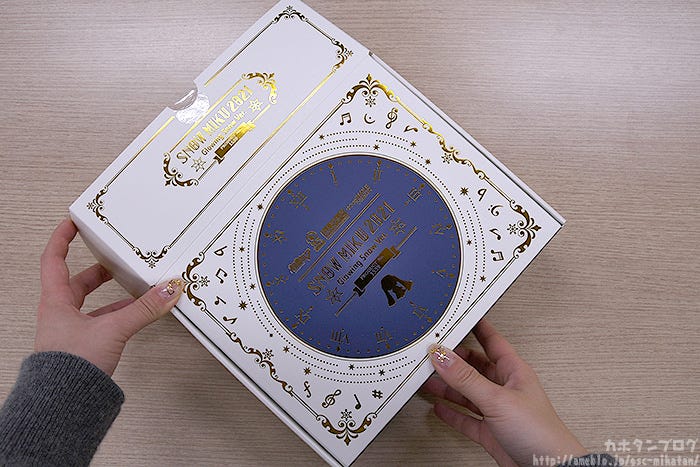 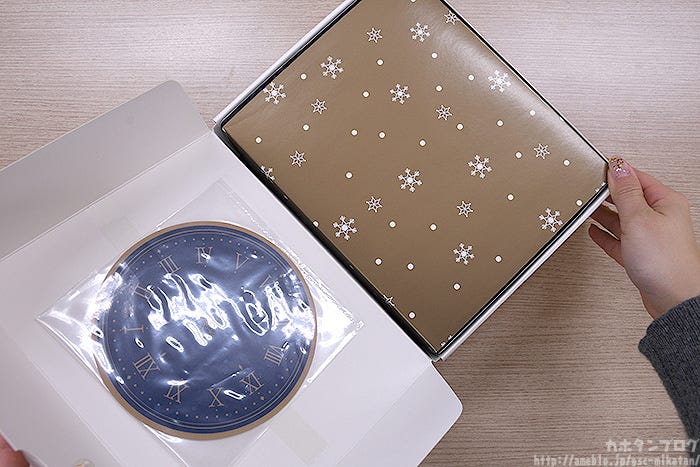 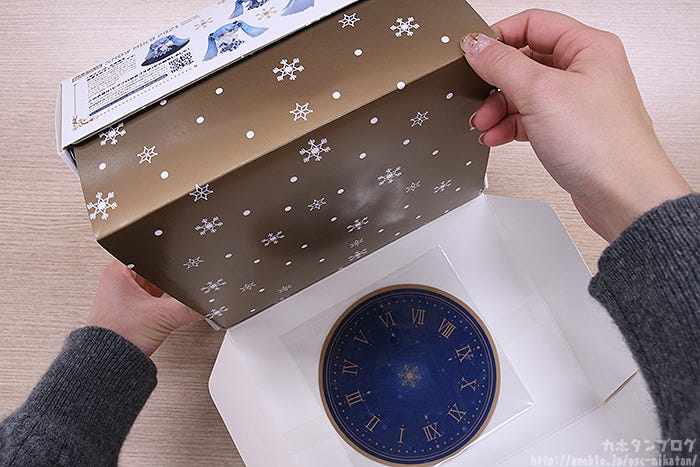 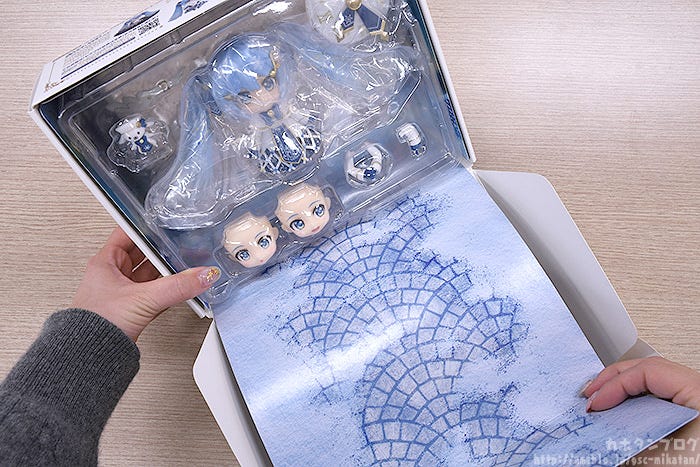 It’s a brick pathway! And Miku!

Here’s what the inside of the box looks like! 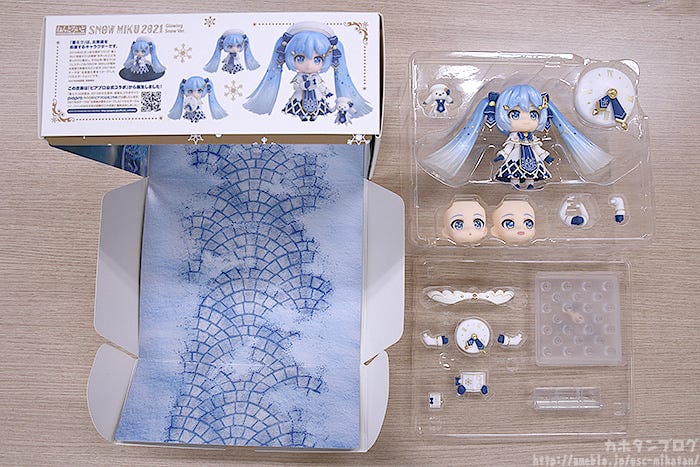 The packaging takes up quite a bit of space this time, but… 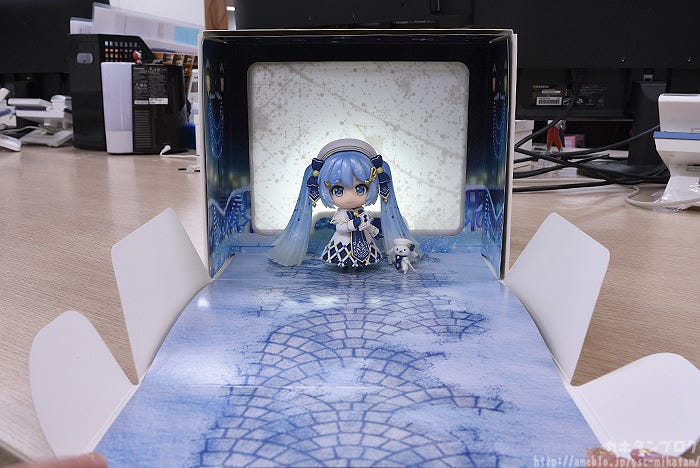 …you can actually use the packaging as a display piece, or for photography!

As for that translucent sheet on the back of the box… 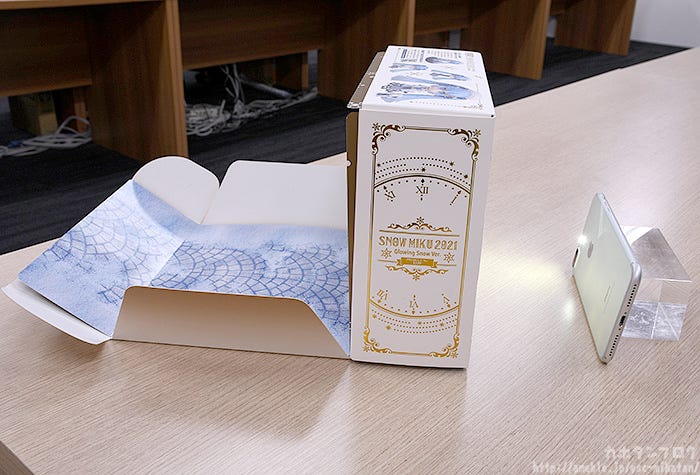 This sheet diffuses light when light is shined on it, making for a great soft light source for displaying MikU!u! 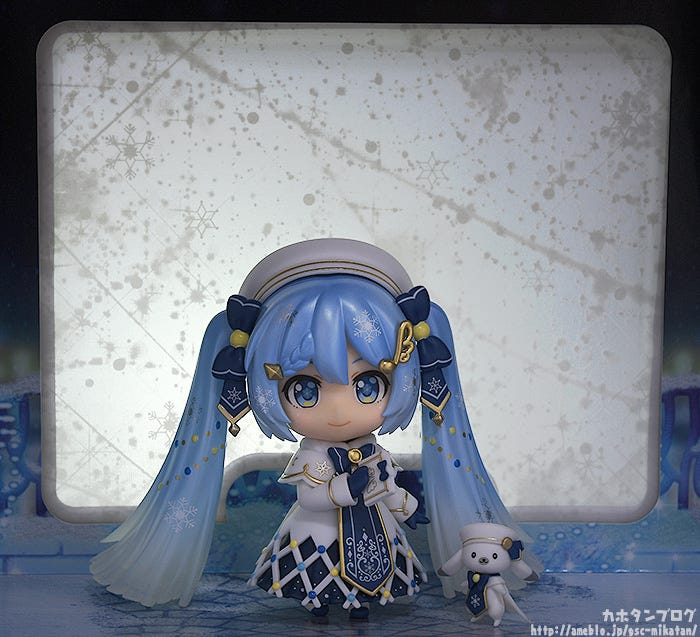 ▲I love the subtle design on the sheet too! 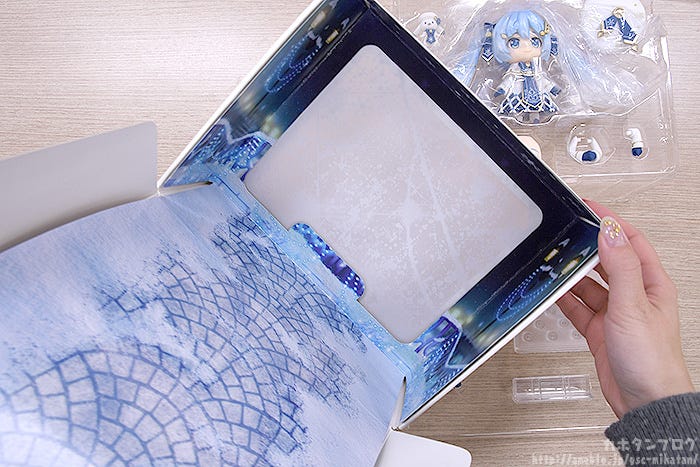 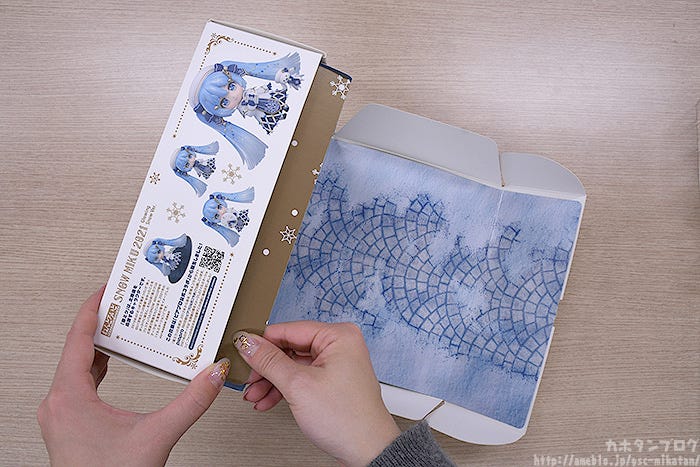 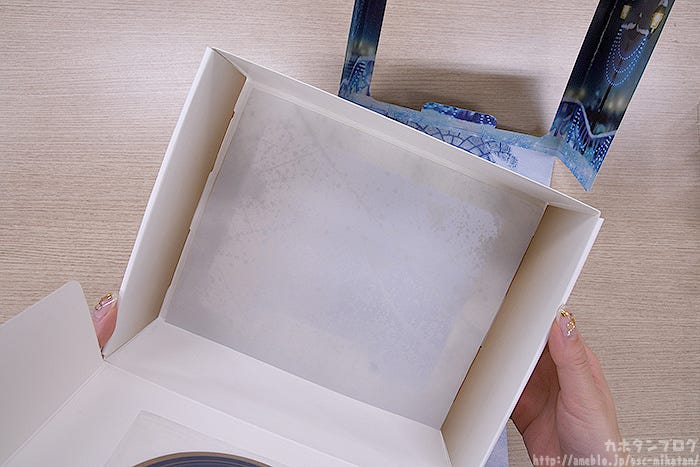 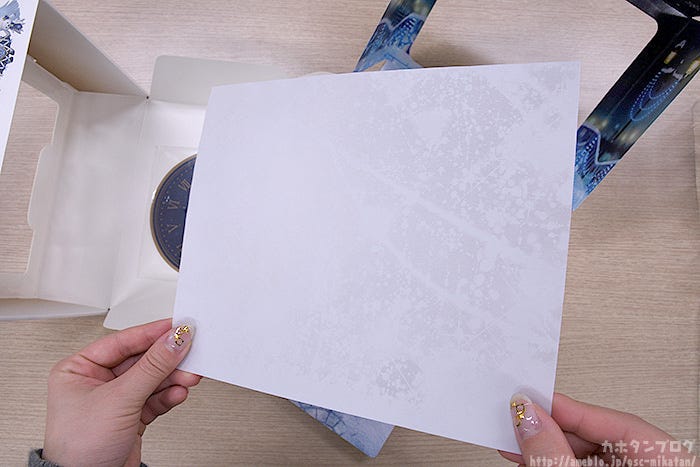 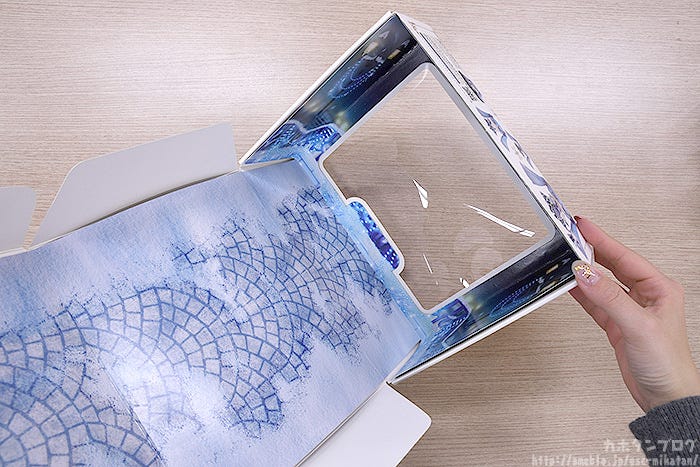 The translucent sheet can be removed too! That way, if you want to display Miku in the box, you can still do that without any trouble! 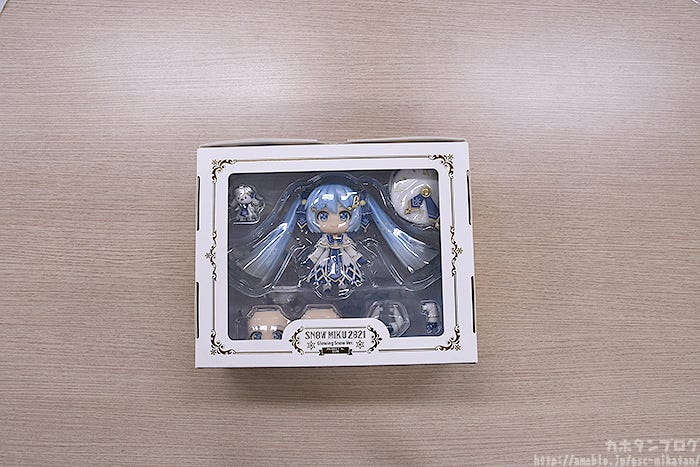 ▲You can see Miku inside just by removing that sheet!

As for accessories, in addition to the standard face plate shown earlier, she also comes with a surprised face plate! 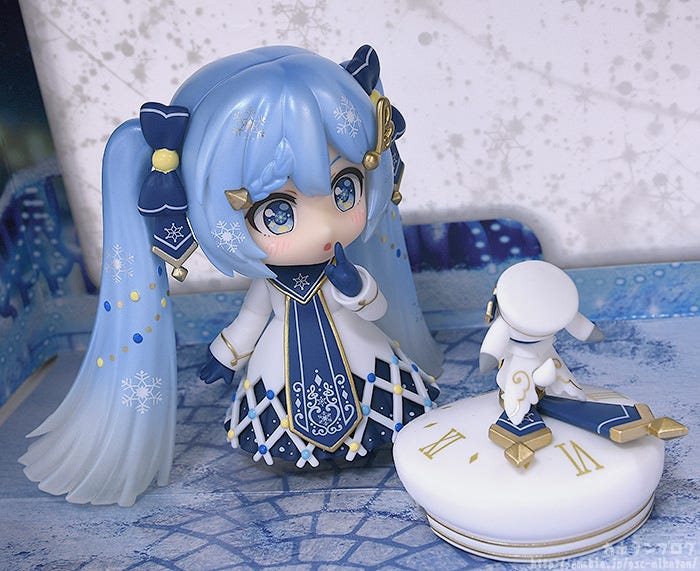 Like her cape, her hat is also removable, so you can display her with or without it on! 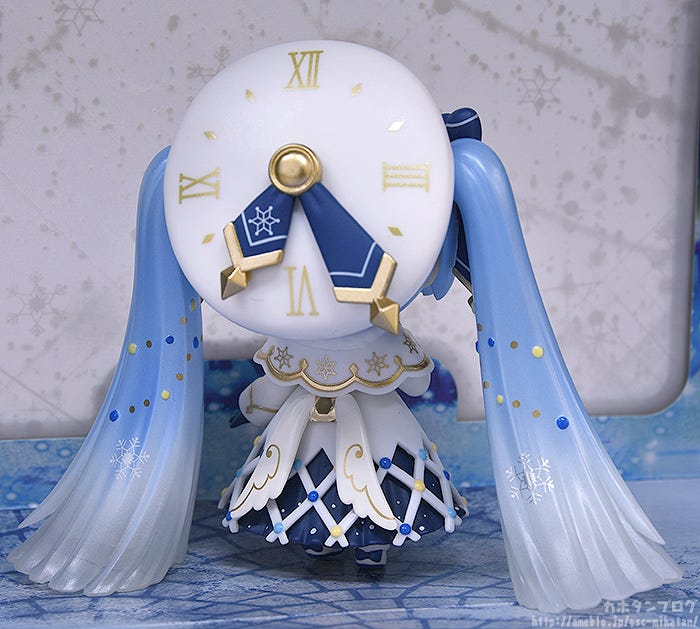 ▲The ribbons on her beret look like hands on a clock! 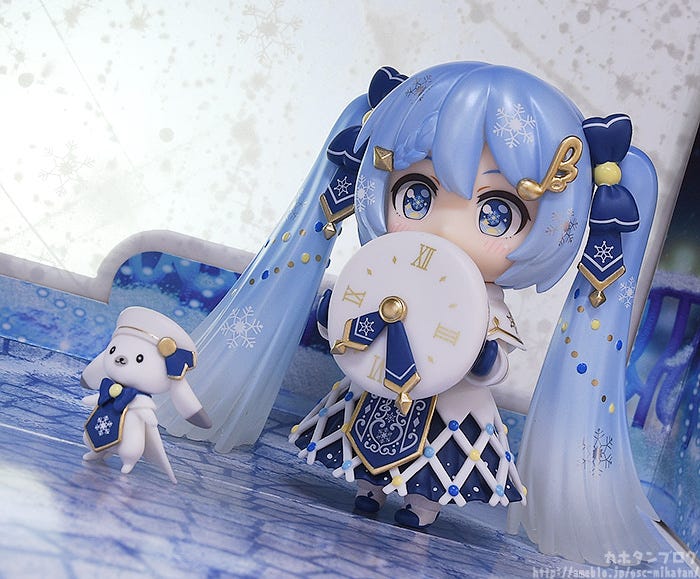 ▲She also comes with a smaller version of her hat that she can be posed holding!

Rabbit Yukine is wearing an adorable outfit that looks great with Miku’s! 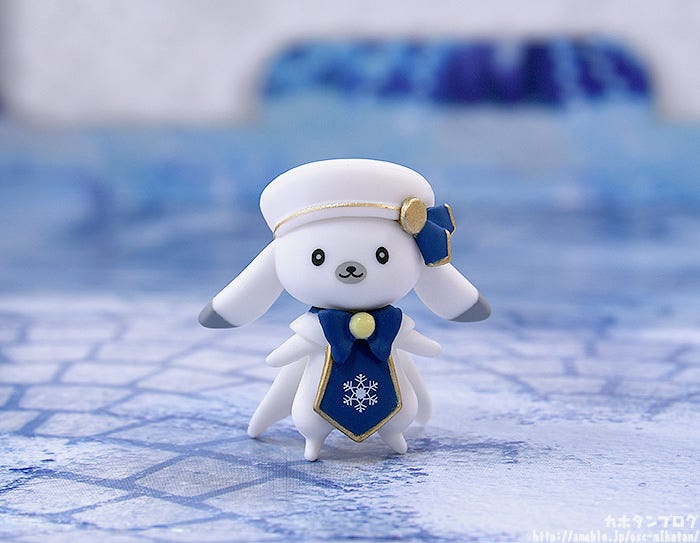 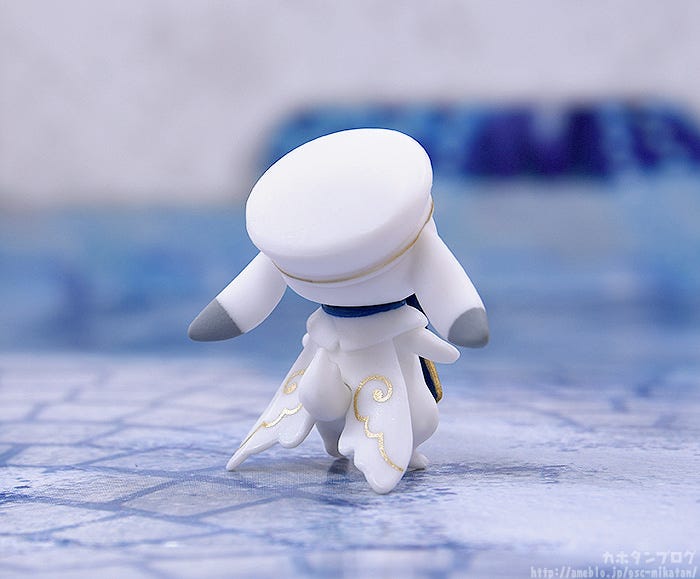 ▲There’s even a winged design on the back too!

Speaking of wings, Miku herself comes with both a standard ribbon part and an extended ribbon part that looks like spread out angel wings! 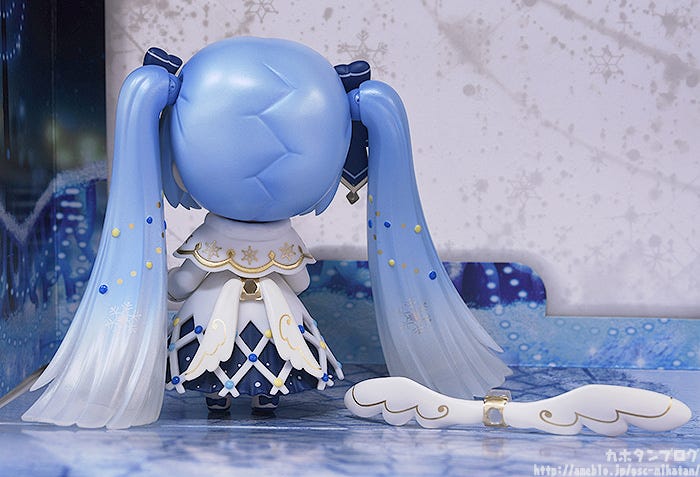 ▲Those wings look adorable from the front too!

As for her third face plate, it’s a smiling expression! 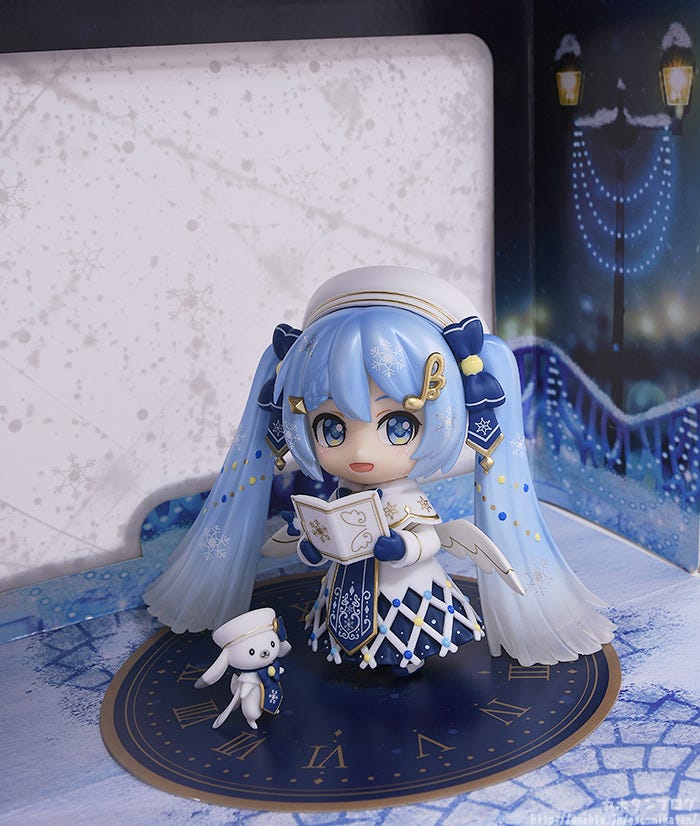 Pose with her songbook to make it look like she’s singing! 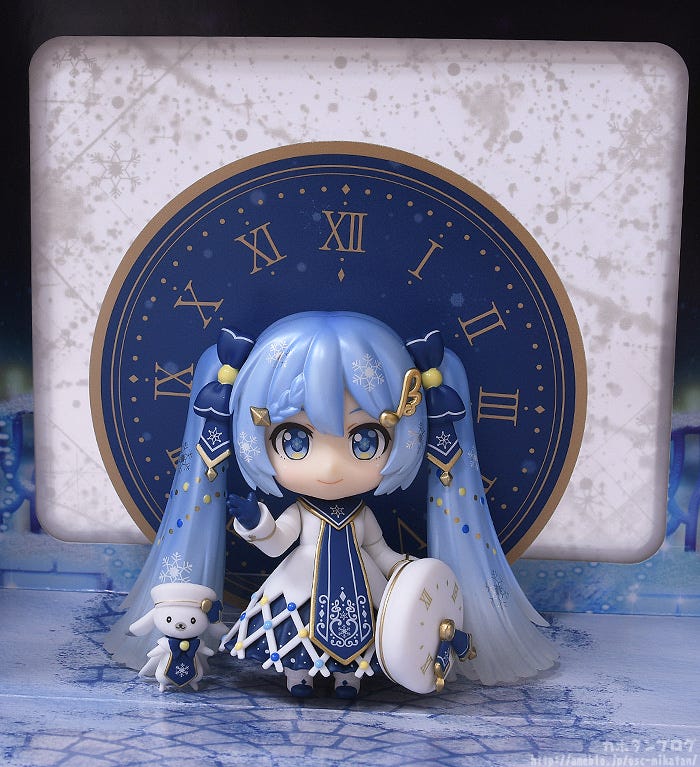 A limited quantity of this Nendoroid will be up for purchase from the 11th of February! Check out the product page for more information!

Preorders for many products at the GOODSMILE ONLINE SHOP are closing soon! Here are the products closing the 04th February 2021 (Thu) at 12:00JST!

Preorders for many products at the GOODSMILE ONLINE SHOP US are closing soon! Here are the products closing the 04th February 2021 (Thu) at 12:00JST!