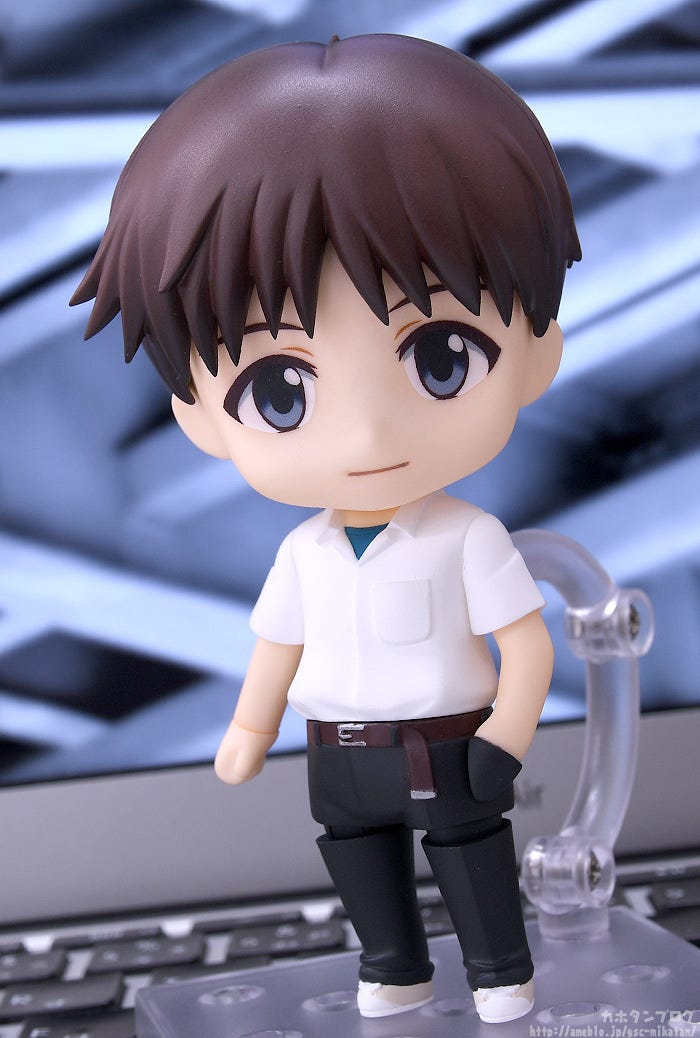 From the popular animated film series “Rebuild of Evangelion” comes a Nendoroid of the Third Child, Shinji Ikari. He comes with three face plates including a standard expression, a lethargic expression and a blushing expression.

He comes with his bag, backpack and portable music player as optional parts in order to recreate various scenes from his everyday life. A base made to look like stone rubble and special lower half parts to pose him sitting are also included. He can be combined with the upcoming Nendoroid Kaworu Nagisa to create a special display of the two of them. Be sure to add him to your collection!

From the “Rebuild of Evangelion” movie series comes a Nendoroid of the EVA pilot and protagonist, Shinji Ikari!

His Tokyo-3 First Municipal Junior High School uniform, shoes and belt have all been perfectly recreated in Nendoroid size!

For optional parts, he comes with his backpack and his bag. Looking at that bag makes me remember the scene from when he moved in with Misato Katsuragi! ( ੭ ･ᴗ･ )੭ ▲A hand part of him holding his note is included! ♪

In addition to his standard expression face plate, a face plate of his memorable lethargic expression is also included! This is quite a complicated expression. His eyes give off the impression that he’s completely shut down his emotions and closed off his heart.

By the way, here’s a full look at the portable music player part. It’s quite easy to put on and take off! ▲The earphones stay attached by sliding the earpiece parts over his ears!

As for his third expression…! Those faintly pink cheeks are so cute! ▲Combine with his backpack to show him walking to school!☆彡 Yep! A stone rubble base and special lower half parts to display him sitting are included!

You can see the base above is a triangular piece of stone rubble, but combine with the upcoming Nendoroid Kaworu Nagisa and… (Nendoroid Kaworu Nagisa will come with a similar triangular base!)

Available for preorder from the 17th of December!

Following Asuka and Rei, here is a first look at the painted prototypes of Nendoroid Shinji Ikari and Nendoroid Kaworu Nagisa from “Rebuild of Evangelion”! Stay tuned for more info!#evangelion #nendoroid #goodsmile pic.twitter.com/KzmEwjWfrN Preorders for many products at the GOODSMILE ONLINE SHOP are closing soon! Here are the products closing the 19th December 2019 (Thu) at 12:00JST!

Preorders for many products at the GOODSMILE ONLINE SHOP US are closing soon! Here are the products closing the 19th December 2019 (Thu) at 12:00JST!