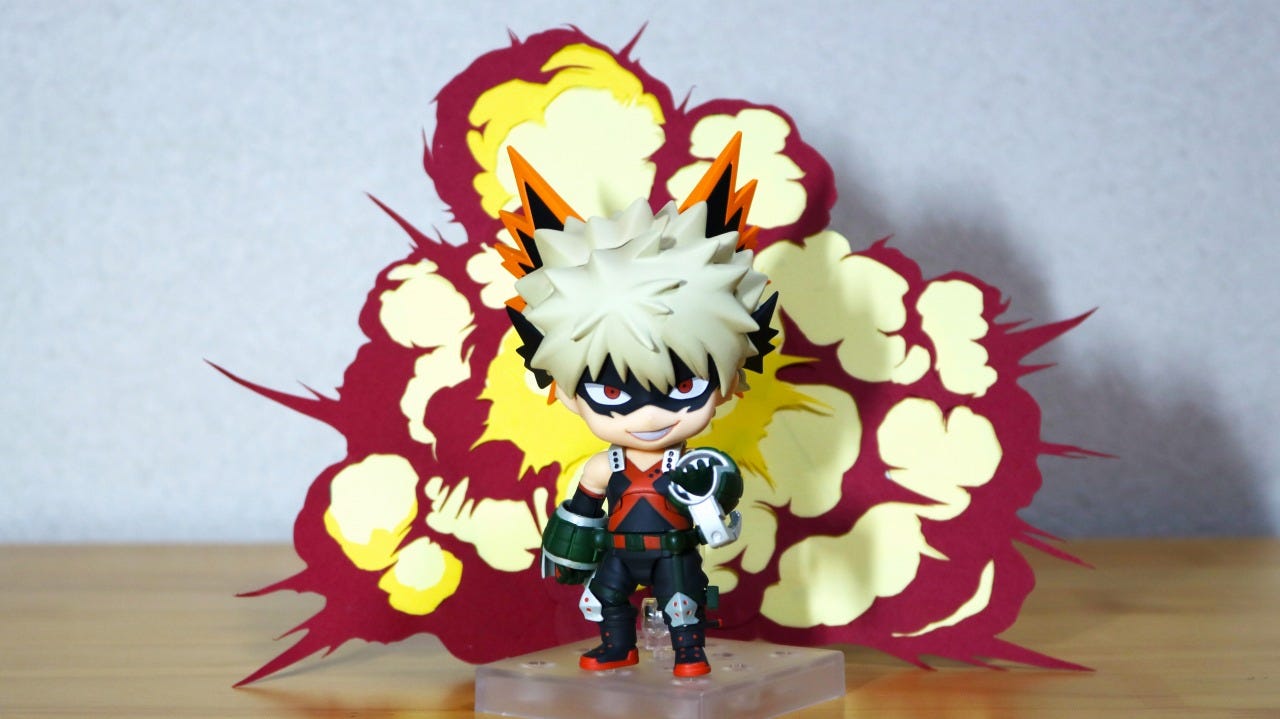 Hello! My name is Mino (@gsc_mino), and I work in the Manufacturing Department at Good Smile Company!

How do you decorate your figures at home? Have you ever thought to yourself, “I wonder if there’s something I can make myself to make my display even cooler…”

I’ve thought about this a lot before, and so today…

A lot of you are probably thinking, “Huh? Shadow box?” right now, so let me explain!

Most of you are probably familiar with Shadow boxes, displays that often utilize layers of paper in order to create an effect of depth. The 3D aspect is what makes them a bit different from simple paper cutting.

So for this article, let’s try making some original paper craft effects with depth to pair with figures!

I don’t think this has been attempted before, so we’ll see how it goes!

By the way, we’ll be pairing our effects today with these three “My Hero Academia” Nendoroids! 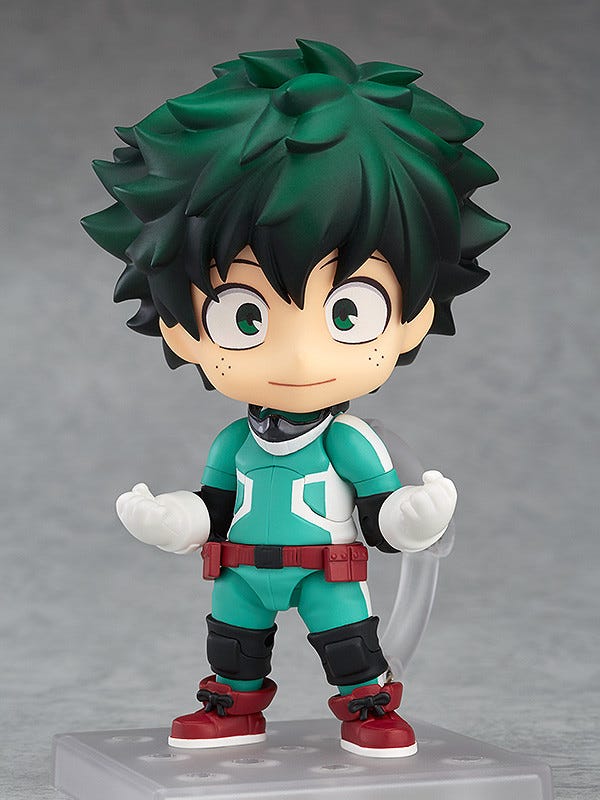 From the popular anime series ‘My Hero Academia’ comes a rerelease of the fully articulated Nendoroid of the main character who dreams he will become a hero – Izuku Midoriya! He comes with three different face plates including a standard gentle expression, a hesitant crying expression as well as a combat expression for when he decides it’s time to be a hero!

His unique green jumpsuit has been faithfully shrunk down into Nendoroid size and he also comes with special glove parts to pose him using his ‘One For All’ Quirk. A ‘SMASH’ sound effect plate is also included to bring even more life to his action poses! Recreate your favorite scenes from the series! 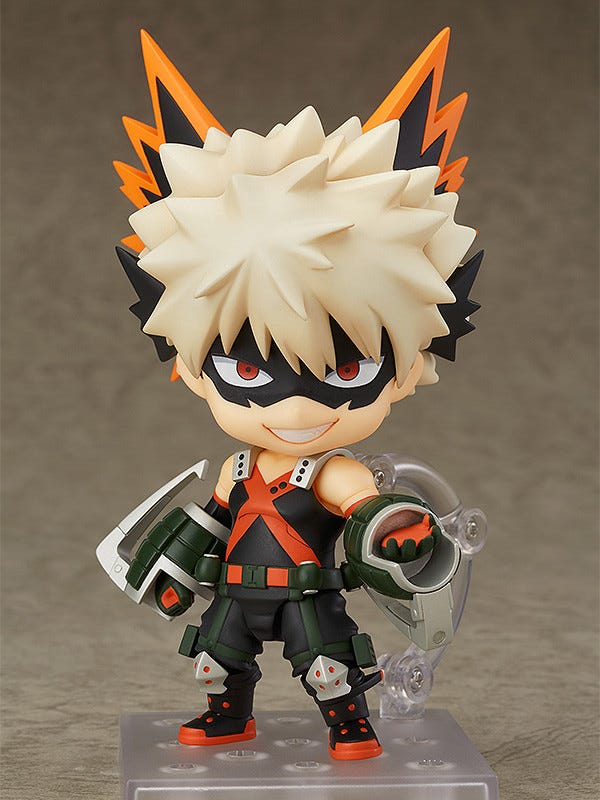 From the popular anime series ‘My Hero Academia’ comes a rerelease of the fully articulated Nendoroid of the main character’s childhood friend and rival – Katsuki Bakugo! He comes with three face plates including a confident standard expression, an aggressive combat expression as well as a sullen glaring expression.

His unique outfit that he calls ‘Full Body Dynamite’ has been faithfully converted into Nendoroid size, and effect parts to recreate his ‘Explosion’ quirk together with a ‘BOOOM’ text plate are included to bring his Nendoroid action scenes to a whole new level! Recreate your favorite scenes from the series and more! 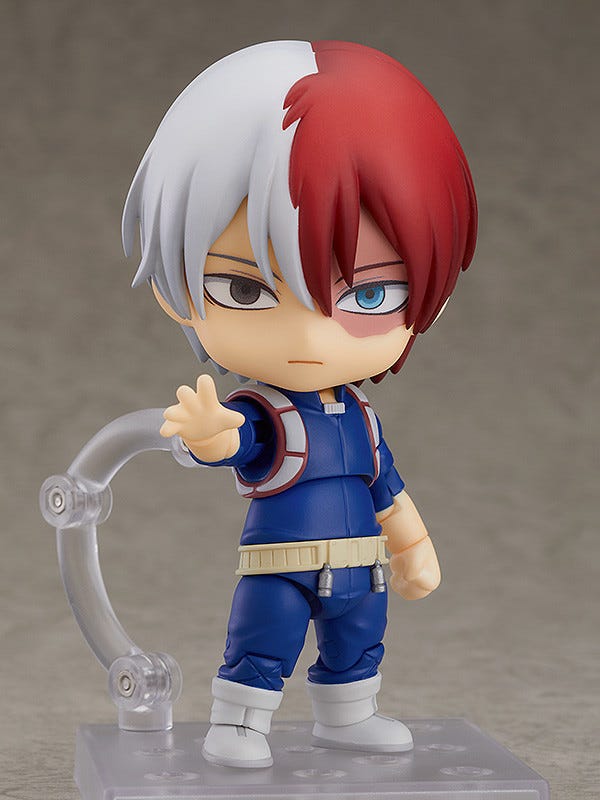 Now, let’s make some cool displays to enhance these Nendoroids even more!

Here’s what I’ll be using!

The original illustration is probably the most important part of the process!

When drawing your effect, be sure to reference your Nendoroid to make the effect the correct size! I’d recommend drawing a Nendoroid-sized oval on your paper first for reference.

Here’s what I came up with for Deku! Shockwave effects from using “One For All”! Of course, the effect I drew for Bakugo is an explosion!

Finally, here’s what I came up with for Todoroki! Since it’s Todoroki, I drew fire and ice effects!

I only realized afterward, but I might have made these effects a little too complex to cut…

Simpler designs are easier to cut out, so keep that in mind when making your effects!

2. Using your illustrations as a reference, cut out different parts of the effect from your construction paper.

The ice effect ended up being a little too complicated for me, so I added color in to make it a little easier. I don’t think I’ll be able to cut out every color from this one, so I’ll simplify it as I go! You’ll probably want to make multiple copies of your reference illustration, as you’ll be cutting out different parts on different construction paper sheets!

Cutting out different parts on different colored paper will allow you to layer them later and create the shadow-box-like 3D effect.

*Please be very careful when cutting with a utility knife/precision knife so as not to cut yourself!

3. Layer the construction paper to create the 3D effect.

Apply glue to very small pieces of cardstock to make your spacers. These are what make the effect appear 3D!

You can even stack multiple spacers to create a more exaggerated 3D look if necessary. ▲Occasionally use two spacers stacked on each other for an even more impressive 3D look!

4. Attach wire to the back. (For these effects, just Bakugo and Todoroki’s effects need wire stands!)

Attaching wire to the back of the effects will allow them to stand up on their own!

There’s no set way to do this, just go by feel! And now, for the complete effects! It takes some time from the original drawing until they’re done, but it’s totally worth it!

Let’s try displaying them with the Nendoroids! ▲Based on One For All! The lighting parts were challenging to get right, but it looks great! I used tape to attach these effects to the Nendoroid. ▲I used masking tape to stick this one to the figure! ▲For the second effect, I attached it to some support arms. (I then deleted the supports arms in post-production for the photo.) ▲It works great with his included BOOOM text plate! Combine with your other Nendoroids for even more fun! ▲Recreate the world of “My Hero Academia”! ▲In his standard pose. ▲Pair with his included effects for a cool battle pose! ▲Pair with his CRAASSH text plate! ▲As though saying “Good bye.”

I think they turned out great with the figures, and they were a lot of fun to take pictures with!

The materials don’t cost to much, so be sure to try it yourself!