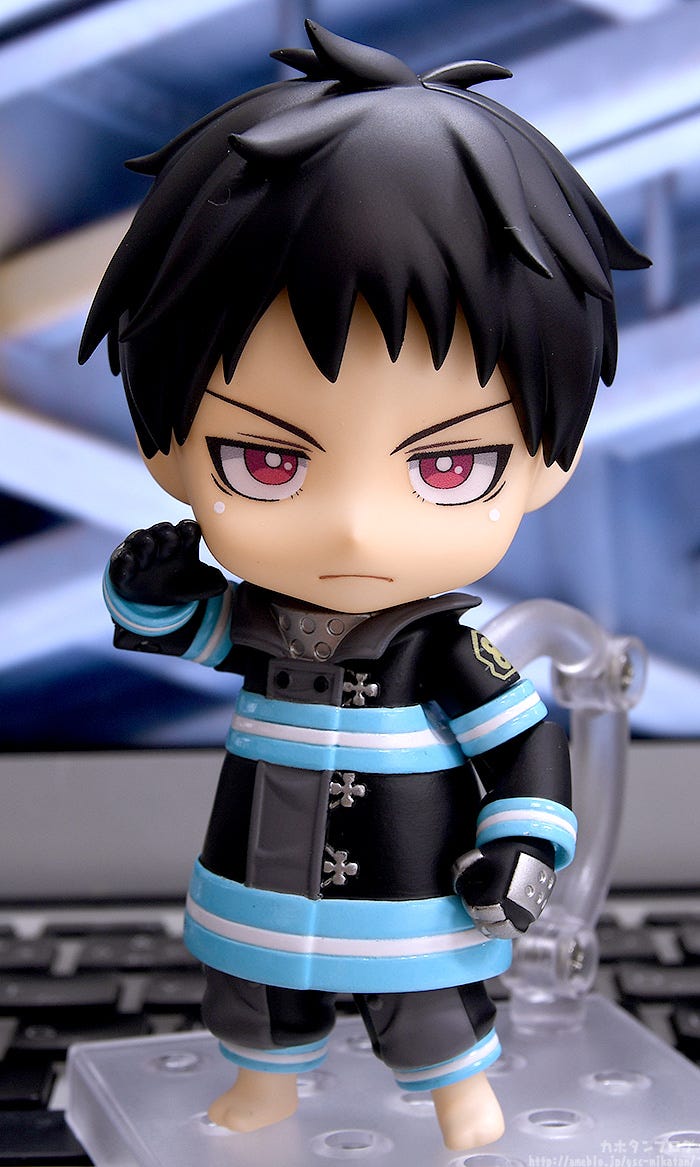 From the anime series “Fire Force” comes a Nendoroid of Shinra Kusakabe! He comes with three face plates including his standard expression, his intense combat expression and his smiling expression said to make him look like a devil.

“I’ll become a hero for sure!”

The third generation pyrokinetic and second class fire soldier Shinra Kusakabe has been transformed into an adorable Nendoroid!

His eye-catching blue-striped uniform from Special Fire Force Company 8 has been recreated in outstanding detail!

Interchangeable hand parts for creating hand signs are included, allowing you to recreate poses like this! ▲Each finger is sculpted to perfection! ▲Use the support arm to pose him as though he’s flying through the air!

In addition to his standard expression face plate featured above, a combat expression is also included! (｢`・ω・)｢ ▲His sharp teeth have been clearly recreated!

Of course, his so-called devilish smiling expression he shows when he’s nervous is also included! His frightening, unique look has been faithfully recreated! ( ；∀；)

Additional interchangeable flame effect parts for his feet are included as seen above! ▲These are the two types of effect parts included!

I want to take a look at one more thing! Yep! As you may have noticed, hand parts for creating the “Corna” hand sign are also included! ( ・ㅂ・)و̑

Take note of how his bent left leg part features a sculpted clothing part to keep the look of his uniform natural! ▲This part makes it easy to recreate action poses without compromising the look of the figure!▼ Available for preorder from the 19th of November!

Preorders for many products at the GOODSMILE ONLINE SHOP are closing soon! Here are the products closing 21st November 2019 (Thu) at 12:00JST!