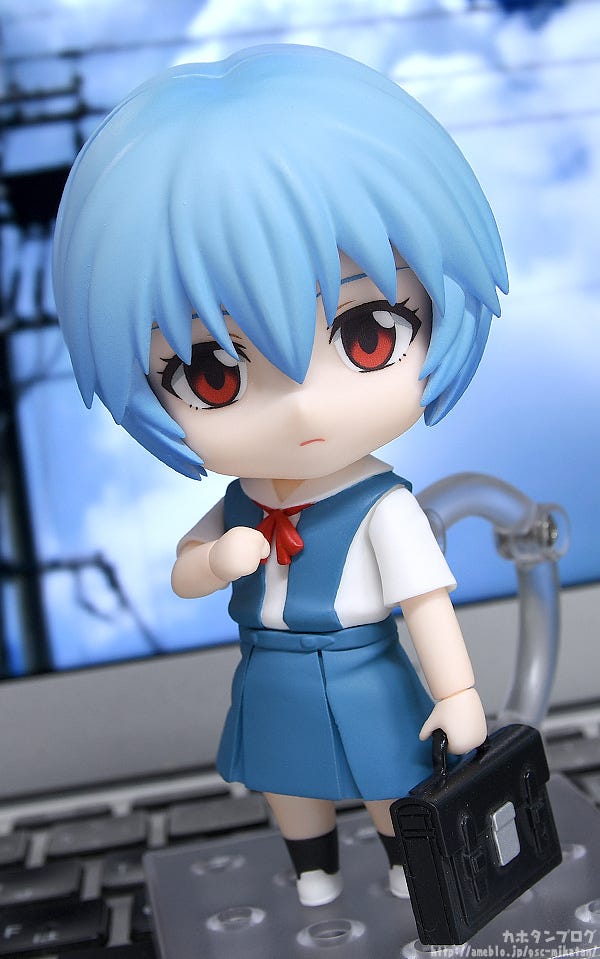 From the popular animated film series “Rebuild of Evangelion” comes a Nendoroid of the First Child, Rei Ayanami. She comes with three face plates including a standard expression, a blushing expression and a smiling expression.

For optional parts, she comes with her bag, a rag & bucket and kneeling lower-half parts to recreate scenes from her everyday school life. Additionally, eye patch and bandage parts are included, allowing you to recreate her injured appearance. Be sure to add her to your collection, and look forward to more Evangelion Nendoroids coming soon!

From the anime film series with fans across the globe “Rebuild of Evangelion” comes a Nendoroid of Rei Ayanami! ◎

In addition to her cool standard expression, she also comes with a blushing expression! A smiling expression is included as well! Combine her face plates and interchangeable arm parts to recreate your favorite scenes from the series. ₍₍(∩´ ᵕ `∩)⁾⁾

Additionally, as was displayed at Wonder Festival 2019 Summer, eye patch and bandage parts are also included! These parts allow you to recreate her injured appearance from the films.

You can clearly see the knot of her sling behind her neck! The eye patch attaches behind her front hair parts! (｢･ω･)｢ In order to create another scene from her everyday school life, a bucket & rag + kneeling lower-half parts are included! Such a quiet, peaceful scene. Far removed from the battles with Angels.

Enjoy combining her different parts and face plates when you take her home to create your own version of Rei Ayanami! ( ･ㅂ･)و ̑̑