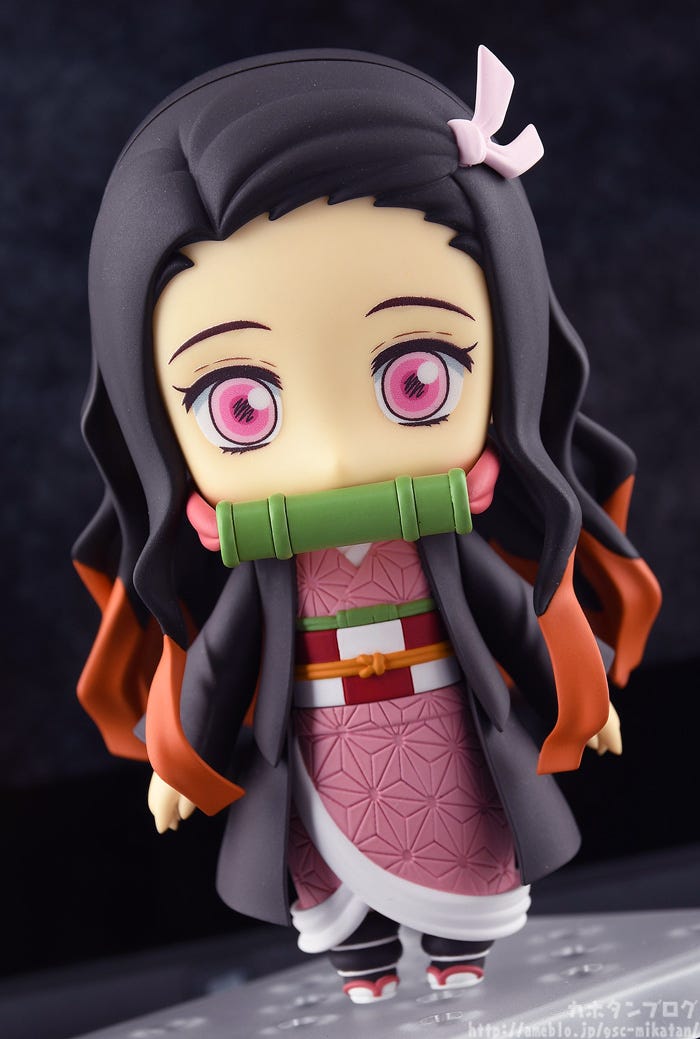 Today I’ll be taking a look at…. From the popular anime series “Demon Slayer: Kimetsu no Yaiba” comes a Nendoroid of Nezuko Kamado! She comes with a standard expression as well as a ghastly demon face.

Her powerful punching and kicking poses from her enhanced strength as a demon can easily be recreated in Nendoroid form. She comes with her box that Tanjiro carries on his back as an optional part, which can be displayed on the back of Nendoroid Tanjiro Kamado (sold separately). Be sure to add them both to your collection!

After Nendoroid Tanjiro Kamado, she is the second “Demon Slayer: Kimetsu no Yaiba” Nendoroid! Everything from her adorable outfit to the bamboo at her mouth has been carefully recreated! ▲Even her hair ribbon and the obi of her kimono have been captured in detail! Taking a look from the back, you can clearly see the red tips of her hair have been carefully recreated as well!

They also feature a detailed sculpt, making for an incredibly impressive appearance overall!

As for optional parts, she comes with the box that Tanjiro carries! The rock lacquer coated Cloud Mist Pine Box for carrying Nezuko in the daytime has been perfectly captured in Nendoroid form!

Using interchangeable lower half parts, you can also display her sitting on her knees! The box can be displayed being carried by Nendoroid Tanjiro Kamado!

The wood grain texture sculpted in gives it a luxurious appearance!

Of course, the door can also be opened!

The box is hinged, allowing you to easily open and close it!

Let’s take a look from all angles!

You can see the wood grain appearance is featured on all sides.

The straps are articulated, making it easy to display on Nendoroids!

*This is a product in development. The actual product may differ. ▲Create your own display of the siblings with the box!

Next up, let’s take a look at her face plates!

In addition to her standard expression, a demon expression is included as well! Her narrowed eyes and the blood vessels on her head make for a ghastly appearance! Using the interchangeable lower-half parts, you can recreate the ball-kicking scene from the fight with Susamaru! It’s easy to pose her in various fighting poses!

Finally, I want to draw your attention to one more detail!

Her fingertips have been carefully sculpted into pointed tips! ▲Check out all of the details when you take her home!

Be sure to preorder with Nendoroid Tanjiro Kamado!