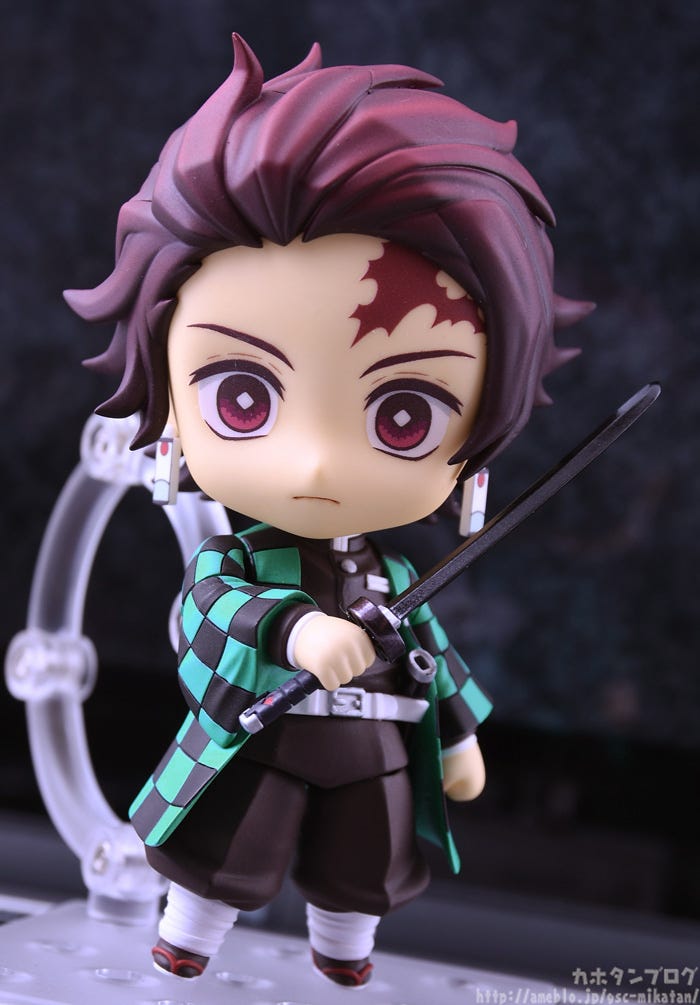 From the anime series “Kimetsu no Yaiba: Demon Slayer” comes a Nendoroid of the protagonist Tanjiro Kamado! He comes with three face plates including his standard expression, a gallant combat expression and a gentle smiling expression.

Enjoy recreating bloodcurdling poses of the demon-slaying Tanjiro as well as gentler poses showing his smiling face. Be sure to add him to your collection!

The gentle boy with a heightened sense of smell, Tanjiro Kamado is now a Nendoroid!

We unveiled the painted prototype at Wonder Festival 2019 Summer, and now preorders are opening soon!

The green and black checkered pattern of his coat has been carefully recreated!

His Demon Slayer Corps uniform has been carefully captured as well! ▲The scabbard of his Nichirin Blade has also been carefully recreated! The checkered pattern has been recreated on the back too!

The careful sculpting of his windblown coat is so impressive!

As for optional parts, his Nichirin Blade is included!

↑Haganezuka may have called it “unlucky”… but that pitch black blade looks so cool!

As for interchangeable face plates, he comes with his standard expression as seen above as well as a combat expression! As you can see, effect parts to recreate his “First Style: Water Surface Slice” move are also included!

These are some of the largest effect parts to be included with a Nendoroid thus far!

*Special support arms for the effect parts are planned to be included with the final product.

You can practically hear his breathing just looking at him! ▲The effect part is so large, my laptop almost wasn’t big enough to provide a background!

As for his third face plate, it’s his gentle smiling expression! This expression truly makes you feel like you can overcome anything!

Additionally, you can display his sword sheathed in its scabbard!

▲This is possible using special hilt parts for the scabbard!

Have fun recreating scenes outside of combat as well!

Available for preorder from the 22nd of August to the 19th of September! Nendoroid Nezuko Kamado, Tanjiro’s sister is also in the works!

Here is a look at the painted prototyped revealed at Wonder Festival 2019 Summer.