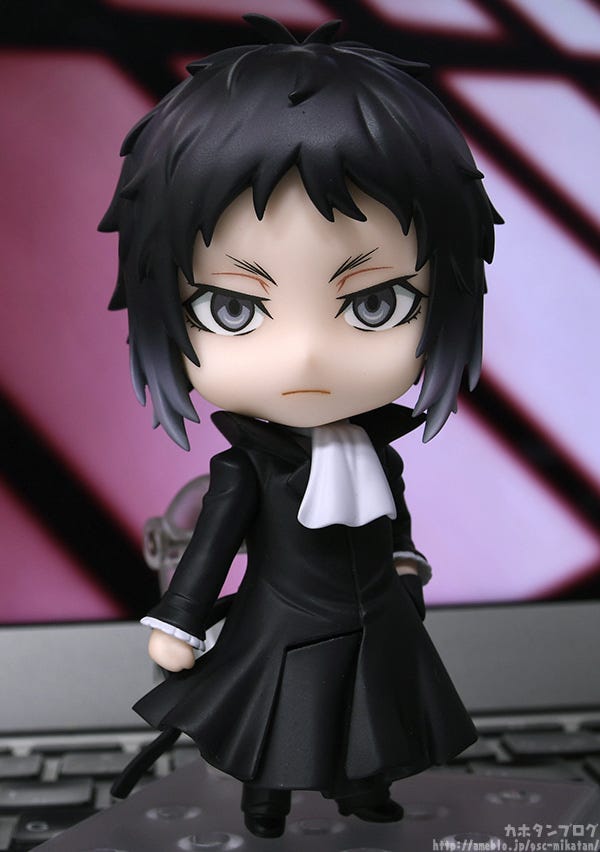 From the anime series ‘Bungo Stray Dogs’ comes a Nendoroid of Ryunosuke Akutagawa, a member of the Port Mafia that has strong control over the ports. He comes with three face plates including his standard expression, a bloodcurdling combat expression and an intrepid smiling expression.

Optional parts include effect parts from his ability “Rashomon” in its “Black Beast” and “Early Blooming Sakura” forms. Various interchangeable hand and leg parts are included to recreate notable poses from the series, like his pose with his hand to his mouth. Be sure to add him to your collection along with the other Nendoroids from the Bungo Stray Dogs series (sold separately)!

From “Bungo Stray Dogs” comes an adorable Nendoroid of Ryunosuke Akutagawa from the Port Mafia!

As seen in the picture above, Ryunosuke is the fourth character from the series to become a Nendoroid! ( ･ㅂ･)و ̑̑

His characteristic black hair and long coat have been carefully recreated! ▲Look at how his coat seems to flutter… and look at the gradation in his hair!

Using the included hand parts, you can recreate his signature pose covering his mouth with his hand! ◎ ▲The frills at his sleeves and his scarf have been carefully recreated too!

In addition to his standard expression face plate, he also comes with a bloodcurdling combat expression! ★ Those narrowly focused eyes and shouting mouth give off a frightening impact even in Nendoroid form!

Be sure to combine this expression with these parts! ((｀・∀・´)) “Black Beast” parts from his ability “Rashomon” are included!

Black and red translucent parts have been utilized to recreate the unique look of his ability. ♪ The parts fasten between the body and support arm, making for a secure fit! These parts connect straight to the stand base, so place them wherever you’d like! •̀ω•́)و It’s great that you can enjoy so many different expressions in Nendoroid form!

Finally, I want to introduce one last part! ♪ A part of his coat is removable, allowing you to attach the kicking leg part with ease. (੭ु´ ᐜ ` )੭ु⁾⁾

Be sure to pose with Nendoroid Atsushi Nakajima!

Ryunosuke Akutagawa is great on his own, but it’s also fun to pose him with other Nendoroids from the series! ₍₍(∩´ ᵕ `∩)⁾⁾ Available for preorder from the 20th of August to the 26th of September!

Preorders from the GOODSMILE ONLINE SHOP will receive a Nendoroid Plus Rubber Strap: Ryunosuke Akutagawa as a purchase bonus! ★ Additionally, the following two items are planned to be rereleased! They both received quite a lot of votes during the Next Nendoroid and Rerelease Survey!ヾ(･∀･｡)ﾉ