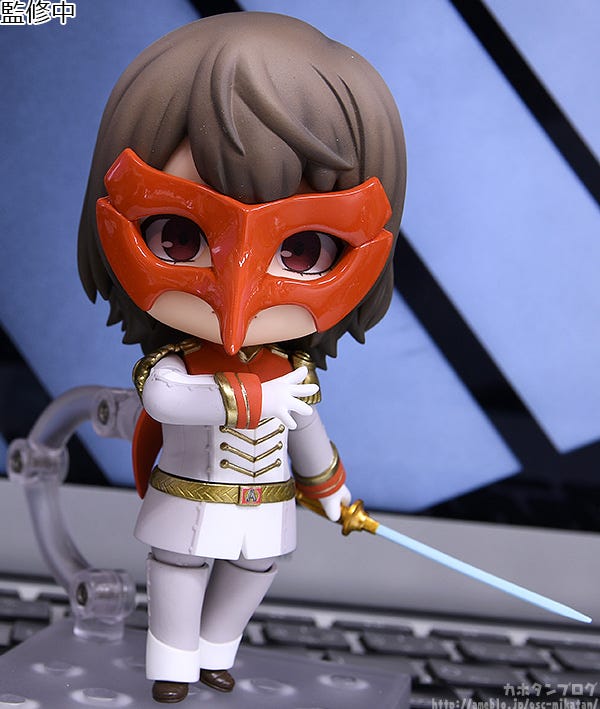 From the popular anime series “PERSONA5 the Animation” comes a Nendoroid of the high school detective also known as Crow, Goro Akechi, in his phantom thief outfit! He comes with several optional parts including his laser saber, ray gun and a miniature sized mask he can be posed holding. Additionally, a cut-in sheet is included to recreate Persona summoning sequences and All-Out Attack finishes!

He comes with three face plates including a standard expression, a laughing expression and a grinning expression! Be sure to add him to your collection, along with the other Persona series Nendoroids!

“My skills exceed yours!”

The high school detective chasing after the Phantom Thieves, Goro Akechi, has been recreated in Nendoroid form in his own princelike Phantom Thief costume!

After the painted prototype reveal at Wonder Festival 2019 Summer, he is going up for preorder very soon!

Everything from his fluffy looking hair and distinct red mask to the various gold decorations of his outfit has been carefully recreated! ▲Even in chibi form, the various small details of his outfit have been faithfully captured! ◎

For face plates, first let’s take a look at his standard expression! …so let’s see what’s beneath the mask! Yep, like the other Nendoroids in the Persona5 Nendoroid series, Goro’s mask is also removable. ☆

A handheld mask part is also included for recreating scenes with his mask off! ♪

Let’s take a look at the standard expression again! It has a determined, yet somewhat mysterious look to it… (/ω・＼)

That tightly closed mouth really gives you a sense of his strong-willed personality.

As for his second expression… Based on his appearance from his All-Out Attack finish, it’s his laughing expression! ◎

I love how you can see the details of this expression even with his mask on. ( ･ㅂ･)و ̑̑

Let’s take a look with the mask off! ♪ ▲The way you can see both his top and bottom row of teeth is really cute! ★

Next, let’s take a look at his third expression! This expression exudes a sense of confidence and condescension. A bit of a different look from the previous two!

As you can see, he’s equipped with his ray gun! ♪ ▲You can see how detailed the sculpting is!

He also comes with his laser saber! Hand parts to display him holding his weapons are also included for easy posing. ◎ ▲That grinning expression looks great with the mask on too! ♡

Have fun recreating your favorite scenes from the game using all of his expressions and parts! (｡･ω･ﾉﾉﾞ

A cut-in sheet and attachment part for displaying it in front of the Nendoroid are also included this time too! ♪ Available for preorder from the 8th of August to the 5th of September!